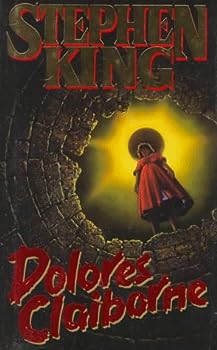 This description may be from another edition of this product. Master storyteller Stephen King presents the classic #1 New York Times bestseller about a housekeeper with a long-hidden secret from her past...one that tests her own will to survive. When Vera...

Published by Gerig , 9 months ago
It is in very good condition. Came through the mail with no problems. Well haven't gotten to it yet. Need to finish my other books I have. But thank you for the purchase of Stephen King books, to add to my little collection I have.

Published by Thriftbooks.com User , 14 years ago
This is a wonderful mystery that begins in a slow roll, but becomes a page turner. Delores Claiborne, a cranky old maid for a rich lady, tells the story of her life. Highly recommended, but it is not a horror story if that is what you are expecting from Steven King. Another lightly supernatural book, and different than King's usual stuff, is "The Girl Who Loved Tom Gordon." This story of a nine-year-old girl lost in the Maine woods is super. Read it! Click here: The Girl Who Loved Tom Gordon

Published by Thriftbooks.com User , 14 years ago
This book is really good. I just finished Stephen King's Geralds game right before this which I recommend reading before you read this so you understand some of what Dolores is talking about the image of "the" girl. This book makes you feel like it is a true story that is why I liked it so much. I can sort of relate to the character dolores some except I didnt do what she did with my husband :). Anyway I would definately recommend this. I would like to see the movie now to see if it compares to the book.

"An accident is sometimes an unhappy woman's best friend."

Published by Thriftbooks.com User , 17 years ago
The conventional street wisdom is that the best movies adapted from Stephen King novels are the ones that do not mention they are adapted from Stephen King novels. Of course, if you look at the films "Stand By Me," "The Shawshank Redemption," and "Dolores Claiborne" as well as read the King stories they were based on, you would find that they are atypical works in that they do not have the supernatural elements we have expected from King ever since he published "Carrie." Consequently I am mulling over the idea that in some distant time there could be an emphasis on King's "non-horror" fiction that would study him as an example of a regional author and make an argument that even if he was the best selling author on the face of the planet at one time, that he was actually a decent written (i.e., the Charles Dickens of the 20th century)."Dolores Claiborne" was written between October 1989-February 1992 (future generations of King scholars will have fun studying the overlap of his novels to create some tapestry of analytical insight) and the title character is a foul tempered, foul mouthed, old Yankee who has been living all her life on Little Tall Island off the coast of Maine. The novel is told in the first person by the 65-year-old Dolores, who has just been arrested for the murder of Vera Donovan, the even older richer lady who had been her longtime employer and who suddenly died in Dolores' care under extremely suspicious circumstances. In explaining what happened, Dolores not only tells her life story but also defends herself from the charge that she murdered Vera Donovan by explaining her involvement in the death of her husband Joe thirty years earlier on the day of the total eclipse.It takes a while to get used to the way Dolores talks. Those who have seen Kathy Bates' captivating performance in the film are in no way prepared for how thick King lays on the accent and colloquialisms with Dolores as narrator. But after a while you get used to the missing letters or idiosyncratic spellings employed by Dolores and focus on the story. However, the murder mystery is just the hook for this novel, where the bigger mystery is the true nature of the relationship between Dolores and Vera. It was strange enough that Dolores came to work for Vera, but even stranger that she stayed for decades as the old lady began her descent into senility. Meanwhile, Dolores has been putting up with her drunken, abusive husband Joe. But while she puts up with anything Joe heaps upon her, she is more protective of their daughter Selena.Ultimately, "Dolores Claiborne" is a character study and when the nature of the bond that was forged between Dolores and Vera is revealed, it is true to the characters and their situations. There is horror in this novel, but it comes from real human beings. This is not to suggest that King is making some sort of belated attempt to acknowledge real horror in the real world because those things have always been in his novels; the

A King book That's Just About a Person. Awesome!

Published by Thriftbooks.com User , 17 years ago
When I started reading this book, I was bracing myself for a bad experience--I'd just finished Heart of Darkness by Conrad, which is three big chapters and boring as all get out... And this book is one big chapter. I was also wondering what the "supernatural" plot of this book was--Most other Stephen King books I'd heard the basic gist before I'd begun reading, and this one offered me no clue. I was pleasantly surprised to find, however, that this plot only had a hint of the supernatural, and that it was basically a picture a small-town poor woman grafted onto the character of a tiny Maine island. Normally "mundane" fiction bores me to tears, but this was one of the best books I've ever read. It had the superb characterization of any Stephen King novel--better, in fact, than most of the others--but without the bone-chilling plots that simultaneously sucked me in and repulsed me. I found myself reading the novel, thinking, "This sounds like Mom," and "This sounds like Grandma." I sincerely felt like I knew Dolores.That isn't to say that it's without supernatural elements. The supernatural bears very little relevance at all, but it helps build the mood of the novel and the tension of the climax. Instead of the setting and the characters being centered around a supernatural plot and hook that relates (and indeed, is a metaphor for) some aspect of human nature, it's merely a portrait of a fictitious but nonetheless realistic person, with the supernatural and mundane plot elements centered around a lifelike character and setting.One thing worth note, though, is that this is very light reading for a King novel--I finished less than twelve hours after I started. The brevity of it aside, this is a great book, and it really gives you a picture of what it's like in any small rural hamlet... with just a glimpse of something darker that will satiate any King fan's need to escape the mundane.

Excellent Storytelling from a womans view for once

Published by Thriftbooks.com User , 21 years ago
I'm a guy and a rabid reader of Stephen King and this one is one of his best. The plot is excellent and for once, a book is told by a woman. I recommend it to anyone!

Dolores Claiborne Mentions in Our Blog