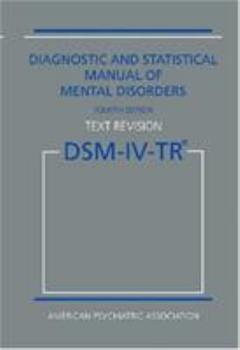 Since the DSM-IV(R) was published in 1994, we've seen many advances in our knowledge of psychiatric illness. This Text Revision incorporates information culled from a comprehensive literature review of research about mental disorders published since DSM-IV(R) was completed in 1994. Updated information is included about the associated features, culture, age, and gender features, prevalence, course, and familial pattern of mental disorders. The DSM-IV-TR(R)...

Published by Leila , 1 year ago
This book is in great quality and full of fascinating information. Very pleased with the price. This reads as a reference book and is used as that. Great for if you’re studying psychiatry. This book will come in handy for all studying mental disorders.

Published by Dr Shirley B Matthews , 3 years ago
The book is informative I took an course in theology seminary on mental Disorder but l lost thebook had to order another but my instructor made the class interesting love the book& class now I want to teach it thank you

An extraordinary window into the mechanisms of social ordering

Published by Thriftbooks.com User , 13 years ago
We live in increasingly complex societies where knowledge is endlessly expanding. Unless it is ordered, of course, information itself does us no good. The medical profession was among the first to recognize the need for ordered, cataloged information. I became involved with DSM by accident: one of my projects required me to include a few pages copied from the DSM, well within the limits of Fair Use. Normally I would have hopped over to the library, copied the pages and been on my way. One of the local libraries, however, had a circulating copy so I spent more time with the volume than I would have otherwise. Consider that there is no small amount of controversy surrounding the DSM (which, by the wsy, stands for "Diagnostic and Statistical Manual of Mental Disorders"). Many point wagging fingers at it for becoming involved with political issues, such as its well publicized dropping some years back of homosexuality as a "mental disorder". Others claim it is a make-word project for psychiatrists, psychologists, counselors, social workers and others who are presented with an ever expanding array of mental disorders which are, in turn, covered by insurance and become cash flow producers for practitioners. For the practitioner, however, it is easy to see that it provides a framework within which to compare their observations of a specific client against the collective knowledge of the American Psychiatric Association and its DSM publication committee. Leafing through it is a solid reminder of how fortunate many of us are: we don't have any of the major disorders described here. On the other hand, it is interesting to see how inventive the mental health professionals have been in turning so many seemingly commonplace conditions into "mental disorders" for which they can be paid to treat. (Like many, I have a somewhat jaundiced view of psychotherapy. I have know two women who spent more than 25 years each in therapy - before deciding to become therapists.) The introductory description of how the DSM came to be, how it is compiled and how it should be applied is fascinating in itself. The 1840 U.S. Census recorded only one variety of mental illness: "idiocy/insanity". By 1870, seven categories were listed. There are now, counting sub-divisions, hundreds of categories. It is indeed fascinating to read the descriptions of the disorders and the diagnostic criteria. It is possible - with a little stretching - to see that the future of such medicine may rest in automated diagnostics. The computer program Eliza and other experiments gave a foretaste of that. All in all, from a layman's perspective, a fascinating look at the human penchant for collecting, organizing, preserving and disseminating knowledge in action. Jerry

Published by Thriftbooks.com User , 19 years ago
I am a psychologist and I have been practicing for about 30 years. I remember the little DSM II. It was the size of the companion small book that can be purchased. The DSM has a history. There was actually a time when psychologists and psychiatrists were considering 2 different texts. Reading the reviewers was interesting as this is my tool to differentiate what my clients present. It is continually being improved and that is the focus of TR. There are subtle differences and clarifications. This book is the basis of identifying the specifics of what we are working with. The DSM IV was a collaborative effort to acurately represent international, cultural, and biological differences. My clients don't care but some don't know that an adjustment disorder of mood is different than dysthymia or depression which is again different from Bi Polar disorder. I probably wouldn't read it if I didn't do this kind of work. Yet it may be important to people with diagnosed illness. It can assist the capable reader in being an informed consumer.

Published by Thriftbooks.com User , 22 years ago
The study of mental disorders is an ever evolving process. It is good to see a revision of the old DSM IV which has been in use for the past five years. The book is printed in a easy to read print size and the layout has been updated. There will be other revisions so this is the first of many, until DSM V.
Trustpilot
Copyright © 2022 Thriftbooks.com Terms of Use | Privacy Policy | Do Not Sell My Personal Information | Cookie Preferences | Accessibility Statement
ThriftBooks® and the ThriftBooks® logo are registered trademarks of Thrift Books Global, LLC