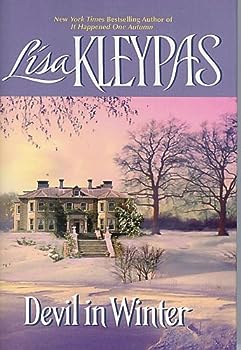 Devil in Winter (The Wallflowers)

(Book #3 in the Wallflowers Series)

This description may be from another edition of this product. "I'm Sebastian, Lord St. Vincent. I can't be celibate. Everyone knows that." Desperate to escape her scheming relatives, Evangeline Jenner has sought the help of the most infamous scoundrel in London....

Published by Thriftbooks.com User , 14 years ago
"The Wallflower" Series by Lisa Kleypas includes 4 novels. All four were very enjoyable. I couldn't pick a favorite. They were all books that you just didn't want to put down. I highly recommend them and think that they are four of her best books.

Published by Thriftbooks.com User , 15 years ago
Loved 'Dreaming Of You'? or Do you have a soft spot for reformed rakes? Then this is the book for you! Shy stuttering heroine, Evie, has a problem and her solution is to offer marriage to one of the most lecherous men in London. The heiress is desperate to get away from her physically abusive relatives, who attempt to force her into marriage with a cousin by any means neccessary in order to obtain her fortune. Thus, Evie has to make a deal with the devil -Sebastian, Viscount St. Vincent. Offer herself and her fortune in exchange for safety. Sebastian cannot believe who has called upon his bachelor residence and the proposal she makes. Its a win-win for him. He gains her fortune, gets to consummate the marriage and is free to continue in lecherous ways while she leaves to start her own independant life. Only things don't actually turn out that way. Sebastion has to deal with his new acquirement -a gambling hell, which is being sponged by dishonest empoyees and is run-down. Violence erupts everywhere, Evie's relatives come a calling and someone wants Sebastion and/or Evie dead. Sebastion is also plagued by the usual clenching of his heart whenever Evie is around and the fury he feels when she smiles at someone else. I loved the way these two fell in love. It sort of snuck-up-from-behind them. Many tender scenes. Great addition to the Wallflower series. Get it. You won't regret it. It stands on its own, but I do recommend you read the others in the series. I read this one first and I'm glad. I don't know if I would have loved Sebastion as much if I read It Happened One Autumn first, he's the villian.

Published by Thriftbooks.com User , 15 years ago
I've been waiting for this book b/c I LOVED the prequel - "It Happened One Autumn". This is by far the steamiest Kleypas I've ever read. I don't want to spoil anything . . . .first I must warn . . . Lord St. Vincent is by no means an honorable man. If you ever thought her previous heroes were abrassive - watch out - he's cruder than Nick Gentry and more blunt than Derek Craven. So if you don't like the romances where the hero is purposefully mean to make the heroine get away from him - consider yourself warned! (There were definitely some parts where I was like, "whoa - I can't believe he just said that . . .") And did I mention that he's hot? To say that he is arrogant is an understatement b/c he doesn't even try - his whole life he's used to women THROWING themselves at him.... But as his relationship w/ Evie unfolds they both open up their hearts and become devoted to eachother. I loved it!!!!!

Published by Thriftbooks.com User , 15 years ago
Where else can I begin, excpt to say that Kleyas only gets better and better with every book she writes, especially with her wallflowers series. Evie and St. Vincent's breathtaking story is the third in the series (First "Secrets of a Summer Night", then "It Happened One Autumn") and without a doubt the best one to date. Built on the basis of friendship, the series matures remarkably with each installment, always keeping the spirit of sisterhood and friendship intact throughout each. Evie has much to be grateful for in her small circle of friends as her story progresses. St. Vincent has returned from his foiled attempt to kidnap, wed and seduce Lillian Bowman. Beaten and downtrodden, he's not expecting the shy and reclusive redhead that insists on entry into his home. Even more surprising, he's astonished at Evangeline Jenner's proposal of marriage - a marriage of convenience in which she receives sanctuary and protection from her abusive family and he gets what he so desperately needs. That would be money, of course. The daughter of a notorious gaming club owner and a rumored half-wit, St. Vincent never thought he'd be stooping to such a level as to consider Evie's offer. Hard times call for desperate measures, on both their parts, and the two are quickly off the Gretna Green for an elopement of the not-so-heart. Both are determined to maintain their distance, but both are in for some eye opening experiences, ones where prior assumptions and false conclusions about one another will be tossed to the curb. Is it really possible for a self-professed rake to do a complete one eighty? The chances are good for St. Vincent, and watching his awakening to Evie's not so obvious charms is a wonderful experience. Kleypas's wallflowers series began with an endearing promise, among four unlikely friends, to aid one another in the begetting of husbands. That theme of spirited friendship has prevaled throughout the series and in Evie's story her friends come through for her at probably one of the most trying times of her life. A husband like St. Vincent was no easy cross to bear, a totally debauched rogue with no concerns besides ones for himself, he definitely makes it hard on Evie at times. However, at the same time, no one ever set out to take such devoted and gentle care of the fragile young woman. All but broken by the abuse of her "noble" family, Evie is frankly surprised at St. Vincent's efforts on her behalf. When he tries to bully her into a position she doesn't like, he's equally amazed at the fiery woman that steps out from behind her shell. Who'd have thought a self-professed wallflower could have such spirit and fortitude? The two are a fun and exciting couple to say the least. The attraction between the two was very well written and the chemistry practically leaped right off the pages, it was so intense. By far the best romantic achievement by Klepas to date. And it brought back fond memories of one of my favorites of hers, "Dreaming of You" (
Copyright © 2020 Thriftbooks.com Terms of Use | Privacy Policy | Do Not Sell My Personal Information | Accessibility Statement
ThriftBooks® and the ThriftBooks® logo are registered trademarks of Thrift Books Global, LLC