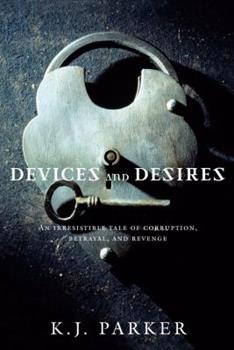 (Book #1 in the Engineer Trilogy Series)

When an engineer is sentenced to death for a petty transgression of guild law, he flees the city, leaving behind his wife and daughter. Forced into exile, he seeks a terrible vengeance -- one that will leave a trail of death and destruction in its wake. But he will not be able to achieve this by himself. He must draw up his plans using the blood of others. . . In a compelling tale of intrigue and injustice, K. J. Parker's embittered hero takes up...

Fantasy of the Highest Quality

Published by Thriftbooks.com User , 12 years ago
An incredibly detailed and intricate account of a man's descent into the murky world of international politics, intrigue, and corruption. The fantasy landscapes are completely believable, evoking the social milieu of Byzantium at times, with names plucked straight from the pages of the history of Constantinople. The extended treaties on the history and nature of engineering, the complex role of technology in the development of societies, and the minutiae of planning and constructing all manner of gadgets and machines is never anything less than fascinating. KJ Parker can also write some of the bloodiest and most authentic battle scenes I've ever read. He remains one of the most impressive voices in fantasy fiction.

Published by Thriftbooks.com User , 13 years ago
Devices and Desires is not like any fantasy novel that I have previously read. No gods or demons, swords & sorcery, priests or magic jewels. Just an excellent premise (chivalry vs. engineering) and very, very good writing. Every character in this book, even the shortest one-paragraph walk-ons, is finely and individually drawn. The author's fine sense of irony and exquisite asides - "The world is full of annoyances, none more infuriating than a fool with a valid point" - made me want to read it slowly, because the experience was so delightful that I never wanted it to end.

Published by Thriftbooks.com User , 13 years ago
Great book. Couldn't put it down. Caveat: I am an engineer, so a fantasy novel about what happens when an uber-engineer goes bad was very appealing. Very English sense of humor in the book.

Published by Thriftbooks.com User , 15 years ago
This was the first book by K.J.Parker that I've had the pleasure to read, and will certainly not be the last. I am new to the fantasy genre, though not quite a virgin (I'm well read in the Sci-Fi genre, if that counts for something). That said, "Devices And Desires" was clearly the best that I've read so far in the fantasy genre. Parker has clearly done her research with the sort of dilligence and attention to detail that rivals anything that could be expected of the central character of the book. The story centers around Ziani Vaazes, the unlikely unconventional protagonist-victim-anti-hero. He's a single minded genius of an engineer, who, after some unfortunate events, is forced to work with the material flesh and bone, of human motivations, alliances and betrayals, to construct his grand and terrible machine, that is the only means to achieve a purpose ludicrously simple and mundane. A purpose he cannot avoid working towards, as he puts it, any more than a rock pushed of a ledge can help falling. Devices And Desires is full of interesting personalities, depth in all fronts, intrigue of human relations with the often banal, almost trivial reasons that can lead to the slaughter of armies and the death of nations. And detail. Lots of detailed knowledge, yet never tedious. Also a well balanced end, tying up many lose ends, giving a feeling of an end of an epoch; yet hinting at things to come, and whole new battles to fight, as Vaatzes' machine grinds it's gears. As a SciFi fan with a naturalistic world view, I also appreciated the fact that the world is not infused with magic, ghosts and goblins, but rather is confined to the much more interesting wonders of the natural world. The only thing about the world of the book where I had to suspend my disbelief was the complete lack of religions (unless you count the mezentine's religious attitude towards precision of engineering, and the organization around it as religion). While being irreligious myself, I do believe that evidence shows that societies lacking religions or at least prominent superstitions completely (in reality, rather than just on paper) are as unlikely as any of the most fantastic absurdities fathomed by fantasy writers. This strange ommision can, howerver, be forgiven, as world created by Parker is so rich and satisfying in numerous other respects. Devices And Desires is an impressive piece of work, and a real page turner. While anchiously waiting for the sequel, I'll certainly look into Parker's other works.
Copyright © 2020 Thriftbooks.com Terms of Use | Privacy Policy | Do Not Sell My Personal Information | Accessibility Statement
ThriftBooks® and the ThriftBooks® logo are registered trademarks of Thrift Books Global, LLC