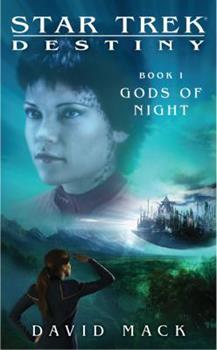 Half a decade after the Dominion War and more than a year after the rise and fall of Praetor Shinzon, the galaxy's greatest scourge returns to wreak havoc upon the Federation -- and this time its goal is nothing less than total annihilation. Elsewhere, deep in the Gamma Quadrant, an ancient mystery is solved. One of Earth's first generation of starships, lost for centuries, has been found dead and empty on a desolate planet. But its discovery so far...

Published by Thriftbooks.com User , 13 years ago
An amazing book. I don't do a lot of reading except for a few Star Trek Novels, and this one I couldn't put down. I finished the 400 page+ book in just a weekend. Can't wait for the rest of the trilogy to come out.

Published by Thriftbooks.com User , 13 years ago
I'm not going to go into any detail but I really enjoyed this book. I love the when they flip between Captain's in different time periods. I can't say enough about this book you just need to read it.

A worthy continuation of the Star Trek saga...

Published by Thriftbooks.com User , 13 years ago
The first of three novels in this trilogy, "Gods of Night" in an admirable contribution to the saga that is Star Trek. Pros: * David Mack has managed to craft an epic story that manages to weave together the various threads of the Trek universe with surprising dexterity. * This book FEELS like Star Trek. I can't explain that...the statement has to stand on it's own. * I'd grown tired of the Borg...most likely around the time that Voyager turned them into the villain of the week...but this story manages to make them exciting again. * Since Paramount has no intentions of telling more stories about the Deep Space Nine, Voyager, and Enterprise (NCC 1701-E) crews...Pocket Books is free to take bold steps forward...and the quality of the story is attributable to that sense of freedom. Cons: * I've done a pretty good job of keeping up with the Trek fiction that is set in the post-Nemesis era...but I still found myself confused by developments that are only mentioned in passing without elaboration or clarification for those who might not be up on the entire plot line. For example, a certain Admiral is dead...but I had no idea when he/she died. I can only assume it was in a book that I missed. * The next book doesn't come out until later this month! Hardly a true complaint...but there isn't much else to hang them on. I should note that I read the Kindle version. I was impressed with the format and the transfer. I saw no noticeable flaws or errors.

Published by Thriftbooks.com User , 13 years ago
When I first heard this trilogy was going to deal with the Federation and the Borg I was disappointed as I am tired of the Borg. I did have faith in David Macks writing though. As usual he has a has a winner on his hands. This is a must buy must read book. This is a book that for me was impossible to put down and I read all 400 plus pages in one sitting. Destiny book one starts a trilogy that will shake up the Trek universe. We get a good look at Ezi Dax as a starship captain in this novel. I like what I have seen, someone who has grown since DS9 and is confident and in command. We also see Picard's, Riker's and Hernandez's crews. The 4 crews in this book are well drawn and the action is continuous. I liked the brief parts of the book dealing with the Klingons deciding to come to the aid of the Federation after a Borg attempt to destroy Kitomer. This story is engaging and the story leaves one with many questions and speculations. I enjoyed the way that Mack weaves the story line of 3 of the crews. My only problem with the book is the ongoing Troi/Riker relationship problems. I have never liked the way this has been portrayed and still dont. That said I think Mack handled it in a reasonable way. I think there is more to this situation than it appears on the surface. Mack has a way of doing that. I do hope it is resolved by the end of the trilogy. I can hardly wait to see how the situation with the Borg resolves.

First in an all new Star Trek trilogy

Published by Thriftbooks.com User , 13 years ago
Gods of Night follows four captains and their crew: Jean-Luc Picard of the USS Enterprise, William Riker of the USS Titan, Ezri Dax of the USS Aventine, and Erika Hernandez of the Columbia NX-02. In the year 2381, the Borg have waged war on the Federation. And this time, their goal is not assimilation but annihilation. Meanwhile, the USS Aventine is investigating a centuries-old mystery - the Columbia NX-02 went missing in 2156 and has been discovered, seemingly abandoned on a remote, uninhabited world. With flashbacks between the various ships, not to mention centuries, readers must pay attention or find themselves easily confused. But to help with the large number of main characters, there is a handy appendix in the back of the book, which lists the different crew members of each ship, as well as their species. Every story that involves the Borg has been suspenseful and intense, and this one is no exception. Everything that the Federation knows about the Borg is now irrelevant. For reasons unbeknownst to anyone outside the collective, the Borg have changed their entire directive as well as other facets which had at least made them somewhat predictable. And Captain Picard's reaction to the Borg invasion is equally as unpredictable, reminiscent of the movie First Contact. With the main cast of The Next Generation, save Data (see Nemesis), either on the Enterprise or Titan, the crew retains their same great qualities and personalities that made them a personal favorite. Gods of Night contains everything great about Star Trek - advanced technology, intrigue, drama, relationships, danger, action, mystery, aliens, time travel, and blowing stuff up. Ending in a mild cliffhanger, readers will want to pick up the next, Mere Mortals, as soon as possible. With an exciting story, wonderful characters, and insurmountable odds to overcome, this is a trilogy no Trek fan will want to miss.
Copyright © 2020 Thriftbooks.com Terms of Use | Privacy Policy | Do Not Sell My Personal Information | Accessibility Statement
ThriftBooks® and the ThriftBooks® logo are registered trademarks of Thrift Books Global, LLC