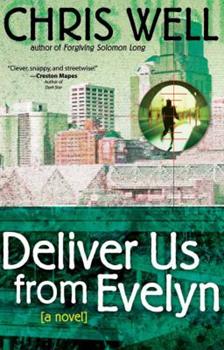 Deliver Us from Evelyn

Everyone from the Feds to the mob is scrambling to find the husbandof heartless media mogul Evelyn Blake. But no one can decide which is worsea'that heis missing, or that she is not ... Detectives Tom Griggs and Charlie Pasch are feeling the heat from on high toget this thing solved. Revengea'focused mobster Viktor Zhukovhas figured out Blake was tied in with a rival ganga's ambush. Rev. Damascus Rhodes (his current alias) figures a man of the cloth...

Quirky crime novel with a hefty dose of mystery

Published by Thriftbooks.com User , 15 years ago
If Deliver us From Evelyn were a movie, its TV Guide blurb might read: "After heartless media mogul Evelyn Blake's husband disappears, a young police detective determines to unravel the mystery." And while that is the essence of this novel, the description hardly does it justice. Evelyn is more than just another crime story. Yes, it's about a missing Warren Blake. Yes, it's about a police investigation. Yes, Evelyn Blake is ruthless ala the character Miranda Priestly from The Devil Wears Prada. But it's also about redemption, searching for meaning in life... and comics. Detective Charlie Pasch returns from Well's first novel Forgiving Solomon Long as the central viewpoint character, but his is hardly the only perspective. From the anonymous blogger spilling Blake Media secrets, to the con-man determined to pull off another elaborate heist, Deliver Us From Evelyn jumps all over Kansas City. But it's the bad guys who steal the show. Especially the con-man who's posing as a minister. This guy has attitude, and it makes for some interesting exchanges, because Chris Well has a way of making even the hardest criminal likable. You might even have to squelch a chuckle in a few scenes. (After all, cough cough, this is a crime novel.) Not so likable is freezer cold Evelyn Blake, who deserves her employees' agnomens of "Queen Evel" and "Cruella D'Evelyn". And we've got a few mob henchmen as well, who are perfectly happy bumping people off. Perhaps the most intriguing character is the anonymous blogger. The conversational blog entries are peppered throughout the story and make for a nice change of pace amidst the police investigation and con games. An insider at Blake Media, there's no corking this person's opinions, and suspicions, of Evelyn. Only when Blogger and Detective Pasch join forces does the truth about Warren Blake's whereabouts finally surfaces. Occasionally the ensemble cast made it challenging to know exactly who to root for, and I would've liked to have seen a little more description of what exactly Evelyn Blake looks like, but most readers probably won't even notice this amidst the zipping plot. Loaded with pop culture references, including mentions of Switchfoot and The Wizard of Oz, perhaps most central to the plot of Deliver Us From Evelyn are comic books. It's no secret Charlie Pasch can talk for hours on the subject, and comics ultimately play a part in piecing together the puzzle. But if you're not a comic fan, don't worry. The comic references don't overload the novel. They simply embellish it. I came away from the story with a new appreciation of their value. Compelling, quirky, and engaging, Deliver Us From Evelyn will be a welcome addition to your bookshelf. --Reviewed by C.J. Darlington for Infuze Magazine

Published by Thriftbooks.com User , 15 years ago
Here's my review, which was included in the July 2006 issue of CCM Magazine (with a few extras added in that were cut from the original column due to space constraints): CCM's very own Chris Well returns with a striking sophomore effort, Deliver Us from Evelyn (Harvest House). This thriller packs all the punches, capers and obscure allusions you've come to expect from Well, a novelist and long-time Christian music industry writer and editor. In this offering, the heartless Evelyn Blake lords over the family media empire even as her reclusive billionaire husband has vanished. You know how they say art imitates life? Well, we're not saying that's completely accurate because our publisher isn't hitched to a reclusive billionaire husband. Oh, and, no, she's not really heartless. So, I guess life doesn't actually imitate art. Chris even offers the disclaimer in his dedication that the title character is in no way, shape or form based upon our very own, beloved publisher. Does that smack of a cover up?! Nah. But it's fun for us, nonetheless. Do yourself a favor and pick up a copy of this book! It's definitely great summertime fare!

DELIVER US FROM EVELYN really delivers

Published by Thriftbooks.com User , 15 years ago
This was a real treat! Nobody writes like Chris Well, his style is fun and quirky, fast paced and intelligent. Like its prequel, FORGIVING SOLOMON LONG, DELIVER US FROM EVELYN is set in Kansas City, Mo. Detective Tom Griggs and his partner, Charlie, have the never ending job of taking out the city's trash. But as soon as they bring down one organized crime king-pin, three new ones emerge. The snooty media mogul, Evelyn Blake's, husband is missing, but she doesn't seem to care. A mysterious employee is spilling the goods on their blog and she's livid. Add to the mix a con-artist with all the luck of Wylee Coyote and you have a recipe for a whole lot of fun.

OMIGOSH, WHAT A FUN READ! Darkly funny with a subplot sure to delight comics fans!

Published by Thriftbooks.com User , 16 years ago
While FORGIVING SOLOMON LONG was a fine read, and I recommend it, this follow-up goes a few steps beyond. It's smoother, I think, in structure. It's got a big funny bone around its criminally dark heart. I like Chris' style. He uses fragments well and plays around with conventional POV for good effect. His chapters are brisk and short and move things along nicely. He must have taken note of complaints about loose ends in FSL--I wasn't complaining, btw, and I was satisfied with the conclusion-- cause this baby has multiple epilogues, from the touching to the outright hilarious. I suspect the whole tv cables things is some kind of wry metaphor . . . Chekov would be proud of Well's use of a particular "prop". Comic and film fans will enjoy references to some faves, including philosophical dialoging on the subject of comics and their readership. The spiritual content is pertinent; forgiveness and repentance are key issues, as they were in FSL. While one doesn't need to read FSL to follow the plot and characters of and enjoy DELIVER US FROM EVELYN, it sure is nice to catch-up with the detectives and see things change for them in certain ways. Others have provided a synopsis of the plot, but just so you know: Billionaire Warren Blake is missing. An anonymous blogger is writing about it--and her special relationshihp to the man--and she's also dropping hints that it's foul play. Mobsters of various factions are involved, making things a bit complicated. And Blake's egocentric, volatile, flighty, power-mad whackjob of a wife is looking mighty suspicious, even as she goads the political powers to put pressure on the police force to find her husband or solve the mystery of his disappearance. So, here come the good guys of the KCPD--the emotionally troubled Griggs, the pop-culture enthusiast Pasch, etc. Add in some weird goings on at a comics book store, and an inept and cowardly wiseguy who bungles every plan he makes, and you've cooked up a pretty cool bit of crime fiction. The pace is fast, the tension is delicious, and the humor gives it that extra pizzazz that makes this a keep-me-up-til-the-wee-hours read. I suggest you just buy it, enjoy it! Mir

Published by Thriftbooks.com User , 16 years ago
When media billionaire Warren Blake disappears, the poor minions at his publishing company are forced to follow every whim of his not-very-heartbroken wife, Evelyn -- otherwise known as Queen Evel. Someone at the office has started a blog speculating on the mystery of Blake's disappearance, and little dreams of the havoc her anonymous posts will cause. Now that crime boss "Fat Cat" is out of the picture, other crooks are looking for a piece of the Kansas City crime pie. The Russian mafia meets with Evil Duke Cumbee's men only to find out it's a trap. A thug from the bottom of the pile gets caught in the wrong place at the wrong time, and soon is on the run for his life. When Evelyn Blake finally decides to make a fuss about her missing husband, members of the Kansas City Police Department, including detectives Tom Griggs and Charlie Pasch, are forced to drop everything and find him. The politically-charged case guarantees conflict between local cops and the Feds, which include Griggs' friend O'Malley. After "killing" his previous alias, the Right Fair Doctor Reverend Damascus Rhodes is ready to con someone new for a living, and the grieving rich Mrs. Blake seems the perfect target. With multiple subplots stacked up like a parfait dessert, Chris Well once again delivers a delectable novel. He places the scenes like a movie director, using a few phrases at the beginning to paint a visual picture of what's happening, letting the action play to the right moment, then cutting to the next scene. Several familiar characters from Forgiving Solomon Long are back and continue to deepen, but Deliver Us from Evelyn can be read on its own. Whether you read it for the rapid-fire plot, witty humor, or zany allusions, you're sure to enjoy this treat. -- Katie Hart, Christian Book Previews.com
Trustpilot
Copyright © 2022 Thriftbooks.com Terms of Use | Privacy Policy | Do Not Sell My Personal Information | Accessibility Statement
ThriftBooks® and the ThriftBooks® logo are registered trademarks of Thrift Books Global, LLC