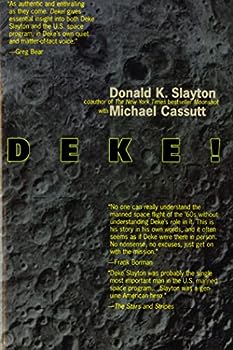 Deke! U.S. Manned Space: From Mercury To the Shuttle

Deke Slayton was one of the first seven Mercury astronauts--and he might have been the first American in space. Instead, he became the first chief of American Astronaut Corps. It was Deke Slayton who... This description may be from another edition of this product.

Details about life in the early astronaut office.

Published by Thriftbooks.com User , 17 years ago
The best insiders book about the early astronaut office. It has so much good stuff about which astronaut was assigned what duties and a good behind the scenes view of each spaceflight. There are also good stories about some of the lesser known astronauts who never flew in space. A great book!

Published by Thriftbooks.com User , 17 years ago
A revealing story of the least known of the original mercury astronauts, this book gives great details of Deke's life from the beginning of his childhood to his tragic death. Deke, himself knew of the brain tumor which eventually ended his life. He was worried that it would affect his memory, so we are able to benefit from his detailed recollections. Lucky for us that he was able to complete the book. This is a rare insight into a hero, written at a time in his life were he was very reflective. He obviously wanted to leave an accurate picture of his life (maybe his perceived misjudgment of Gus Grissom in "The Right Stuff" was a motivation). In any event, thanks Deke! I hope to meet you one day!

A True Hero.. Mercury to Flight Operations to Apollo-Soyuz

Published by Thriftbooks.com User , 19 years ago
As one of the original Mercury 7 astronauts, Deke Slayton was grounded before his Delta 7 seven flight (the one scheduled after Glenn's first orbital flight). Although disappointed, he overcame this set-back and became Director of Flight Operations which means he was responsible for the astronauts and flight selections. He had the respect of the group and treated them fairly.DEKE is honest, objective, and written in a matter-of-fact manner. The most interesting part of the book is the "behind the scenes" information on crew selection and rotation. A very interesting fact is that Deke, Kraft, and Gilruth agreed that a Mercury astronaut would make the first landing on the moon if possible. Gus Grissom was unofficially tapped to take the first step on the moon prior to his tragic death on the pad for an Apollo 1 test.Ten years after being grounded in Mercury, Deke gets clearance to fly in the joint US-Soviet Apollo-Soyuz mission. This was long overdue and add poetic justice for someone responsible, in large part, for NASA's success.I recommend reading Chris Kraft's Flight book first. It gives a detailed historical perspective while DEKE fills the gaps. My respect for Deke Slayton is even greater than ever after reading this book.

Great book by a great man

Published by Thriftbooks.com User , 19 years ago
As a person born in the late 60's, I was facinated with the space program and astronauts while growing-up. I've read virtually every autobiography written by an astronaut from that era from the good (Michael Collins) to the terrible (Gordon Cooper) and rate this one #2, only sitting behind Collins' Carrying the Fire. Slayton was a matter-of-fact, pull-no-punches man who wrote what he felt. I especially enjoyed reading his insights on why he gave certain astronauts certain missions and was amazed when he stated that if Gus Grisson would have lived, he would have been the first man to walk on the moon (instead of Armstrong.)If you are interested in the space program, read this book (instead of "Moonshot", for example)--you will not be disappointed.

Indispensable for students of Apollo

Published by Thriftbooks.com User , 23 years ago
For anyone with a deep interest in Mercury/Gemini/Apollo, this book is a must read. It provides excellent insight into the test pilot perspective on the space program. Deke's comments on astronaut selection and who he wanted to be first on the moon are not to be found anywhere else. However this book is definitely not the first one to read on this era. A basic understanding of the architecture and operations of Apollo is assumed. But if you can appreciate why Deke notices every time Gene Kranz leaves the MOCR, this book is for you. For a scientist's perspective on this era, Don Wilhelms' "To a Rocky Moon" would make an excellent companion. Add the hard-to-find "Apollo: Race to the Moon" and you have a great education in Apollo.
Trustpilot
Copyright © 2022 Thriftbooks.com Terms of Use | Privacy Policy | Do Not Sell or Share My Personal Information | Accessibility Statement
ThriftBooks® and the ThriftBooks® logo are registered trademarks of Thrift Books Global, LLC