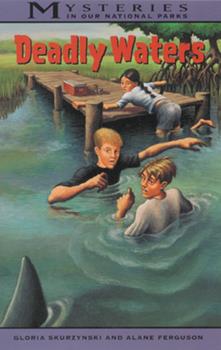 (Book #4 in the Mysteries in Our National Parks Series)

While in Florida's Everglades, the Landons come face-to-face with sharks, alligators, and a stranger who steals Jack's camera. In tracking down the thief, the kids unravel a mystery of why the park's already endangered manatees are dying. Includes a map of the Everglades Park.

Published by Thriftbooks.com User , 13 years ago
I teach fifth grade in Fort Myers, Florida. We are not too far from Everglades National Park. I use this book every year as a novel unit. It is a wonderful adventure story about 3 teens in Everglades National Park. It is very real for Florida students, but could be used by any teacher. It is has good readability for fifth or sixth grade students. It addresses environmental issues relevant to south Florida as well as a great description of the Everglades. It is a great visual for the active mind. My students love it because each chapter ends with a "cliff hanger" and they want to continue to read each day. It also has an Accelerated Reader test.

Published by Thriftbooks.com User , 15 years ago
Deadly Waters I thought this book is very suspenceful it makes you keep trying to guess what the outcome will be. Like every other book from Gloria Skurzynski and Alane Ferguson this is a great book. Deadly Waters is a book about a boy named Jack his sister Ashley and their parents Olivia and Steven. Olivia is a veterinarianand often gets called to national parks to ivestigate on strange thigs happening with the animals. Steven is a photogropher and he goes with Olivia to take pictures of the animals. They are both take foster kids on trips with them somtimes. In this book They go to Florida everglades to investigate why the manitees are dying, and they bring a boy named Bridger. Then their parents best friend Frankie brings the kids to a place named Watsons Place and then the find a pelican in the water with a fishing line in its beak and the Frankie drops the kids off at Watsons Place and goes back to the info center to drop the pelican off. Then Jack sees a guy in a boat, and then the guy drives over to where they are and says his name is Gordon and he talks to the kids and then steals Jack's camera and drives away. Then they find a manatee and its back was cut from the prpeller and it has a baby with it then a 7ft shark comes and they all get out of the water and Bridger jumps into the water to protect the manatee and hits the shark with the fishing rod. I think this book would bee for a 8-13 year old or who ever likes a mystery book.

Action-packed excitement with many strong characters.

Published by Thriftbooks.com User , 19 years ago
I am a lower elementary teacher (first through third grades) and each week we have storytime twice a week. Last year, I read this book to my students representing the "mystery" genre. Not only is this a wonderful read-aloud book for any age group, but it is a perfect mystery as every single chapter ends with everyone wanting to know what happens next. I had every student on the "edge of their seats" so to speak, which is a very challenging thing to do when you have such a diverse group.This year, when I started storytime, my students asked if I was going to read Deadly Waters again. I told them I'd get another in the series and read that to them. I just hope the others are even half as good. Just as a side-line: the characters are truly one of the best things about this book. Strong female and male characters that the students could really root for and understand.

Published by Thriftbooks.com User , 20 years ago
This is a great book.I really got into the book just by reading the first few chapters.My favorite character in the book is Briger,because he is the oldest and the strongest and the bravest.This is a good book for ages 11 and up to adult.I gave it 5 stars,becuase it is one of the best books I have read in my life.The family in the story is big,there names are Steven which is the dad,Olivia which is the mom,and then there is Ashly,Jack and Briger who are the sons and the daughter.It takes place in the Everglades.I liked it because it was a mystery because the manatees where dying and I wanted to find out why the were dying.

Published by Thriftbooks.com User , 21 years ago
This fourth book in the National Parks Mystery series is set in the Florida Everglades where Jack and Ashley's mother is investigating mysterious deaths in the manatee population. The story moves at a fast pace, balancing action with accurate information about the wildlife found in the Everglades. This book follows much the same formula set in the first three books in the series: Jack, Ashley and Bridger (the latest foster child the Landon family has taken in). explore the National Park and do some unofficial investigating while their parents aid the official investigation into the manatees' deaths. These books are well written and very well researched. Both mystery buffs and animal lovers should find plenty to keep their interest. The photographs in the middle of the book are a great bonus. Fans of Jean Craighead George's ecological mysteries are sure to enjoy this series as well.
Copyright © 2020 Thriftbooks.com Terms of Use | Privacy Policy | Do Not Sell My Personal Information | Accessibility Statement
ThriftBooks® and the ThriftBooks® logo are registered trademarks of Thrift Books Global, LLC