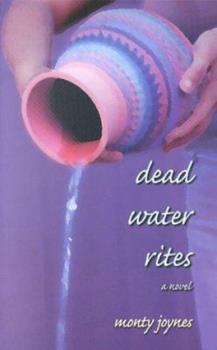 The water-which comes naturally from the earth and sky, the priceless compound of elements that forms and supports life-is dying. Warned in a vision, the tribal elder of the pueblo sends his chosen one to discover the fate of the precious life source. That man is Anglo, formerly known as Winn Conover, a white man who shares the work and vision of the tribe. Anglo must discover the true spiritual nature of the water in order to save it from encroaching...

Published by Thriftbooks.com User , 19 years ago
Dead Water Rites is the fourth book in the Booker Series by Monty Joynes, however readers new to Joynes will understand its powerful message of man's fate if he continues to rape the earth. A white man known sometimes as Booker and sometimes as Anglo "searches for new identity and spiritual completeness among the Pueblo people." He learns how water is the very lifeblood of the People, and that they regard it as a "living being." A tribal elder sees the water drying up and dying, and trusts Booker with the mission of finding the source of the "sick water." If the water is truly dying, then the dead water rites will be performed, and life will cease to exist. As he searches for the sick water, Booker also continues his journey of spiritual growth. He meets a militant female environmentalist, and begins learning of some of the politics involved in water rights. He also learns that perhaps the celibate life isn't right for him after all. A group of land developers with the philosophy that "any day is a good day to make money" are also looking at the water. They draw up a proposal for a gambling casino, replete with promises of economic security. Buried in the fine print are the clauses handing over all water rights. A former real estate developer himself, Booker recognizes the true impact of the casino on the People. He explains this to the tribal elders, who say they will "continue to pray and seek a vision." Booker and the young woman are seriously injured in a car accident, from which it takes months to recover. The developers move ahead unhampered with their plans. Dead Water Rites "is lucid and literary, an articulate and artful plea to cease our self-destructive exploitation of the environment and native people." Those who read it will gain a new respect for the liquid essential to all life on Earth, and a better understanding of those who seek to keep it alive.
Trustpilot
Copyright © 2022 Thriftbooks.com Terms of Use | Privacy Policy | Do Not Sell My Personal Information | Accessibility Statement
ThriftBooks® and the ThriftBooks® logo are registered trademarks of Thrift Books Global, LLC