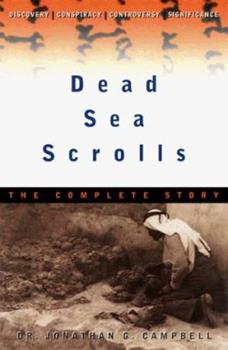 Campbell provides a balanced and compelling look into all the aspects of the story of the Dead Sea Scrolls, analyzing the theories linking Jesus to the Scrolls, showing how the Scrolls relate to early Christianity, probing the relationship between the Bible and the Scrolls, and considering the mystery of the Scrolls' authorship. of photos. Maps.

Published by Thriftbooks.com User , 20 years ago
An intelligent, readable introduction to the Dead Sea Scrolls, covering the discovery of the documents, their analysis by teams of experts, their probable origins, and their implications for our understanding of Judaism and Christianity. Dr. Campbell avoids (and debunks) the sensationalist claims of some other writers in this field, while presenting the facts in a sober, no-nonsense tone. My only complaint is that his writing style is dry and somewhat droning. (Example: "In the following section, the merits of two alternative theories regarding the function of the Qumran will be evaluated. The remainder of the chapter will then proceed to examine ...") A livelier style would have improved the book; even so, it's a quick, factual, and serious presentation that will interest anyone looking for information on the Qumran Scrolls and the community behind them.

Published by Thriftbooks.com User , 21 years ago
The Dead sea scrolls by Jonathan Campbell is truly very informative, but at the same time as the title says, really misleads the content, cause one would really buy the book under the impression of having more script from the scrolls and more comparison, rather than history lessons (not that it is bad) but we all want to be more enlightened in the true subject at hand.

At last a sane ,account of the scrolls' place in history .

Published by Thriftbooks.com User , 23 years ago
Having read over the years several books about the Dead Sea Scrolls ranging from the partisan through the sensationalist to the outright looney it was great to come across an up to date(i.e. including the final release of documents in 1991) and accessible account of these extraordinary documents written by someone totally in command of the relevant material and most importantly with no sectarian axe to grind. Campbell is particularly good on the Scrolls' historical setting and builds up a convincing picture of the development of different strands of religious thought, belief and practice within second temple period Judaism. If you approach this book without prejudice, as Campbell does the available facts,you will come to understand the origins of modern Judaism and Christianity. I picked this short book out of piles of tomes on display at the Qumran tourist centre (mostly of the type referred to above) and for the rest of my holiday in Israel I couldn't put it down. Probably this book will annoy fundamentalists of all stripes, but that is the fate of all sane tolerant thinkers through the ages.
Trustpilot
Copyright © 2022 Thriftbooks.com Terms of Use | Privacy Policy | Do Not Sell My Personal Information | Accessibility Statement
ThriftBooks® and the ThriftBooks® logo are registered trademarks of Thrift Books Global, LLC