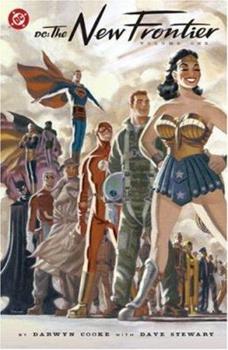 by Darwyn Cooke and Dave Stewart

Written by Darwyn Cooke Art and cover by Cooke Reoffered to coincide with BATMAN: EGO AND OTHER TAILS, this volume collects Darwyn Cooke's acclaimed journey from the end of the Golden Age to the genesis of a bold new heroic era in the late 1950s! Volume 1 collects DC: THE NEW FRONTIER #1-3 plus the three extra pages originally seen only in Wizard Magazine! On sale May 2 - 240 pg, FC, $49.99 US - Relist

Wow...Very similar to Civil War if anyone is taking bets

Published by Thriftbooks.com User , 15 years ago
Marvel's new summer crossover event, Civil War, surprisingly has a lot in common with New Frontier, and that's a complement. Both dealing with political issues; Frontier tackles the McCarthy era's communist outcry, only it's against the superheroes who won't unmask themselves; Civil War on the other hand is a war between those who register with the government and reveal their identity, and those who fight for their ideals and personal freedom. What Civil War lacks though is the nostalgic 50's feel Frontier possesses, and reads with a sense of urgency that only the God like heroes of the DCU can give. New Fronteir should not be missed, and as an avid reader ot original graphic novels and more mainstream books, this is by far one of the best of any I've read so far. The art and writing mesh so perfectly it could only be compared to the perfect union of Invicible, anything by Doug Tennapel, and Box Office Poisen. The only downfall of New Frontier is the fact you HAVE to read the second book to enjoy the amazing story it possesses. Whether that's a good or bad thing is up to you and your wallet to decide. Either way you'll get a real bang for your buck.

The Silver Age in its original social-political context

Published by Thriftbooks.com User , 15 years ago
Darwyn Cooke's bold plan with his 2003/04 "New Frontier" miniseries was to provide a uniting storyline for all the major DC characters from the late 1950s, including not only such classic "Silver Age" characters as the Barry Allen Flash and the Hal Jordan Green Lantern but also such B-list adventure stars as the Challengers of the Unknown and the Suicide Squad, in their proper Cold War context. Superman and Wonder Woman thus become spearheads for the Eisenhower foreign policy in Indochina; Lois Lane is portrayed -- somewhat jarringly -- as a hawkish redbaiter, while Hal Jordan's employer Ferris Aircraft becomes positioned at the very heart of the 1950s American military/industrial complex. In narrative terms, Cooke has some trouble keeping his pace going. There are too many repeated tense encounters between government agents and the series' central heroes, and in his attempts to bring in every DC-National comic character from the period Cooke allows too many boring langours (especially in the opening sequence involving the Losers and a later episode involving the Viking Prince). And the basic plot structure of the miniseries (collected in paperback in a two-part series), like so many recent comics miniseries of the last twenty years, owes perhaps too much to Lovecraft's "Call of Cthulhu." But when he really gets going, as in the prize fight in Las Vegas sequence (spotlighting a battle between Flash and Captain Cold) in the first of the two-part collected miniseries, Cooke can really cook with gas. Best of all, he's an absolutely marvelous visual artist, and his compositional sense is superb on almost every page and panel. He does a splendid job evoking the famous "Googie" design of buildings, furniture, and signage from the period, and his cartoonish approach to drawing characters seems simultaneously reminiscent of the animation from the period while also doing a very strong job conveying facial expression and emotion (particularly with the characters of Barry Allen, Ace Morgan, and Carol Ferris). Buying this series either in hardcover or in paperback is an expensive proposition, but it is one of the finest and most visually inventive works DC has produced in years, and thus worth the cost.

Published by Thriftbooks.com User , 16 years ago
Note: This review refers to DC: The New Frontier Volumes I and II. If you are a DC fan-I mean a hard core, DC or bust fan-you will love, and I mean LOVE DC: The New Frontier Volumes I and II. I remember seeing the first issue of this series when it came out in single-issue format and thinking that it seemed a bit remedial. Overly simplistic. I made this deduction based off of looking at the art alone, not by reading any of it. However, I later discovered this book had been receiving critical acclaim from many established publications such as the New York Times, so I had to give the trade paperbacks a shot. I'm glad I did. You see, the art is supposed to look a bit unpretentious because the story is set during the Silver Age of comics. For you non-comic book people, that means it takes place basically in the late fifties, early sixties. The Silver Age was when old characters from the thirties and forties received major revamps, such as the Flash, the Atom, and Green Lantern. It also introduced new characters such Adam Strange. DC: The New Frontier takes this Silver Age era and delivers a story with modern day sensibilities. For instance, Superman and Wonder Woman are trying to clean up Korea while maintaining some sort of autonomy from the US Government for whom they work. The space program is in full swing with Hal Jordan desperately wanting to be a part of it so he can reach the stars. A horrifying Batman realizes he may need to lighten up a bit after a disheartening experience with a child. J'onn J'onzz is unexpectedly transported to Earth and must acclimate or perish. We get traditional appearances from Hour Man, Aquaman, and Green Arrow. We see the Challengers of the Unknown, the Sea Devils, the Suicide Squad, and other favorites from the sixties, as well as re-imagined characters like Steel. You see, in the comics, originally, all these things were spread out over decades, but now, the author and illustrator, Darwyn Cooke, has blended them all together into one cohesive plot line that culminates with all the heroes joining forces in a very non-traditional manner against a foe that could destroy the world. This collection honestly feels like if heroes were real, this is how they would act with each other and how our government would react to them. DC: The New Frontier is a captivating read and I urge you to give it a try immediately. It will quickly become one of your favorites. ~Scott William Foley, author of Souls Triumphant

Published by Thriftbooks.com User , 17 years ago
Wow, I couldn't put this book down, the story is so rich & entertaining!! In vol. 1, Darwyn Cooke focused primarily on characters that are not necessarily on today's DC's most exposed titles (such Green Lantern's Hal Jordan, Challengers of the Unknown, Suicide Squad, etc.) Although I'm sure that most DC Comics characters have exciting histories & personalities, I am only mostly familiar with Batman, Superman & JLA members. This book puts together the background story of all characters very nicely & without any unnecessary focus on any one of them. After reading this book, I gained a lot of knowledge for these characters & a lot of new respect for Hal Jordan =).
Trustpilot
Copyright © 2022 Thriftbooks.com Terms of Use | Privacy Policy | Do Not Sell My Personal Information | Accessibility Statement
ThriftBooks® and the ThriftBooks® logo are registered trademarks of Thrift Books Global, LLC