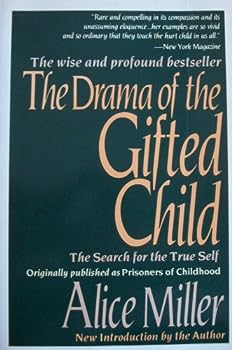 Drama Of The Gifted

This bestselling book examines childhood trauma and the enduring effects of repressed anger and pain. Why are many of the most successful people plagued by feelings of emptiness and alienation? This... This description may be from another edition of this product.

A Wise & Perceptive Book That Changed My Life!

Published by Thriftbooks.com User , 19 years ago
Alice Miller's "Drama Of The Gifted Child," was originally published as "Prisoners Of Childhood; The Drama Of The Gifted Child," in 1981. I read the book over 20 years ago, and recently reread it. I find that it is just as relevant, wise and perceptive today as it was then. Ms. Miller was a practicing psychoanalyst, who gave up her work with patients to write books, for the layperson, primarily dealing with early childhood abuse. In a new Forward, Miller continues to disavow psychoanalysis. Although I am not in agreement with her on this, she continues to be one of my heroes. Ms. Miller, who writes an elegant and easily understandable prose, discusses here the issue of children raised by a narcissistic parent(s). She explains that this book is not about high I.Q. children, but about those who were able to survive an abusive childhood because they developed an adequate defense system. At a very early age the child intuitively apprehends the parent's needs. Since the parent, especially the mother, is the child's soul source of survival, the child strives to please, fearing disapproval, or abandonment. Thus, the child sublimates his needs for the parent's. Roles reverse and the child frequently takes on the parent's responsibility as emotional caregiver. This impedes the growth of a child's true identity, and a "loss of self" frequently occurs. The child adapts by not "feeling" his own needs, and develops finely tuned antennae, focusing intensely on the needs of the all important other. Ms. Miller writes, "An abused child, (emotionally), does not know it is being abused, and in order to survive and avoid the unbearable pain, the mind is provided with a remarkable mechanism, the 'gift' of 'repression,' which stores these experiences in a place outside of consciousness." Although, later in life, these "prohibited" feelings and needs cannot always be avoided, they remain split off and the most vital part of the true self is not integrated into the personality. The results are often depression, and tremendous insecurity. Alice Miller makes her readers aware of the unexpressed sufferings of the child and the tragedy of the parent(s) own illness. As she frequently states, "any parent who abuses a child," knowingly or otherwise, "has himself been severely traumatized in his childhood, in some form or another."Gifted children are often the products of emotional abuse by a narcissistic parent. However, if the child's great need for admiration is not met, for his/her looks, intelligence or achievements, he/she falls into severe depression. Miller says one can only be free from depression "when self-esteem is based on the authenticity of one's own feelings and not on the possession of certain qualities."Children need a great deal of both emotional and physical support from the adult. According to Miller, this adult support must include the following elements in order for a child to develop to his or her full potential: "Respect for the child; respect for his r

An Extremely Brave and Insightful Work

Published by Thriftbooks.com User , 22 years ago
I am on my second reading of "Drama" and am finding it even more riveting. It seems written for me personally. Miller takes on the reigning Freudian methodology with the heretical insight that even well-meaning parents can contribute to the suppression of their children's true selves. It is common knowledge that Freud initially determined that his "hysterical" female patients had often been sexually abused by men in positions of trust and power in their lives, but that the medical society of the time refused to believe this. In order to not be thrown out of the Viennese Medical Society, Freud came up with ingenious but destructive theories (Oedipal complex, etc.) to explain his patients' symptoms. Miller takes us back to the truth - that early childhood trauma and betrayal causes peculiarly destructive symptoms in adult life, and that the situation is further complicated by the psychological process of denial and suppression. The victims even feel positive about their tormentors, so that they can survive (the "Stockholm syndrome"). Miller relates this process to the now well-documented "post-traumatic stress syndrome", but argues that it is even more difficult to understand and undo when the trauma happens not to fully formed adults, but to pre-verbal children, who can only feel the pain, but cannot express its cause. The memories can be suppressed, but the feelings and their effects cannot be eradicated without witnessing them as an adult. This is a very liberating discovery for one who has been traumatized as a child, and leads to methods of recovery that provide hope for adult sufferers. Interestingly, in the preface to the 1994 edition, Miller enthusiastically credits the methods of J. Konrad Stettbacher with helping her overcome her own symptoms of childhood abuse. In the 1996 version, this forward is omitted, as is any reference to Stettbacher's work. I wonder if that is because Miller has changed her mind about his methods, or if there was some kind of proprietary struggle? In any event, "Drama" is a seminal work, and will likely reverberate in the psychotherapy community for a long time to come. A must-read for anyone struggling with the effects of their childhood - and who isn't? Give a copy to your shrink, your parents, your kids, your significant other...but be prepared for some interesting dinner conversations!

Possibly the most exciting book I've ever read

Published by Thriftbooks.com User , 23 years ago
Miller concicely depicts the damage done by child abuse. I find myself coming out of the pages to meet myself. If the book were any stronger it would have to be sold by prescription.

Published by Thriftbooks.com User , 23 years ago
A very insightful book. It felt like Alice Miller had written these pages for me. I even found myself reading whole sections of text out loud! I was also surprised when I handed the book to my girlfriend, and she also remarked that the book applied to her as well.A quick note... For you to really use the material in this book, you must be willing to look into yourself and into your past. If your defense mechanisms are out in force (or if you don't realize that you even have defense mechanisms), then you will not be able to see what you have to do. (In fact, some of your defense mechnisms are there specifically to prevent access to the very content you need to get to.)
Trustpilot
Copyright © 2022 Thriftbooks.com Terms of Use | Privacy Policy | Do Not Sell My Personal Information | Cookie Preferences | Accessibility Statement
ThriftBooks® and the ThriftBooks® logo are registered trademarks of Thrift Books Global, LLC