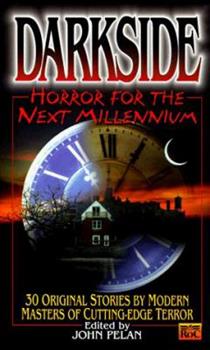 Darkside: Horror for the Next Millenium

(Book #1 in the Darkside Series)

by Edward Lee and Lucy Taylor

This description may be from another edition of this product. The best anthology editors inspire their writers to stretch their abilities, to pull their writing craft up another notch. It's evident from Darkside: Horror for the Next Millennium that John Pelan is...

Published by Thriftbooks.com User , 14 years ago
COuld've been better and stronger, but definitely worth reading. I wouldn't pay much for it, but if you can get it used grab it.

Thirty tales of horror ranging from creepy to downright gruesome!

Published by Thriftbooks.com User , 15 years ago
John Pelan does it again, putting together a great collection of modern-day horror masters, along with intriguingly ghoulish stories from some fresh names. If you are a fan of the short-story horror anthologies as I am, you won't want to miss this first edition of Pelan's 'Darkside' books. Table Of Contents: 'Skinwriters' by Robert J. Levy 'Ice Dreams' by Elizabeth Massie and Robert Petitt 'Wasting' by Lauren Fitzgerald 'Backseat Dreams & Nightmares' by K.K. Ormand 'The Stick Woman' by Edward Lee 'Soul Of The Beast Surrendered' by Wayne Edwards 'October Gethsemane' by Sean Doolittle 'Scars' by Lucy Taylor 'Ystrey orm' by Brian McNaughton 'Tears Seven Times Salt' by Caitlin R. Kiernan 'One-Eyed Jack' by S. Darnbrook Colson 'Elena' by Steve Rasnic Tem 'Family Album' by Adam-Troy Castro 'Having Eyes, See Ye Not?' By Sue Storm 'Sisters In Death' by D.F. Lewis 'Window Of Opportunity' by Roman Ranieri 'Envy' by Christa Faust 'The Man Of Her Dreams' by Alam M. Clark 'For The Curiosity Of Rats' by Jeffrey Osier 'The Stranger Who Sits Beside Me' by Yvonne Navarro 'In Pieces' by Deidra Cox 'Voices Lost & Clouded' by David B. Silva 'If Memory Serves' by Jack Ketchum 'The Tears Of Isis' by James S. Dorr 'Stick Around, It Gets Worse' by Brian Hodge 'Voices In The Black Night' Larry Tritten 'Stealing The Sisyphus' Stone by Roberta Lannes 'The Nightmare Network' by Thomas Ligotti 'Fiends By Torchlight' by Wayne Allen Sallee '... & Thou Hast Given Them Blood To Drink' by t. Winter Damon & Randy Chandler With such a line-up, I can only mention a few of my favorites. 'Skinwriters' is a haunting tale of a writer's success putting pen to milk-white flesh. 'Wasting' will give you a terrifying view of anorexia. 'The Stick Woman' showcases Edward Lee at his sickest, flaunting his uncanny fetish for amputations and poo. 'Soul Of The Beast Surrendered' brings you into contact with the strangest imaginary friends I've ever read about. 'Scars' calls upon a deadly evil lurking in a small African village. 'Ystery Orm' left a vicious chill settled in my spine after reading it: this is the place of a nightmare, strange buildings with unexplainable entrances containing nothing but empty, crawling dread. 'Tears Seven Times Salt' left me feeling damp, shivering with cold, fright, and mystery. 'Voices In The Black Night' is a tale of words captured from library books by a strange man. 'Darkside: Horror For The Next Millennium' is the first of Pelan's 'Darkside' collections. Be sure to pick up 'The Darker Side: Generations Of Horror', 'Walk On The Darkside: Visions Of Horror', and 'Lost On The Darkside: Voices From The Edge Of Horror' if you like this collection. Horror is back, creeping around your house at night, settling its poison to the bottom of your water glass, and howling at the moon as you turn restlessly in your sleep. Light a candle, pour a glass of wine as red as blood, and settle into your armchair for a full night's reading pleasure with a 'Dar

THE BEST ***NON-THEMED*** ANTHOLOGY OF THE DECADE!

Published by Thriftbooks.com User , 22 years ago
If you're looking for an anthology of short stories incorporating a singular theme, DARKSIDE: HORROR FOR THE NEXT MELLENIUM is not for you. Instead you might want to try one of the billions of vampire erotica --(yawn)-- anthologies out there. DARKSIDE hits horror from every angle. From the soul-chilling to the hardcore and all points between, DARKSIDE encompasses all that is horror--a multi-facted emotion, we all will agreee--and has the daring to publish it in one volume, with no Barker, Rice, King or Koontz reprint as an anchor. All new fiction. All new voices. All original to the author's repective visions, without limitation of carbon-copy-inducing theme. YES! This is the way it should be. THIS IS THE BEST *****NON-THEMED***** (yes, that's a key phrase, people) ANTHOLOGY OUT THERE. If you're lookinc for cliches, by all means, go grab that vampire erotica one. This is for horror enthusiasts, not the closed-minded, timid, or shallow.Kudos to John Pelan as editor, Darkside Press for the hardcover, and ROC for the mass-market edition. This should be a yearly effort, and a DARKSIDE II would be the only thing I would reccomend to the publisher.

Published by Thriftbooks.com User , 23 years ago
I disagree with many of the posts below. This anthology is about horror. Anyone who is unaware of the nature of horror stories should not be purchasing this book. With very few horror publications coming out these days, I was pleased to find a new anthology of fresh work and great premises. Lauren Fitzgerald's "Wasting" is one story that stands out in my mind. Her story is not merely a scary tale, it is a broad statement about society and our standards of perfection. Plainly stated, if you are not interested in reading horror, you won't like this book. If you are, you will not be disappointed.

One of the best horror anthologies to come along in years!

Published by Thriftbooks.com User , 23 years ago
This is one of the best horror collections I've read in years! These stories are fresh and well-written. No re-hashing of old tales. Not only does each story contain wonderfully horrific elements, it is thought-provoking and attention-grabbing as well. I can bet that we'll be seeing alot of these cropping up in a Year's Best anthology in 1999. A definite MUST read!
Copyright © 2020 Thriftbooks.com Terms of Use | Privacy Policy | Do Not Sell My Personal Information | Accessibility Statement
ThriftBooks® and the ThriftBooks® logo are registered trademarks of Thrift Books Global, LLC