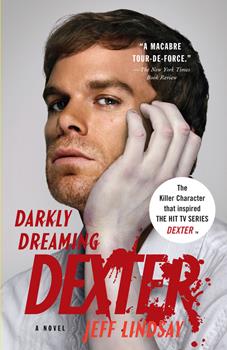 (Book #1 in the Dexter Series)

Meet Dexter Morgan, a polite wolf in sheep's clothing. He's handsome and charming, but something in his past has made him abide by a different set of rules. He's a serial killer whose one golden rule makes him immensely likeable: he only kills bad people. - The Killer Character That Inspired the Hit Showtime Series Dexter And his job as a blood splatter expert for the Miami police department puts him in the perfect position to identify his victims...

Published by Sunsess , 1 month ago
As someone who was an avid fan on the TV Series, and finds the overall concept of a "moral" serial killer quite fascinating, this book just didn't live up to to the hype. There were two reasons for this that I can think of. For one, Dexter's personality is laid on way too thick in the book. Every three sentences there's some quip about how he has no emotion and is tricking them all, and a good portion of them are repetitive. I did like how it was approached in the writing style it was just too frequent, too cringy, not organic enough. It felt like ...play. The second, and perhaps more important issue, is that this story failed to sufficiently intertwine Dexter's personal life with the murder and intrigue and capture the complex spiraling of all three. It felt largely like your standard crime novel. I wanted something deeper. An emotion-wrenching unreadable but must read murder mystery. But honestly, my emotions were not heavily invested at any point. I didn't know the characters enough. What I did know was from spottings at crime scenes and from a logical, emotionless perspective. Seeing the characters actually interact a bit more in a normal setting might have helped me care about them. This book is a weird case because I can honestly say I preferred the series. Very much so. I may read a couple more in this series just to see how the writing evolves but as for this book, it's a solid three cows.

Published by Diana , 8 months ago
The action is nonstop and Dexter is an average guy with an unusual background. Jeff Lindsay’s style of writing draws you in to feel the excitement of the chase and keeps you turning pages to find out what is going to happen next. If you enjoy psychological thrillers you won’t be disappointed.

An interesting trip with the dark passenger

Published by Rocket , 9 months ago
The characters are so multidimensional and wonderful and it has you on the edge of your seats.

Published by JFarnsley1897 , 3 years ago
This book is most definitely for people who like the dark and twisty stuff. I watched the Showtime show first, not knowing that it was based on a series of books. With that being said, the book REALLY grabbed my attention because it was (of course) more in-depth than the TV show. I recommend this book to anyone who like this type of dark humored book.

Published by Thriftbooks.com User , 15 years ago
This book swept me up in its darkly chilling tale of a likeable, witty and charming serial killer from page one. Well done to the author for managing to make me like a man whose crimes are repulsive in the extreme. Dexter Morgan, a seemingly normal young man, has a dark sense of humour coupled with a penchant for murdering `bad guys'. He analyses blood at crime scenes and has an abrupt but well-meaning policewoman sister who is not treated seriously by her colleagues. Dexter also has an uncanny knack for solving crimes committed by less scrupulous serial killers and his sister enlists him in helping her find the killer behind a recent spate of gruesome murders. The best thing about the book was feeling as if I really got inside the head of Dexter. He is unusual, sinister, funny and poetic. His description of his `Dark Passenger', the presence inside him that compells him to kill repeatedly, was strange and intriguing. Although some of the plot resolutions at the end of the book seemed a bit coincidental, they were still surprising and enjoyable. I also liked reading a crime novel set in Miami, which is a new setting for me. All in all, an original and unsettling debut novel from an author I'll definitely be watching out for in the future.

Published by Thriftbooks.com User , 16 years ago
Having spent a few years working in forensic psychology, all I can say is delightful well done job on Dexter. I don't know of one part where it rang false. I flew through the book simply because Dexter carried me through it. He didn't break the pattern one time.

Published by Thriftbooks.com User , 16 years ago
Dexter Morgan is the "Robin Hood" of the serial killing business, only slaughtering those who deserve it. His self-deprecating persona and inexhaustible wit make him extremely likeable. His lust for ritualistically killing human beings is channeled in the "right direction." He only preys on the scum of society, efficiently and sadistically murdering those who perpetrate heinous crimes. "Darkly Dreaming Dexter" is not for the squeamish, considering there is plenty of blood and gore. It is a highly unconventional novel since our hero enjoys mutilating and slicing human beings in his spare time. Yet one is inevitably ensnared by Dexter's humanity and sense of morality, despite his savage pastime. At the end of the day, Dexter turns out to be immensely likeable... "Darkly Dreaming Dexter" is a fast paced and intriguing novel. Amid all of the unoriginal and predictable books that are out there, Jeff Lindsay delivers a refreshing and highly original tale.

I will wait for the next one, impatiently. Is it ready yet?

Published by Thriftbooks.com User , 18 years ago
I loved this book and I will recommend it to several friends. Not everyone, though. I think it takes a certain "bent" to appreciate the protagonist, dreamy detached Dexter. If you acknowledge and sometimes embrace your dark side, give this book a try. The narrative style was jarring to me initially, but it made perfect sense later, and now I believe it was the only approach for this particular story. It's difficult to say more without spoiling. I feel all the characters were developed just enough; Mr. Lindsay didn't waste my time with gratuitous detail. The tension, suspense and drama build and build, and Mr. Lindsay milks the plot for all it's worth. There's a big revelation at the end, and I believe I saw it coming, though Lindsay was masterful in trying to distract me from it. He is relentless and I must say more than a little perverse keeping me guessing about some of the details well into the epilogue. (Well Done!) Darkly Dreaming Dexter is not a book for everyone. It brought up feelings in me similar to those I experienced when I read Will Self's "My Idea of Fun." It was like a really bad car wreck that compelled me to drive by and gawk, again and again. Mr. Lindsay, may I call you Jeff? Thanks for the fun, and when may we read the next Dexter novel?

Published by Thriftbooks.com User , 18 years ago
Jeff Lindsay's first novel is gruesome but fascinating in a Silence-of-the-Lambs sort of way (the narrator, who is trying to catch the serial killer, is himself a serial killer). Dexter is a blood-spatter technician with the Miami PD, a perfect job for someone who cuts live people up as a hobby, I suppose! Relative to Hannibal, Dexter is actually fairly likeable, and the reader finds him/herself strangely "on Dexter's side" as he simultaneously admires and tries to find the killer. Lindsay has a real knack for plotting; the book moves very swiftly. The end result is the best thriller in ages, and I'm sure we'll see more of Dexter in sequels very soon.
Trustpilot
Copyright © 2022 Thriftbooks.com Terms of Use | Privacy Policy | Do Not Sell or Share My Personal Information | Accessibility Statement
ThriftBooks® and the ThriftBooks® logo are registered trademarks of Thrift Books Global, LLC