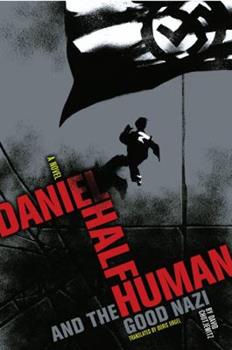 In 1933, best friends Daniel and Armin admire Hitler, but as anti- Semitism buoys Hitler to power, Daniel learns he is half Jewish, threatening the friendship even as life in their beloved Hamburg, Germany, is becoming nightmarish. Also details Daniel andArmin's reunion in 1945 in interspersed chapte

Published by Thriftbooks.com User , 16 years ago
Until the spring of 1933, Daniel has been lucky enough to enjoy a good German childhood with his well off and well educated family. Daniel has even enjoyed jail because one exciting night along with his best friend, Armin, they were caught painting a swastika on a wall in the hated Communist section of Hamburg. In their cell, the boys the boys swear lasting brotherhood but this camaraderie is soon threatened by a family secret for Daniel learns that his mother is in fact Jewish, that he is half-Jewish and therefore in the eyes of the Nazis who are rapidly rising to power in Germany, half-human. Daniel decides to keep the truth a secret and he Armin excitedly talk of joining the Hitler Youth. Armin's father forbids it as he is a Socialist but Armin joins anyway and the seeds of tragedy are planted for both boys who remain friends despite everything but eventually their friendship is overrun by the times they are living in and Daniel is forced to make a choice, stay in German surely die or leave with his parents to a safe haven outside of Europe. The story shows the rise and fall of Nazi Germany and the rise and fall of a friendship that is destined to come full circle, for with the fall of Nazi Germany and the allied invasion a young American solider (Daniel) is interviewing German soldiers who may or may not have been in the Nazi Party and among them is Armin and the young American solider has a choice, should he ignore what he knows to be the truth despite Armin's protests, that the Armin was a member of the Nazi party or let him go. This is a book about friendship and what we do in the name of our beliefs, well written, totally haunting, this is a book that both adults and children can read and enjoy. Sometimes we have to stand up and be counted no matter what the consequences.

Published by Thriftbooks.com User , 16 years ago
'Daniel Half Human: And the Good Nazi' by David Chotjewitz was good book, and it's very interesting. It is about a young teenager who lives in Germany named Daniel. He has always thought himself to be German, and supported Hitler's views, but when he founds out that his mother is a Jewess, his world changes. That means he is half-German, half-Aryan, half-human in the eyes of most. How will he cope, and how can he continue to live his life as before?

Daniel Half Human : And the Good Nazi

Published by Thriftbooks.com User , 17 years ago
I loved this book! The Nazi/WWII era is one I have always found interesting and have read many books about it. This is one of the best. It portrays the Nazis effect on Aryans, Jews, youth, poor, rich, and adults. The story is about Daniel, a regular teenage boy, who admires and wants to be a Nazi. All that changes when he learns he is Jewish. He is then faced with tough realizations and new appreciations. He goes from having many friends and a lot of money, to being on the run from the Nazis, having hardly any friends, with little money. However, his best friend Armin continues to be his friend but also continues his Nazi career. This book really makes you think and I definitely recommend it. If you are really interested in this time period, as I am, I also suggest you read: Until We Meet Again by Michael Korenblit and Kathleen Janger , The Pianist by Wladyslaw Szpilman, Schindler's List by Thomas Keneally, and Night by Eli Wiesel.

Award winner from the Association of Jewish Libraries!

Published by Thriftbooks.com User , 17 years ago
This title was named a 2004 Sydney Taylor Honor Book by the Association of Jewish Libraries. Daniel lives an ordinary, comfortable life in 1930's Germany. With the rise of Hitler, his mother's formerly insignificant Jewish identity (of which Daniel had not even known) becomes important, and Daniel finds himself designated a "mischling" (half-Jew). This complicates but does not end his friendship with Armin, a prominent member of Hitler Youth. The story is framed by "flash forwards" of Daniel as an Allied soldier in 1945 Germany, exploring the wreckage and the memories invoked by it. This keeps the story moving forward and provides Daniel with the context to make meaning of the events of his youth. The well-written (and clearly translated by Doris Orgel, author of The Devil in Vienna) story is compelling and realistic, emotionally stirring and psychologically believable. Characters are multifacted and well-rounded. The tale is told from multiple points of view, giving readers an inside perspective on the experiences of Hitlers victims AND followers. The book is a fascinating study of human relationships as well as of Holocaust history. It will provide a rich experience for mature readers, and would be an excellent choice for discussion groups.

Richie's Picks: DANIEL HALF HUMAN AND THE GOOD NAZI

Published by Thriftbooks.com User , 17 years ago
DANIEL HALF HUMAN AND THE GOOD NAZI by David Chotjewitz, translated by Doris Orgel, Simon & Schuster/Atheneum/Richard Jackson, October 2004, ISBN: 0-689-85747-0 "It's interesting: On the street you know right away who's Jewish. I don't mean the Orthodox with their hats and curled sideburns. I mean the ones in normal clothes. I recognize them by how they walk. The Jews always stay close to the building walls. Or near the gutter. Even though it isn't written anywhere that they should. And they always look down. As though they are looking for something on the ground. And there's always this embarrassed smile. As if they wanted to beg pardon for something. No Germans walk in that crept-inside-themselves way." --Daniel's cousin Miriam, writing a letter in 1935. Two young friends in Hamburg, Germany become blood brothers while spending a night in jail. They've been caught painting swastikas in the Communist sector of town in 1933, shortly before the rise of Adolf Hitler. Daniel, the son of a wealthy attorney, and Armin, a poor scholarship student, attend an elite high school together. Little do either know, as the pair are first dabbling in hatred and imagining belonging to the HJ (Hitler Youth), that Daniel's parents will soon reveal to him that his mother is actually Jewish. "Daniel looked at his father. 'Why did you do it?' he asked. 'Why did you marry a Jewess?' Rheinhard stared at him. 'Why I did what?' That's why I'm half Jewish now,' Daniel said. 'Because you married a Jewess.' Rheinhard didn't answer. He gave David a look that hurt more than the smack in the face he gave him next." Desperately trying to keep his horrible secret from everyone including Armin, Daniel is furious when his cousin Miriam shows up to live with them after her father (Daniel's mother's brother) is taken into custody. And although his father's honored position as a decorated German W.W.I veteran allows Daniel's tenuous continuation at school, Daniel slowly is forced to internalize the position in which he has found himself: "I'm the lowest. That's how I felt. Someone you don't even greet. A nothing. "And suddenly everything that I'd been keeping at a distance burst in on me: all the fear, all the shame, all the humiliation. I just stood there, on the sidewalk, in front of some store window as people walked by me. I stood in their way, got shoved, and a short man with a hat on said, 'Look out,' when it was he who should have looked out. "And in that moment I knew hatred. I followed my erstwhile teammates with my eyes, and I hated every one of them. I imagined running up to the bunch, grabbing Klaus, spinning him around, letting him have it--in the face with my fist. Till the blood gushed out. "But my hand didn't hurt him. Every blow I dealt him hurt him not at all, hurt only me. It hurt so much, I tried with all my might to obliterate this scene, erase it from my mind." It is ultimately Armin's attraction to Miriam that threate
Trustpilot
Copyright © 2022 Thriftbooks.com Terms of Use | Privacy Policy | Do Not Sell or Share My Personal Information | Accessibility Statement
ThriftBooks® and the ThriftBooks® logo are registered trademarks of Thrift Books Global, LLC