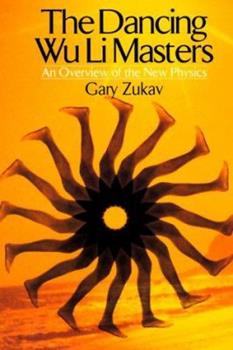 The Dancing Wu Li Masters: An Overview of the New Physics

This description may be from another edition of this product. "The most exciting intellectual adventure I've been on since reading Robert Pirsig's Zen and the Art of Motorcycle Maintenance."--Christopher Lehmann-Haupt, New York TimesGary Zukav's timeless,...

Published by Thriftbooks.com User , 14 years ago
What a pity the two responses to "The Dancing Wu Li Masters" chosen as "spotlight" reviews are both cynical and derogatory. I hope they don't deter others from reading further. Neither reviewer seemed to grasp the fact that Gary Zukav was not writing about physics: He was writing about mental mastery in the *context* of physics, going to great lengths to explain the implications of "Wu Li." The whole book, in fact, is based on five of the many representations of "Wu Li." Zukav even says in the introduction, "This is not a book about physics or eastern philosophies." All the same, Zukav checked his facts out with "five of the finest physicists in the world" and footnotes their comments where they "punctuate, illustrate, annotate and jab at everything in the text." What more can you want? Those physicists even allowed themselves to be named, surely professional suicide if Zukav is substantially incorrect - as some reviewers maintain. Zukav also warns the reader that knowledge in physics at the time of writing was set to progress rapidly. What was accepted then would soon be made redundant as more information arose. I feel really sorry for those who get no joy out of this book. I, for one, will go back to it again and again out of sheer delight. Zukav puts it this way: "Most people believe that physicists are explaining the world. Some physicists even believe that, but the Wu Li masters know they are only dancing with it." All I can say is that, with this book, I danced too.

Excellent Introduction to the New Physics

Published by Thriftbooks.com User , 21 years ago
This is one of the most accessible and most fascinating introductions to the new physics that I have ever read. I took a class in Thermodynamics and Modern Physics last summer at a local university and I did not learn a tenth as much as I did from this book. Granted I learned more mathematical details from the class, but this book taught me why what I was learning and doing made sense, which at least for me is far more important. I feel if I went back and took that class over again it would be extremely easy now.The other wonderful aspect of this book is its constant ties to Eastern Philosophy. This is something that seems to be becoming more and more prevalent in recent years in the sciences. The whole world is becoming more and more interdisciplinary and this book is a fine example of what cross-fertilization can do to inspire new ideas and concepts.I would highly reccomend this book for any one interested in science even if they are not interested in physics per se. This book provides and excellent analysis of how scientific ideas and conceptions change and incorporate new ideas and new experience. This book is also very relevant from the aspects of philosophy, history, and sociology of science as well since it delves into all three of these aspects at times. Overall an extremely enjoyable and accessible read.
Copyright © 2020 Thriftbooks.com Terms of Use | Privacy Policy | Do Not Sell My Personal Information | Accessibility Statement
ThriftBooks® and the ThriftBooks® logo are registered trademarks of Thrift Books Global, LLC