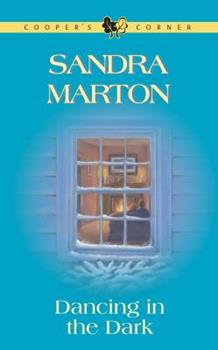 (Book #5 in the Cooper's Corner Series)

Welcome to Twin Oaks -- the new B and B in Cooper's Corner. Some come for pleasure, others for passion -- and one to set things straight.Wendy Monroe was an Olympic hopeful in skiing...and madly in love with Seth Castleman. But an accident shattered her skiing dreams -- and caused her to leave Seth rather than tell him the painful secret behind her injuries. Wendy has now returned to Cooper's Corner with a desire to mend her broken body and heart...

Published by Thriftbooks.com User , 18 years ago
DANCING IN THE DARK by Sandra Marton (Cooper's Corner)In DANCING IN THE DARK by Sandra Marton, an ex-Olympic skier returns to her hometown of Cooper's Corner after many years of living in Europe. She is back only to seek the help from a specialist who may help her regain the full use of her legs. Wendy Monroe was on her way to being an Olympic hopeful, representing the USA on the ski team. Unfortunately, bad luck hit when she had a major ski accident right before the Olympic games, and her dreams were over. Many years later, Wendy returns home to try to finagle a meeting with a specialist who had a new way of operating on those like her who have lost the use of their legs. She knows however that he is not taking on new patients, and the surgery itself is risky. Some patients end up losing the total use of their legs. Wendy CAN walk, but she wants to ski like a champion again, feeling that anything less means she is not complete. She is ashamed of her disability, and is tired of feeling that people look at her with pity. She wants to return to the independent young girl she used to be, refusing to accept that she is now handicapped.When Wendy left home to enter the Olympics, she had left behind the love of her life, Seth Castleman. Wendy and Seth had met when they were teenagers, fell in love, but Wendy was already on her way to entering the Olympics. Seth remained at home when she went to Europe for the Games. But, after her accident, she rebuked Seth's love and turned him away when he flew across the Atlantic to be by her side. It is now ten years later, and Seth still carries a torch for his long lost love, but both he and Wendy have moved on. DANCING IN THE DARK is yet another novel in the COOPER'S CORNER series and I enjoyed this one as well. Marton focuses on the personalities of the two lovers, and does a good job in writing a believable story. For those who love a good romance with a few psychological twists, I recommend this book.

Published by Thriftbooks.com User , 19 years ago
Sandra Marton's latest novel is the part of the continiuing Cooper's Corner line. This is the story of Wendy Monroe, Olympic skiing hopeful, and her lover, Seth Castleman, who seemed to have no hope of a good future when they were younger. Now, nine years later Wendy comes back to Cooper's Corner because famous orthopedic surgeon Rod Pommier is in town, and she wants him to agree to perform surgery on her leg, a surgery that is very risky.She doesn't tell Seth that she is back, and he gets the surprise of his life when he finds out. After the accident that had destroyed her leg, she sent Seth away when he flew out to Norway to be with her. She didn't want to see him because of a secret reason. Seth is very mad, but still very much in love with Wendy. He wants her to give them another chance, and as the story progresses we see what a loving man Seth is and how Wendy learns to trust him again. Both the hero and heroine are great characters, though Wendy's whining about her leg and her lack of accomplishments because she couldn't compete anymore did start to grate on my nerves. Seth was definitely one of a kind, a really great hero who helped Wendy to see that there were other things in life besides skiing. Dancing in the Dark is the story of their love and how they both had to accept that things had changed between them, while still being able to have a loving relationship. It was a great book, and I would definitely recommend it. Sandra Marton did a wonderful job with these characters.
Trustpilot
Copyright © 2022 Thriftbooks.com Terms of Use | Privacy Policy | Do Not Sell My Personal Information | Accessibility Statement
ThriftBooks® and the ThriftBooks® logo are registered trademarks of Thrift Books Global, LLC