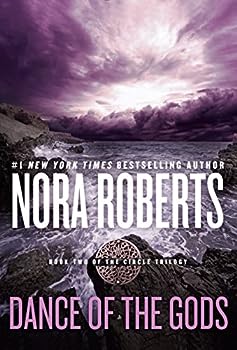 Dance of the Gods

(Book #2 in the Circle Trilogy Series)

Combining elements of the supernatural with gripping suspense and seduction, #1 New York Times bestselling author Nora Roberts presents the second novel in her Circle Trilogy... ? He saw where the earth was scorched, where it was trampled. He saw his own hoofprints left in the sodden earth when he'd galloped through the battle in the form of a horse. And he saw the woman who'd ridden him, slashing destruction with a flaming sword...? ? Blair Murphy...

Published by Gayle Morgan , 1 year ago
I ordered a hardback and you sent a paperback. No big deal you say. It is if you cannot read the small paperback print. Thank you so much. I spent over $70 on books so you could do whatever you wanted. So sorrrrry. Right. Thanks a lot.

Who knew she wrote more than Gooey Romance.

Published by Thriftbooks.com User , 14 years ago
This series was my first exposure to Nora Roberts, I have to admit I never gave her books a second look, why would I read a trashy romance novel. Well I found I had been painting her with a very prejudiced brush, what a mistake! This is a great fantasy series, and the romance there is is very fun and not over the top. I will definitely look for more fantasy books from Ms. Roberts.

wonderful book, especially if you enjoy fantasy and romance!

Published by Thriftbooks.com User , 14 years ago
I thoroughly enjoyed this book. It had the perfect mix of fantasy and romance. Blair is not your typical romance novel heroine. All of the main characters contribute to the story with their unique personalities and style. This is a great trilogy!

Dance of the Imagination...

Published by Thriftbooks.com User , 14 years ago
Not as superb as the first book of the triology, but still fabulous! The story had some lags and the romance between the two was just not as intense as that of Hoyt and Glenna, but still another smash hit filled with all awe! Fantasy and reality have a heavenly mix once again! A MUST READ TRILOGY!!

Danger and excitement increase as another couple of the Six bond.

Published by Thriftbooks.com User , 15 years ago
In this middle book of the Circle Trilogy, the Circle of Six (Hoyt, Cian, Glenna, Larkin, Moira and Blair) go on the offensive with some mixed results! The first book ended after Hoyt the sorcerer and Glenna the witch's handfasting that was interrupted by a battle with Lora -- lover/best friend of Lilith, queen of vampyres, and a try to save some "humans" captured from a nearby town. Now Larkin and Blair talk over the battle and how it was even beyond Blair's 13 years of demon hunting experience. Blair has been alone for those 13 years and since her mom left her dad and took her brother, she was under her dad's tutelage that was cold and harsh. Blair did try to become engaged a few years ago to a stockbroker named Jeremy. However, once she told and "showed" him what she really did, Jeremy was disgusted and revolted and left her. Blair enjoys the "hunky" Larkin's company and that of the others in the Circle but knows she will always be alone. Larkin of Geall on the other hand was raised in a warm and loving family. His father was brother to the recently deceased queen and uncle to Moira of the Six who should be the next queen. Larkin is also a naturally charming and flirty type of guy so as he puts the "moves" on Blair, she takes it as a lust type of thing as anything else is beyond her understanding and experience. In this middle book while the battles ramp up and the scenery and battleground changes to another world, the romance is very slow moving between Larkin and Blair. I felt more Larkin's love and tenderness and passion for Blair and less of Blair's feelings for Larkin as I felt they were a bit underdeveloped in the whole scheme of things. Blair seemed a little too "in love" with Larking's shape shifting and some of the creataures he became and less in love with the man he is. Overall an exciting and action-packed middle book that you have to read through in one sitting!!
Copyright © 2020 Thriftbooks.com Terms of Use | Privacy Policy | Do Not Sell My Personal Information | Accessibility Statement
ThriftBooks® and the ThriftBooks® logo are registered trademarks of Thrift Books Global, LLC