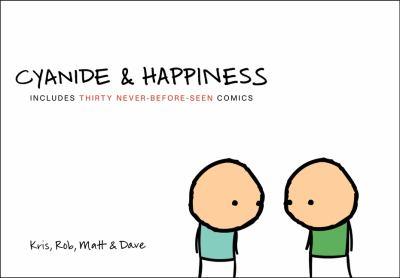 (Book #1 in the Cyanide and Happiness Series)

Cyanide and Happiness is the first-ever collection of the #1 comic on the Web. With 30 never-before-seen comics and appearances from fan-favorite characters like Seizure Man, SuperJerk, Captain Obvious, Prostate Man, and Obese Maurice, Cyanide and Happiness is a must-own for fans of the irreverent, hilarious cult comic from Explosm.net. In the best, sickest tradition of such cult favorites as The Book of Bunny Suicides and Should You Be Laughing at...

A Taste of Happiness...and Cyanide

Published by Thriftbooks.com User , 12 years ago
The book was hilarious, and contained some comics that you can't find on their website. I couldn't put it down until I was finished with it.

Kris Wilson Ate Every One Of My Children

Published by Thriftbooks.com User , 12 years ago
The creator of Cyanide and Happiness is a filthy sock puppet who destroyed my womb. Five out of five stars.

Published by Thriftbooks.com User , 12 years ago
Been a long time C & H fan, and this book doesn't disappoint, it has all their classics and really good ones, the only ones that aren't in here that I would have liked to see in here are the Purple Shirted Eye Stabber comics, but the ones in here make up for it, and the 30 new ones are awesomely funny, recommended for any fan or newcomer.

Funny book, as you would expect from these guys :)

Published by Thriftbooks.com User , 12 years ago
I've been a fan of [...] for a couple years now. When this book came to US stores, didn't even think about it. Just bought it. I have to say it was worth every penny. It's a really nice collection of their best, funnier comics and some extra book-exclusive comics too. I loved them all :P Only thing I didn't like is that I had to wait a couple months for it, since it was released in the UK first. And that US doesn't get a hardback edition. Just the paper back one. The paper back isn't bad, it's actually quite resistant, but hardback would have been a plus and I would have paid the extra couple of bucks for it. Anyways, great book. Highly recommended if you are fan of [...], if you are not, go to their webpage first, since not everyone likes their comedy (can be offensive). I LOVE IT.

It's just like the web comic, except you can touch it!

Published by Thriftbooks.com User , 12 years ago
This book is a collection of strips from the Cyanide & Happiness web comic at explosm dot net. Of course, being a collection, it should be just as good as the original, right? Well it's BETTER! For some reason they included 30 strips I'd never seen before. Also, the colors are more vivid in the book than they are on my computer monitor. It's very aesthetically pleasing. They have also included a funny "About the authors" section in the back of the book, with pictures of the authors rendered in their Cyanide & Happiness art styles. Did i mention it is HILARIOUS???
Trustpilot
Copyright © 2022 Thriftbooks.com Terms of Use | Privacy Policy | Do Not Sell or Share My Personal Information | Accessibility Statement
ThriftBooks® and the ThriftBooks® logo are registered trademarks of Thrift Books Global, LLC