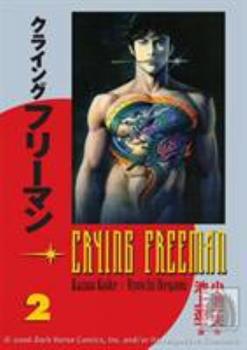 Crying Freeman, the deadliest assassin of the 108 Dragons clan of the Chinese mafia has taken a bride, and she has passed the harsh tests of the Dragons and been given a new name, Fu Ching Lan, "Tiger Orchid." And despite Freeman's Japanese heritage, he has been chosen to become the eventual leader of the Dragons. But someone inside the Dragons wants Freeman dead, and Tiger Orchid should make a fine hostage to draw Freeman into the open... where a...

Published by Thriftbooks.com User , 14 years ago
Yaay! The second installment is here! Yo gets his girl but theres a few barriers to be overcome, namely the eradication of both their pasts and embracing their new identities.Eno is now Fu Ching Lan, the beautiful "Tiger Orchid." They are welcomed into the powerful 108 Dragons, the chinese mafia! And Yo, now Long Tai Yang " Sun Dragon" is set to become their next leader. But as usual some people are not best pleased with this, and theres murders, kidnapping, and violence aplenty! Hurrah! Can Freeman save his precious Tiger Orchid? Once again Koike has created a brilliant crime manga, with stunning artwork. The cityscapes of Hong Kong are breathtaking! All the tattooing is fab! Freeman is buffer than ever, and hes going to have to be. to face off against the monstrous Bai Ya Shan. Shes big. Really big. And really jealous!! Really scary! Oh and theres plenty of creative crimal techniques in this, watch for the electroshock body suit. Amazing as ever! With some memorable characters! Great to be read over and over, plus its another hefty tome...cant wait for the next ones!

a new hero for the millenium

Published by Thriftbooks.com User , 22 years ago
As the razor sharp distinction between what is good and what is evil blurs the closer we get to y2k, a new type of hero has emerged from Japan who is not James Bond or John Wayne.Crying Freeman is an assassin, an anti-hero, but he is so good at what he does that the reader is rooting for him to win in the end.He is, after all killing others of his own kind.The story captures the imagination because it is realistic and the key ingredients are very similar to a book written by Jack Trevanian called "Shibumi".In that book, an assassin named Nicholas Hel dispatches his targets with an obscure martial art that could only be translated as "naked kill". He is also very well versed in the art of seduction. I wonder if the author of Crying Freeman ever read that book? Shibumi is a Japanese word to describe the art of "effortless perfection", a quality amply displayed throughout the manga.In any case, if you're bored with the clean-cut goodygoody heroes of the past and are looking for something grittier, then Crying Freeman is for you.

The art was beautiful... couldn't say the same for the story

Published by Thriftbooks.com User , 23 years ago
Like most people who couldn't read Japanese, I got the English translation of Crying Freeman. The first book of the series, Portrait of a Killer was promising in that the story was sort of believable. A Taste of Revenge follows up on two minor characters from the first book. Being the enemies of Freeman, both Kimie Hanada and Det. Nitta wanted revenge. How the story finally turned out was a surprise. Mixed into the revenge story was a plot of a certain cult to take over Japan. Compared to Portrait of a Killer, this story was mildly preposterous. As usual, the hero was practically invincible, and sexy. And I'll leave it at that. The artwork was beautiful as usual.

Published by Thriftbooks.com User , 23 years ago
Ryoichi Ikegami, a Japanese Gekiga illustrator known his fluent and sexy paintings. Men and women he paints are beautiful, realistic and sexy. I love them! A young and promising Japanese ceramist is kidnapped by HongKong mafia and made up to be an assassin. After the long and tough training, he becomes an expert assassin and the leader of the family. Once he was seen his killing by a Japanese woman and try to kill her, but they fall in love and get married. This story is about the adventure of violence and love. Sometimes Ikegami's works go too far to the extent of losing its realism, but in this series, well maintained.
Copyright © 2020 Thriftbooks.com Terms of Use | Privacy Policy | Do Not Sell My Personal Information | Accessibility Statement
ThriftBooks® and the ThriftBooks® logo are registered trademarks of Thrift Books Global, LLC