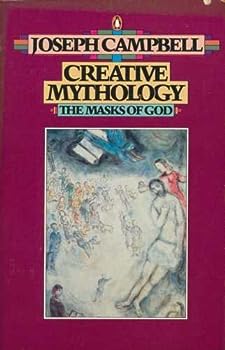 (Book #4 in the The Masks of God Series)

This volume explores the whole inner story of modern culture since the Dark Ages, treating modernman's unique position as the creator of his own mythology. This description may be from another edition of this product.

Remarkable synthesis of Research and Ideas

Published by Thriftbooks.com User , 18 years ago
Joseph Campbell's monumental "MASK" series aims to cover the subject of myth from its earliest inklings to its development into modern religions. It is remarkable how much privitive mythology remains with us today in our culture. Joseph Campbell offers several provocative interpretations of the origins of many of our cultural ideas, how primitive man viewed nature and what his blossoming awareness of the world both within and without grew. The universal belief system is formed from our evolutionary psychology much as the three instinctual fears of modern people (fear of dark, fear of snakes, fear of heights) were formed by our biological evolution, from the time when proto-humans dwelt in trees. Campbell offers a look at how many cultures today exhibit the same reverence and point of view toward mythology that primitive mankind did and how many of these remain. One considers such "beliefs" as animism (found in Native American and African tribes), people with a pipeline to the divine (witness the shaman, priest, witch doctor), the belief in luck, the "evil eye", "Father sun", "Mother moon". Indeed, according to Joseph Campbell, fertility in both people and plants played an important role in the development of such myths.Much of the suppostion on the part of the author involves the substance of divinity and how we communicate with it/her/him. The scholarship and research involved in this trilogy is simply astounding. A mandatory read for anyone seriously interested in the birth of our deepest ideas.

Published by Thriftbooks.com User , 22 years ago
The master of Comparative Mythology delves into the themes, that underlie the art, beliefs and literature of the Western Soul. The third volume explains why the Western culture is so much different from the Eastern Way.It enables the reader to step back and review his/her own culture from a more objective point of view. In the West, it is about the monotheistic belief, about God and Man as a seperate being. Therefore occidental myths establishes a means of relationship between God to Man and vice versa. He also shows up, why Christianism, Judaism and Islam are so similar and the fight over the "true God" is so ridiculous.If you haven't read the first two volumes "Primitive Mythology" and "Oriental Mythology", go for them first!

Published by Thriftbooks.com User , 22 years ago
This last volume of the Masks of God is a huge book that spans the efforts of artists to interpret the myths from early troubadour poems to Finnegan's Wake. Just for the books it added to my reading list, this book was valuable.The idea of the book that has stayed with me the most since I read it is the idea that an artist neither accepts myth as historical fact, nor rejects it as useless, but moves somewhere between those two extreme poles to mine its history.The book is dense, and not always easy to read. It took me a long time to pick through it-- particularly in sections with pages of quotations-- but it was ultimately quite rewarding. Being only an amateur student of religion and mythology, I am ill-equipped to judge the merits of its scholarship.

Published by Thriftbooks.com User , 23 years ago
After more than a decade of reading and pondering, I have finally finished Campbell's great populist tetralogy on the history, manifestations and uses of the world's myths, both as aids to spirituality and as a tools of power politics. No doubt, I could have read it faster, but my wont was to read a section, then contemplate, often taking side-trips into other texts, either to check out the original, or to catch another perspective, or to read other works by Campbell. (I was reading volume one, for example, when I became aware of the PBS series of conversations between Bill Moyers and Campbell, so I took side-trips into the companion volume to that, into Hero with a Thousand Faces and into Bruno Bettelheim's The Uses of Enchantment. Volume two somehow got me into Campbell's Mythic Image, a very satisfying consideration of mythic representations in art, and into Robert Bly's Iron John.) This volume deals mainly with the mythology of individuation, and with the history of the movement from tribal/sociological mythogenesis to the concept of the individual as his/her own "all in All" interpreter who uses the past as guide, but not as a monolithic revelation or absolutist decree, necessarily. I was most fascinated by the discussions of artistic creation in terms of mythogenesis, moving from the personal and religious letters of Heloise and Abelard, through the Parsival and Grail legends which became art (via Mallory and Wagner, most notably, whose works were both discussed extensively and well, to my delight [and also to my regret that my fellow lover-of-all-things-Arthurian, Andy Raiford, is no longer alive to share my joy in these passages], and on to the contemporary works of James Joyce [all his work] and of Thomas Mann [Magic Mountain, primarily]). There is lots more by Campbell that I want to read, and rooms-full of texts that these volumes have lead me to want to read, ponder, and investigate. It's a good life that has brought me into contact with all that is here, so that I may "participate joyfully in the sorrows of life" to quote a Hindu proverb used as a focal point in another of Campbell's works. Of course, I dog-eared a number of pages and underlined many quotable passages in this volume, just as in the rest of the tetralogy.
Trustpilot
Copyright © 2022 Thriftbooks.com Terms of Use | Privacy Policy | Do Not Sell My Personal Information | Accessibility Statement
ThriftBooks® and the ThriftBooks® logo are registered trademarks of Thrift Books Global, LLC