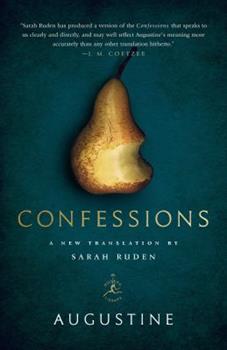 One of the great works of Western literature, from perhaps the most important thinker of Christian antiquity, in a revolutionary new translation by one of today's leading classicists Sarah Ruden's fresh, dynamic translation of Confessions brings us closer to Augustine's intent than any previous version. It puts a glaring spotlight on the life of one individual to show how all lives have meaning that is universal and eternal. In this intensely personal...

Published by Thriftbooks.com User , 12 years ago
This is great Lenten Reading, and just good reading in general. What I have read and understood I wished I had read this book earlier in my life.

Published by Thriftbooks.com User , 15 years ago
For those of you who thought that St. Augustine was going to be so deeply intellectual that it couldn't possibly apply to you, you should try this small book. It's not difficult reading, but the ideas aren't little ones. I was amazed at the parallels in culture to our 'modern' age, and at how little has changed in nearly 2000 years. He writes pretty bluntly about his youthful vices, which made me examine my own. I bought ten copies for friends and for graduation gifts this year.

Published by Thriftbooks.com User , 15 years ago
This Christian classic has touched me deeply. I read it the first time right after college, but recently picked it up again (thirty years later). I didn't remember a thing from the first reading.... I've been a Christian for many years, but find that this book is so fresh, with insights that are truly amazing. For this new read, I bought two different translations so that I could read both and compare when the meaning seemed obscure. I highly recommend the translation by Maria Boulding. It does a great job of staying true to his meaning, while expressing things in a way that speaks to the modern mind.

Published by Thriftbooks.com User , 20 years ago
I recently reread "The Confessions of St. Augustine" after many years and am glad that I did. This book, which is often called the first autobiography, is really not an autobiography in the sense that we use the term. It is Augustine's Confession to God, from which we glean many details about Augustine's life.In this we learn of Augustine's family, his early life, his search for truth and, throughout the book, his teachings on theology. Here we see him move to the gradually larger world, from Tagaste, to Carthage, to Rome, to Milan, where he finally finds Truth. He is then ready to return to his native Africa, his preparation completed for the work which would make him one of the greatest, Christian theologians of all time.In much of the early book, Augustine tells us of his rejections of God's call. Seeking truth and honors, he searched through many sources and sought out many teachers. He sought wisdom from pagan and Manichean philosophers. His disappointment with the highly touted Manichean bishop, Faustus, whose speech was pleasing but whose answers failed to soothe Augustine's soul, caused him to turn to Catholicism.Learning from the respected bishop, Ambrose, Augustine came to recognize the truth of Christianity, but his slavery to a non-Christian life style long prevented him from following the call of God. This persisted until one day he heard the child's song "Tolle Lege, Tolle, Lege" (the title of my high school newspaper), "Take it and read." Taking this as a divine command to read the first passage of scripture to meet his eyes, he opened the book to the passage, "Not in rioting and drunkenness, not in chambering and wantonness, not in strife and envying: but put ye on the Lord Jesus Christ, and make not provision for the flesh in concupiscence." Needing to read no further, his conversion occurred and he was ready for the great work which lay before him.Throughout much of the book, we are treated to Augustine's teachings on a variety of religious topics. We obtain his guidance on the nature of God, God's relationship with and expectations of man, as well as norms for the interpretation of scripture. This is the book for anyone with an interest in Christian theology or St. Augustine personally. Tolle Lege!

Published by Thriftbooks.com User , 22 years ago
In reading the few reviews of people who did not like this book, it seems that it is the genre more than the book itself which they don't care for. Is this book redundant, as one reviewer accused it of being? Most assuredly so, but that should hardly be a surprise in a text such as this which explores the inklings of a powerful intellect that is attempting to grapple with the "big" questions.Augustine writes with a brutal honesty about himself & his weaknesses of which most of us, I would wager, would be incapable of duplicating. The book is filled with theological speculations and a sense of deep-seated guilt that Augustine feels because of his sins. Some of the passages regarding faith might seem a bit ad-hoc to the modern reader, but I suppose there is no way around that.This is a good book, but it is not a book for everyone. I would recommend it if you have an interest in philosophy, religion, or the philosophy of religion. I would admonish those who do not have an enthusiasm for these three areas not to read this book.
Trustpilot
Copyright © 2022 Thriftbooks.com Terms of Use | Privacy Policy | Do Not Sell or Share My Personal Information | Accessibility Statement
ThriftBooks® and the ThriftBooks® logo are registered trademarks of Thrift Books Global, LLC