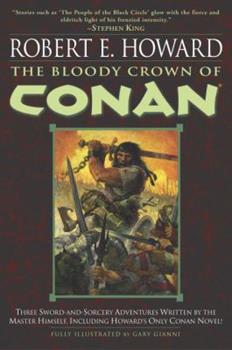 The Bloody Crown of Conan

In his hugely influential and tempestuous career, Robert E. Howard created the genre that came to be known as sword and sorcery--and brought to life one of fantasy's boldest and most enduring figures: Conan the Cimmerian--reaver, slayer, barbarian, king. "Stories such as 'The People of the Black Circle' glow with the fierce and eldritch light of [Howard's] frenzied intensity."--Stephen King This lavishly illustrated volume gathers together three of...

Published by Thriftbooks.com User , 16 years ago
"The Bloody Crown of Conan" is the second collection of Robert E. Howard's classic character published by DelRey. It contains three stories, including the only Conan novel "The Hour of the Dragon", as well as the novella "The People of the Black Circle", and the shorter "A Witch Shall be Born." While I'm not sure if any of these rank highly as personal favorites, they are all entertaining, rousing, and even chilling. Because there are only three stories, it's relatively easy to critique each story, as opposed to the first collection. Naturally, "Hour of the Dragon" is the centerpiece of this collection: nearly 200 glorious pages of intrigue, fantasy, horror, and war. Conan, king of Aquilonia, finds himself unseated from his thrown when a group of plotters, led by Valerius, a Aquilonian duke, resurrect Xalotun, a long-dead wizard, who uses his powers to defeat Conan. Taken prisoner, Conan escapes, and sets upon a quest for a magic amulet with the power to destroy Xalotun. Through the course of this episodic novel, Conan encounters evil in various forms, especially in the dark land of Stygia, where he meets giant snakes, vampire women, and evil priests. Through this, he comes to understand the importance of his tenure as king to the people of Aquilonia, as they are subject to tyranny by the gang of usurpers. Indeed, "The Hour of the Dragon" represents an interesting level of growth in the character. Even though Howard did not write these stories with any sort of chronology, he have taken into consideration how the character would have changed throughout his life. Stories that take place early in Conan's life reveal a basic callowness. He's a thief and adventurer, essentially thumbing his nose at so-called civilization. However, by the time of "The Hour of the Dragon", a more mature Conan has emerged, one who acts in the interests of justice and altruism as much as in his own self-aggrandizement. Don't worry, the young Conan is present in the other two pieces, particularly in the creepy "The People of the Black Circle." Here, Howard tells the story of Conan in his free-booting days. After the death of the king of Vendhya by black magic, his sister Yasmina ascends the throne. However, she soon finds herself under the power of Conan, whose bandits have been plaguing the kingdom. Initially seeking to ransom the queen, Conan instead finds himself in an uneasy alliance with Yasmina when the evil sorcerers who murdered her brother seek to kill her as well. A slightly more mature Conan is present in "A Witch Shall Be Born". The story itself is pretty basic, as another queen, Taramis of Khauran, is replaced by her evil twin sister, Salome, a witch. The real centerpiece of this story is the crucifixion of Conan (here, the captain of Tarmis' guards) by Salome's ally Constantius. Naturally, Conan survives the grisly death (although he at one point rips out a vulture's throat with his teeth), and he raises an army of bandits, while in

Three of the Best

Published by Thriftbooks.com User , 16 years ago
The second volume of Del Rey's definative collection of Robert E. Howard's Conan stories contains three of the best ones, The People of the Black Circle, The Hour of the Dragon, and A Witch Shall Be Born. The People of the Black Circle: Its obvious early on that Howard was really starting to hit his stride with the character by the time he wrote this . It was, at the time, the longest Conan story he ever wrote, and contains multiple plotlines which converge. It also contains some great black humor which would be right at home in today's cinema. My favorite line is, "I think I'll have your heart, Kerim Shah!", at which point the evil wizard telekenetically rips the heart out from the victim's chest. This is basically an oriental adventure story. The geographical names are changed just enough so that the reader will immediately identify with its historical counterpart. India is Vendya, etc. Many people consider this the finest Conan story that REH ever wrote. While its not my personal favorite, its definately in the top five. The Hour of the Dragon: The only full length Conan novel that Howard ever wrote. Yes, while its true that certain plot elements are derivative of earlier Conan stories (particarly "The Scarlet Citadel" and "Black Colossus"), this is nevertheless a remarkable achievement, and one of the best fantasy adventure novels of all time. Chronologically, its the last Conan story in the saga. Here we have a Conan that is less reckless, and more mature and responsible than his younger counterpart. After he loses his kingdom, he's driven to regain it, not for personal wealth and glory, but to bring justice back to the land on behalf of his subjects. King Conan is depicted as a wise and just ruler craves peace and prosperity, rather than war and conquest, for his kingdom. As its noted in the essay inside the book, whoever renamed this "Conan the Conqueror" missed the point entirely. Don't be fooled though. There's plenty of slaying for even the most die-hard REH fanatic. Let's just say that Conan doesn't kill anyone who doesn't have it coming to them. A Witch Shall Be Born: Basically, the story itself is pretty forgettable. What makes this story stand out is the one scene that everyone remembers, which is Conan being crucified (this scene was depicted on film very faithfully in the first Conan movie). Was Howard, perhaps on a subconsious level, expressing his views on Christianity? Its an interesting thought. Conan, even after being crucified, is not one to "turn the other cheek". As you'll see, he remains defiant even in the face of certain defeat. I can't wait for the third and final volume to come out, "The Conquering Sword of Conan".

Published by Thriftbooks.com User , 16 years ago
I've read practically everything that Robert E. Howard has ever written, from Conan, Kull, Kane, and Bran Mak Morn to Kirby O'Donnell, El Borak, Sailor Steve Costigan, Pike Bearfield and most of his other weird menace, horror, boxing, and adventure stories in the middle. But I never tire of reading them again, especially when they are in handsome, lavishly illustrated editions such as the Bloody Crown of Conan. The book contains only three Conan stories but they are among the longest and best. "A Witch Shall Be Born" written in 1934 contains among the most powerful images in all of Conan Lore as Conan is crucified in the desert and left to the pickings of the vultures. It is among the most vivid testaments to his strength and fortitude to have survived where any other man would perish. "The Hour of the Dragon" was Howard's longest Conan tale and the only true Conan novel that REH ever wrote. Having just become King of Aquilonia, intrigue from neighboring Nemedia where the exiled Valerius had fled, results in the ressurection of one of Acheron's most powerful wizards Xaltotun, dead for some 3,000 years. Conan is deposed from the throne and tossed into the dungeons to rot but is saved by a salve named Zenobia, who Conan would later re-pay by making her his wife and Queen. Conan then goes on a quest to find the Heart of Ahriman, the one item that can destroy the wizard. A truly epic Conan story and one where he must admit that his sword cannot win the day without help. Some make undue comparisons to Tolkien but Hour of the Dragon was written LONG before Lord of the Rings and there's no evidence that Howard was even aware of Tolkien. The last story is another Classic, The People of the Black Circle. the plot involves a group of wizards on Mount Yimsha who kidnap the Devi Yasmina to their mountain stronghold. Conan must join up with another ruffian and rescue her. While all the characters are remarkably multifaceted, I particularly liked Khemsa, a novice wizard who is talked into rising above his station (and defying his masters) by his beautiful, scheming girlfriend. Best of all these tales are not the edited versions you may have read in the old Ace and Berkely paperbacks, but pure, unedited Howard. Great stuff!

See the unedited versions for the first time..

Published by Thriftbooks.com User , 16 years ago
I was unaware that an editing process took place with the books. I always believed that the stories were always printed in their original form. This wasn't the case. If you are a Conan and Robert E. Howard fan; these are the best editions ever. I only wish there were more beautiful chapter illustrations. They really add a quality to the book that otherwise wouldn't have been there. If you want to see a good movie about the real Robert E. Howard I'd get "The Whole Wide World" ...it has lots of insight as to the type of person he was...

Published by Thriftbooks.com User , 16 years ago
"The People of the Black Circle". Due to Himelians' black sorcery King Bhunda Chand of Vendhya dies. His grieving sister who had to kill her sibling to give him peace wants revenge. None of her warriors want to deal with the evil seers except for Conan who fears nothing, neither sword or sorcery. "The Hour of the Dragon". Defrocked priest Orastes brings back to life High Priest Xaltotuan, who died three thousand years ago to teach him how to use the Heart of Ahriman. They plan to kill the ruling family of Nemedia through "natural" means, place an ally on the throne, and attack Aquilonia ruled by barbaric King Conan. "A Witch Shall be Born". Beloved Queen Taramis of Khauran is stunned when her twin sister Salome visits. Salome was left to die in the desert at birth, but being born a witch she survived. Salome impersonates her sister and uses mercenaries to take over. Conan survives warwounds, an attack by a vulture, and a tying to a cross to lead the counter insurgency. Miscellanea and Appendices. These segments include intriguing manuscripts and story synopsis by Robert E. Howard that show the development of Conan as a character and much of his age. The appendices further provide insight into the hero, the kingdoms, and his age. The well written stories by Mr. Howard bring out the best of Conan in an era of sword and sorcery and by themselves would make an ideal gift for aficionados. The miscellanea adds icing to an already delightful collection. Making this a winner for anyone who follows the Barbarian especially the opportunity to read what his originator scribed. Harriet Klausner
Copyright © 2020 Thriftbooks.com Terms of Use | Privacy Policy | Do Not Sell My Personal Information | Accessibility Statement
ThriftBooks® and the ThriftBooks® logo are registered trademarks of Thrift Books Global, LLC