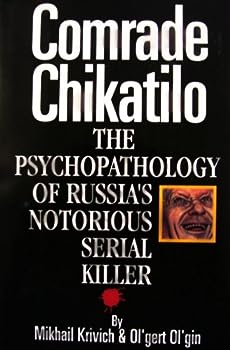 by Mikhail Krivich and O.M. Olgin

Reveals the inside story of the grotesque career, investigation, and trial of the Russian serial killer who murdered, mutilated, and cannibalized at least fifty-two people. 35,000 first printing.... This description may be from another edition of this product.

Detailed account of one of history's most frightening serial killers

Published by Thriftbooks.com User , 13 years ago
Like every other reviewer has said, this is a book not for the faint of heart or anyone with a weak stomach. This book is gruesome. The first chapter alone made me put this down for a month, it was so disturbing. Aside from the truly awful passages describing what Chikatilo did to his victims, this is also a story about how the Russian government repeatedly fouled up the investigation into the serial killer. There were too many incidents where Chikatilo ought to have been caught; instead, the police narrowly focused on other potential offenders, completely missing what was under their noses, either through incompetence or political pressure. Chikatilo himself is an odd man to get a grip on. He managed to maintain a semblence of normality with his wife and children, yet he was clearly very disturbed with dubious mental health. Much has been made of the evidence that he suffered from a sort of birth defect (in pictures, you can't help but notice the extremely flat back of his head) that may have contributed to his ability to disassociate himself from the horror of what he did to his victims. A small section of photographs is dedicated to pictures of his victims (while they were alive), one of the scene where a victim was found, the parents of the murdered children and the train station where Chikatilo picked up many of children he killed. There are also a couple of goosebump-raising images of the killer himself showing policemen the positioning of his victims using a dummy. I'm a fan of true crime books, especially the ones that are fortunate enough to have the killer alive and willing to be studied. Chikatilo showed a remarkable willingness to talk extensively about his crimes. The book finishes with the bizarre courtroom drama of Chikatilo's trial, where he was actually caged and put on a show of incomprehensible ravings that brought into question his mental state and competence to stand trial. In our American justice system, someone like Chikatilo would most likely have not been competent to stand trial and would likely have been shipped off to a mental health facility to await the continuation of his trial. Russian law is less nuanced than ours, and the judge allowed the trial to continue until the ultimate verdict which is likely to be appealed. At the time, Boris Yeltsin was still in power and unlikely to grant any sort of appeal. With Medvedev as President now, with the rumored influence of former President Putin, it's probably even less likely that any appeal will be granted. While not as graphically disturbing as this book, for fans of this genre I recommend the story of Richard Kuklinsky, The Ice Man: Confessions of a Mafia Contract Killer

Published by Thriftbooks.com User , 16 years ago
This is no doubt one of the best true crime books ever. It delves deep into the mind of Andrei Chikatilo and gives us information about why he did it, if there ever is a reason to do these horrible crimes. Worst of all is that if the police hadn't been so inadequate, Chikatilo would have been in jail after his first kill. They were so sure that Kravchenko, a man who lived in Chikatilo's street, was guilty of the murder. Chikatilo went on to kill 52 more people. The search for this serial killer was almost impossible, because the police didn't receive support from the Communist Party, who denied that there was such a thing as a serial killer in Russia. That only happened in America. As others have said, this is not for the weak hearted. It is graphic and uncensored, and you will be shocked. I know I was.

Published by Thriftbooks.com User , 18 years ago
In November 1990, Russian police finally arrested the man they believed to have been behind the brutal killings and mutilations of several children and young men and women ranging from age 9 to early twenties. The man was Andrei Romanovich Chikatilo, a Ukraine-born supply clerk in his mid-fifties, who lured his victims with promises of a nice meal at his dacha in the woods, assaulted, stabbed his victims with knives multiple times, poked their eyes out, and calmly disposed of the body. Under questioning, he admitted to 53 murders, which could've been up to 70. This book traces Chikatilo's life, his reign of terror (1978-1990), and why he evaded captured for twelve years.Having been born during the man-created famine of the Stalinist USSR, and having witnessed the kidnapping of his older brother Stepan, who was eaten by starving peasants, and thus made to stay inside the house for fear of suffering the same fate, it's no wonder that Chikatilo grew up with a damaged psyche. His impotence and premature ejaculation no doubt led to further humility, humility that wouldn't have boiled into a rage of unfulfillment and thence to horrific murder, had medically curing impotency been legal in the Soviet Union. Indeed it was lucky enough that he and his wife bore two children, and that his wife was a modest, patient, and understanding woman. Alas, that wasn't enough, it seems.The book also examines the flaws inherent in the Soviet police system. People suspected of a crime on circumstantial evidence, yet having an airtight alibi can be made to confess. This happened to Aleksandr Kravchenko, an ex-con who committed rape and murder but was under 18 so served his time, had seen the error of his ways and was now a good citizen. Unfortunately, he lived on the same street as Chikatilo, his house was also near the river where Chikatilo's first victim was, and his wife, brought in on trumped-up charges of stealing, was forced to change her testimony regarding her husband's whereabouts. Further, Kravchenko was beaten up in prison and threatened with rape by a decoy used to elicit confessions, and confessed to a crime he never committed, for which he was executed.Another example is the immunity given to Party members from crimes. Party membership was quite a mark of status in the Soviet Union. And the emphasis of scientific evidence, then dated, worked for Chikatilo. The police was looking for someone of blood type AB, and due to a medical anomaly, Chikatilo's blood was A, with the B antigen more prominent in his hair and saliva--hence the evidence was enough to drop any murder charges against him. One police captain might have been credited with his capture, but he acted more on intuition and common sense (his seeing Chikatilo's behaviour at the train station and panic when asked to produce his documents), and that unfortunately isn't scientific.Comparisons/contrasts between him and John Wayne Gacy are interesting, as it highlights the difference betwee

Published by Thriftbooks.com User , 20 years ago
I was absolutly spell-bound by this book.Very well written.This book however is not for amatuer readers.Delves deeply into the whys and hows of this wickedly sick individual.Definatly not a bed time story.5 plus stars.

The best book on a serial killer I have ever read.

Published by Thriftbooks.com User , 24 years ago
This book is not for the timid. However, if you truely want to get into the mind of a serial killer, this is the book for you. Of all the books I have read on the subject, this offered the most insight into the mind of the actual killer. From the moment I picked it up, I could not put it down.
Trustpilot
Copyright © 2022 Thriftbooks.com Terms of Use | Privacy Policy | Do Not Sell My Personal Information | Cookie Preferences | Accessibility Statement
ThriftBooks® and the ThriftBooks® logo are registered trademarks of Thrift Books Global, LLC