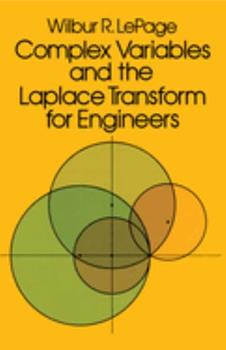 Complex Variables and the Laplace Transform for Engineers

You'll learn it well from this gem of a book

Published by Thriftbooks.com User , 12 years ago
In 1962 I had a course which was supposed to teach me this mathematics. I passed, but it failed. I really didn't understand these topics well enough to apply them. Two years later, in my first year of graduate school in electrical engineering, I had a mandatory course that used this textbook. That time I really understood what this math was about, how to use it, and how to build on it. Part of that was due to good teaching, but a major part was due directly to this book. This textbook is a gem, a brilliantly and clearly written text on an area of mathematics that is highly important to more than a few areas of engineering. My office mate of many years ago liked it so much that he took my copy and never returned it. I'm about to buy it again (in paperback this time) because I've forgotten some topics that I need to restudy. I know LePage will teach me well once again.

Excellent and practical text for complex analysis and transform theory

Published by Thriftbooks.com User , 12 years ago
This is one of my all time favorite math books. Transform theory is covered as rigorously as can be done without introducing measure theory. The level of detail used makes application of the subject much easier since the restrictions about where and how the mathematics can be applied are clear. While providing some of the fundamentals and details that one wouldn't necessarily have time to cover in an engineering course, this text is still very accessible. With only self study from this text I learned complex variables, Fourier transform theory, and Laplace transform theory using this book (in between first and second year engineering terms). Later when we covered this in school I repeatedly referred to this text instead of my course text (despite that one also being excellent).

Good material for a self-study, ok as a reference

Published by Thriftbooks.com User , 14 years ago
This book makes an excellent guide for self-study on the subject. It is very detailed, deliberate and self-contained. Even though Laplace transform is in the title, he doesn't get to that until chapter 10, since there is a great deal of background material he covers to get there. The book may be better titled "Everything you need to know to use Laplace transforms", since it is more background than actual material about Laplace transforms. He doesn't provide much in the way of look-up tables of Laplace transforms, which I thought was kind of strange. He states that you can compute them yourself once you have learned all the material in the book... true, but I would still have liked tables. If you are a grad student doing anything with Laplace transforms, and you are not in mathematics, this is a good, cheap book to get. It explains many of the essential proofs and theorems in ways non-mathematicians can understand (or at least it did for me). He has lots of figures, which I like (why do math books never have figures?)
Trustpilot
Copyright © 2022 Thriftbooks.com Terms of Use | Privacy Policy | Do Not Sell My Personal Information | Accessibility Statement
ThriftBooks® and the ThriftBooks® logo are registered trademarks of Thrift Books Global, LLC