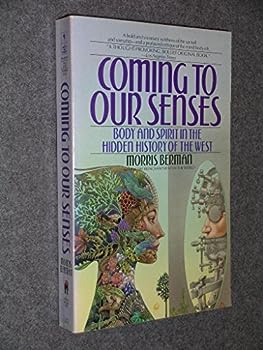 Coming to Our Senses

An ambitious and provocative analysis of the relationship between culture, mind, and body in the history of Western society, Morris Berman s influential classic "Coming to our Senses" has been... This description may be from another edition of this product.

Coming to Our Senses

Published by Thriftbooks.com User , 12 years ago
According to Berman, we have literally lost our senses - not our minds but our bodies - because we have denied our physicality. In this provocative analysis of the underlying structure of Western civilization, Berman explores the relationship between our physical experience of the world and the larger culture of which it is part. He evaluates the studies of infant behavior in front of mirrors, analyzes the iconography of human/animal relations, from cave paintings to Disney cartoons; investigates esoteric breathing techniques and other occult rituals; and examines the nature of creativity. Uncovering the "hidden history" of somatic experience, Berman shows how Christianity has its origins in Jewish "ascent" techniques, how the idea of romantic love grew out of medieval Christian heresy, how modern science arose from Renaissance mysticism, and how Nazism was the most recent episode in a recurring cycle of orthodoxy and heresy. A radical and unconventional work of history and philosophy.

The last brick in the wall?

Published by Thriftbooks.com User , 17 years ago
First I have to say this book is fantastic. Wonderfully written with a huge slew of great "ideas" (sorry!) to chew on. Basically he's saying most humans at present (and for a longer historical period), especially western or technocratic society people, are filling our "nomen" (psychic emptiness) with TV and religion and drugs and whatnot, because we are "ungrounded" not integrated with our physical bodies and senses. So the implication is that if we could get somatically grounded again then we'd throw away the cars and the bars and the wars and make sweet love all day. As a long-time tai chi and martial arts devotee, I can relate to this body-grounding stuff. Sounds great, where do I sign up? Only thing I wonder about in this analysis (maybe overthinking it with my head of course) is that throwing out all that delusory bathwater in favor of 'the body' and 'the senses' as somehow non-illusory and privileged - is that justified? I don't mean throwing out all the other junk, that's fine, but for all I know, even "the body" and "nature" and "the senses" -all that stuff Berman likes - might ALSO be self-generated delusion as well, just woven at a more fundamental level to prop up an even more profound nomen. I'm saying I agree with his puncturing all that other junk, but maybe "the body" too is just another brick in the wall. In the Matrix, the people jacked in believed they were experiencing full somatic integration, but it was all just more mind games. Maybe that's us too.

Enter at Your Own Risk...

Published by Thriftbooks.com User , 21 years ago
About once or, (if you are very fortunate), twice in a lifetime you discover true love. The same rare infrequency applies to great books that have the implicate energy to invade our paradigms.Morris Berman's "Coming to Our Senses" hits you in the gut, pure and simple. Like the path of love, it takes you on a journey filled with joy, familiar whisperings, strange and beguiling propositions, self-revelation and hidden oubliettes.What is this book about? Well, it's about your body, and how your "you" is a temporal repository of all that can be known. It is about how our "body-selves" contain the organic architecture of virtually everything we see and sense each day, including "history", political structures, philosophic insights, ego-identification, family relations, human interaction, and more.And it deserves to be read by anyone inhabiting this mortal coil.Unlike many "New Age" and "Self-Help" books, CTOS will not take you on a blissful sojourn through meadows filled with the trill of Larks. Instead, it will probably challenge every safe and comforting assumption you have about yourself, your identity, and the nature of the human world. For that reason alone, this work will either be remembered as a brilliant marker, or relegated to the ash-bin of history. You will agree with the former or the latter depending on how far down the rabbit hole you are willing to go to chase Berman.

Published by Thriftbooks.com User , 22 years ago
Mr. Berman, is, I believe, a truly masterful writer and historian. His writing is not only accessible to a middling intelligence such as myself, but brings one's knowledge and understanding of the history of the West to a more sophisticated, subtle level. His examination of human beings' current dread of what he terms the Void, and how this relates to the root cause of human suffering, addictions and even mass genocide is wide in scope and amazingly detailed and precise. What many scholars will find most unique about this book is the way Berman inserts his own persona into the telling, (as he must to avoid hypocrisy to his theme!) and his proposal that history is, finally, not ever truly objective, nor should it be. His book provides a prototype and exploration of the possibilities of a type of history which is essential, that of somatic, or bodily experience. The depth to which Berman pursues the root cause of human tribulation is exceeded only in Eastern philosophy: thus my only criticism is that his command of this area of knowledge were more complete. If only Berman and Ken Wilbur could collaborate on a book!

Somatic Epistemology for the Post-Cartesian Paradigm

Published by Thriftbooks.com User , 23 years ago
In this densely-researched work, Berman explores the world's major paradigm shifts from the criterion of heresey. Beginning with the heresey of Jesus Christ and culminating with that of the Third Reich of Nazi, Germany, Berman questions the underpinnings of the status quo civilization. "Coming to Our Senses," like Berman's first work, "The Reenchantment of the World", reconciles the somatic relationships fundamental to the human condition with those that define the accepted realities of modern science. "Coming to Our Senses" should be required reading for those interested in the histories of science and morality in the western world, how they could change, and why.
Trustpilot
Copyright © 2022 Thriftbooks.com Terms of Use | Privacy Policy | Do Not Sell or Share My Personal Information | Accessibility Statement
ThriftBooks® and the ThriftBooks® logo are registered trademarks of Thrift Books Global, LLC