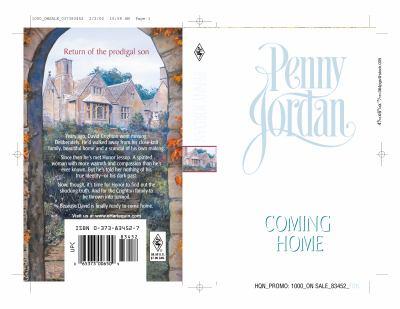 (Book #10 in the The Perfect Crightons Series)

This description may be from another edition of this product. Coming Home by Penny Jordan Years ago, David Crighton went missing. Deliberately. He'd walked away from his close-knit family, beautiful home, and a scandal of his own making. Since then he's met...

Published by Thriftbooks.com User , 21 years ago
Once again, Penny Jordan works her magic. A wonderful conclusion to the Crighton family saga. Coming Home finally answers the questions about where David Crighton has been since he disappeared from Haslewich. Will his twin brother Jon accept his return to the family fold? How will his children Olivia and Jack react to his re-appearnce? Definately a must! I hope Penny Jordan follows up with additional tales of the Crightons. Perhaps Joss or John???

Published by Thriftbooks.com User , 21 years ago
"Coming Home" tells the story of David Crighton's return. David was introduced in "The Perfect Family", the first book in the Crighton Family series. In that book, the family gathers to celebrate the 50th birthday of twins David and Jon. As the first born, his father placed David on a pedestal at the expense of his more deserving twin brother Jon. Struggling under the pressure of trying to live up to the image his father has created for him, David commits a desperate act--he embezzles money from one his clients. At the party, he suffers a serious heart attack. While recuperating in a nursing home, David decides he wants out. He checks himself out of the nursing home, turning his back on his family and the life he despises, and walks away--in his mind--for good.In "Coming Home", David decides to return. He's spent the past years in Jamaica, working alongside Father Ignatius, a Jesuit priest, caring for the sick and dying. The biblical allusion to the prodigal son is indeed appropriate for David."Coming Home" is beautifully written and Penny Jordan fans won't be disappointed. David's transformation is moving and believable. Naturally, I expected most of his story to revolve around what happens when he and his family are reunited. How does he feel? How do they feel? Can the wounds he inflicted ever heal? Unfortunately, none of these questions get answered thoroughly here, and this is the only complaint I have with the novel. "Coming Home" focuses more on the romance between David and Honor Jessop, an herbalist new to Haselwich. In addition, Ms. Jordan introduces two other story lines involving David's children, Olivia and Jack. Smells like a sequel--or sequels--of course!!In "Coming Home", Penny Jordan tells a dramatic story of salvation and redemption with great insight, compassion, and empathy for her hero. We feel David's remorse. We can recognize ourselves in him. That Ms. Jordan can evoke within us these feelings and a strong sense of self-identification with her hero is proof of her talent and sensitivity.
Copyright © 2020 Thriftbooks.com Terms of Use | Privacy Policy | Do Not Sell My Personal Information | Accessibility Statement
ThriftBooks® and the ThriftBooks® logo are registered trademarks of Thrift Books Global, LLC