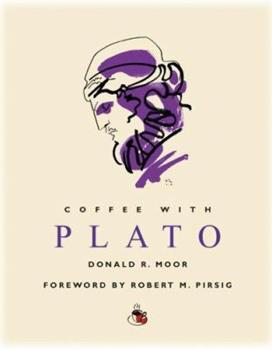 (Part of the Coffee with... Series)

Around 428 BC, Plato was born into one of Athens's most aristocratic ?families, and ultimately gathered around him some of the greatest minds of his age. Travel back to ancient Greece with Professor Emeritus of Philosophy Donald R. Moor and author Robert M. Pirsig ( Zen and the Art of Motorcycle Maintenance ) to meet this legendary thinker. In addition to expanding upon his famous allegory of the cave, Plato talks about learning through dialogue,...

Published by Thriftbooks.com User , 12 years ago
This literal and physically small book is a great and approachable introduction to the philosopher. I'm glad it wasn't titled 'Coffees with' because certainly one can finish it over a taller cup. The book is written in a series of dialogues with the philosopher as if someone with modern day queries was able to have the man alive and accounting for his writings. Considering the nature of Plato's writings this dialgue nature of discovery seems quite appropriate. Fun, brisk and not without a sense of humor, you could do worse for an introduction to the greater, expansive lexicon...just don't expect this to keep you company long.

Published by Thriftbooks.com User , 14 years ago
First of all, please disregard all of the hoopla of Pirsig's name being included in this book. Pirsig only wrote a 2 page introduction to the book, and it contains no new insights to his Metaphysics of Quality. It is simply a short introduction to Plato. So if you are a devoted follower to Pirsig, like I am, don't freak out and purchase this book, like I did. That said, this is a nice little book on the very basics of Plato. Having read a majority of Plato's works, as well as 2 or 3 other introductions on the man, I found this book to be pleasant and somewhat refreshing. Donald R. Moor writes in extremely simple terms, and very clearly breaks Plato down. In fact, it is so simple, that it cleared up a few things that I had missed in reading on Plato previously. He also takes a few of the outstanding differences between Plato's thought and 21st century morality and puts them in perspective. So, the fact that you might find Plato's notion of killing all atheists reprehensible is cleared up a bit, by placing this notion into Plato's mindset on the world. Essentially, if you are brand new to Plato, this will serve as a good introduction. Although it lacks the beauty of Plato's writing, it does give a very basic and simple framework from which to understand him. And for those who are familiar with Plato, it does serve to clear up some outstanding, if not subconscious, issues with him.
Trustpilot
Copyright © 2022 Thriftbooks.com Terms of Use | Privacy Policy | Do Not Sell My Personal Information | Accessibility Statement
ThriftBooks® and the ThriftBooks® logo are registered trademarks of Thrift Books Global, LLC