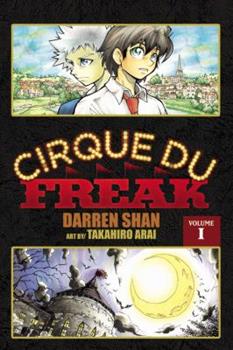 (Book #1 in the Cirque Du Freak: The Manga Series)

by Takahiro Arai and Darren Shan

We receive 16 copies every 6 months.

The world of internationally acclaimed author Darren Shan's Cirque Du Freak brought to life as you've never seen it before Darren Shan was an average kid until destiny brought him to the Cirque du Freak. Now Darren's been immersed into a shadowy world inhabited by vampires, werewolves, and strange creatures the likes of which he's never imagined, and his life will be changed forever

Published by Thriftbooks.com User , 11 years ago
Warning: Do not read this manga if you are prone to tears. This book made me cry. A lot. The adaption of the story is amazing and haunting. I never knew of a book like this one that made me feel pity for the main character. I'm not going to give out any of the plot but overall this book is entertaining and sad at the same time. The ending of the book sent chills down my spine for hours. I just put the book down and sat there thinking about what happened in the story for a minute before I went on wikipedia to look up the original series' plot. Read this book if you're looking for something with horror that sends shivers down your spine and a hint of sadness.

Published by Thriftbooks.com User , 11 years ago
Cirque du Freak is a manga starring Darren Shan based on a novel of the same name written by Darren Shan. That may sound confusing, but it's rather simple, actually. Shan (the real one, although his last name is actually O'Shaughnessy) is an Irish author who in 2000 began his vampire novel series. Wonderfully converted to manga by Takahiro Arai, the first book in the series gains new life, no pun intended, in this hypnotic volume. The Darren Shan who stars in Cirque du Freak is a kid with a rather bizarre obsession: spiders. He loves 'em and can't get enough of 'em. And it turns out he will follow them almost anywhere. That's what gets him in trouble near the beginning of this book, along with his fascination for the macabre. When he spots an advertisement for the Cirque du Freak, a circus that bills itself as "not for the fainthearted," he knows he has to go to see it for himself. The circus is far more ominous than Darren suspects, of course, but he and his friend Steve are compelled to visit. Darren ends up making a giant sacrifice for his friend, one that inducts him into the horrifying world of vampirism, struggling to maintain his humanity and his soul despite being paired with the greatest evil he has ever met. Arai's art is a real thrill here. The story was already well-suited for the manga format, so in some ways it just feels as though the art is finally being paired up with a story that should have had it all along. But more than that, Arai has done a superb job of creating a manga that feels like a healthy mix of styles, both American and Japanese. Arai won a contest search for the artist to convert the story to manga, and it's easy to see how he won. His style feels new and classic at the same time. It's a delight. The book includes a sample excerpt of the prose version of the book, a nice touch for kids and a good way to encourage them to increase their reading lists. (The book has also inspired an upcoming movie.) The book ends on a dark note--no surprise there--but future volumes promise more, much more, in Darren and Steve's stories. -- John Hogan

Published by Thriftbooks.com User , 12 years ago
As a huge fan of the book series, I was intrigued when I heard they were making a manga version. Overall, this was a solid adaptation book one: Cirque Du Freak. I admit, I haven't read the first book in this series for a while, but from what I could tell it was pretty true to the story and any changes made sense. Frankly, I had a huge grin on my face the entire time I read this title. The charm and overall impact of the story seems to still be present. My only issue is the manga style chosen for this manga. It's good, but brings nothing new to the table. To me, it looked like every other shonen title I've picked up. The drawing style, however, is pretty easy to get over as the story is still as great as it was when I first started reading about Darrens journey into the vampire world those many years ago.

Published by Thriftbooks.com User , 12 years ago
Relive the first novel in the most action-packed, fast-paced thriller of a series ever to rule the human and vampire world with this newly published CIRQUE DU FREAK manga. The story surrounds Darren Shan, the infamous spider lover. On his way home one night he is given a flyer to a circus. Not just any other regular circus, however - this is the circus of freaks. Accompanied by his friend, Steve, Darren witnesses the most peculiar and amazing acts that no other circus has to offer. Among these acts are Larten Crepsley and his spider, Madam Octa. It was like love at first sight for Darren as the hypnotic and magnificent spider did her act. Little did Darren know that Madam Octa and the brash decisions Darren himself would be making shortly would change his life forever. Darren's world goes from circus of freaks to the underworld of vampires in a flash. Takahiro Arai's art is extremely mesmerizing and helps the reader picture what the characters look like, or how they should look in the upcoming Cirque du Freak movie. Each manga will mirror each novel, and the manga is read in a true right-to-left fashion and even incorporates some Japanese, such as gokuku = gulp or hena = flop. The story itself may be old, but seeing it in this new light is refreshing and brings back memories of when I first read it in 7th grade. Open up your wallet, because once you read the manga, you are going to want to read the novel itself! Reviewed by: Randstostipher "tallnlankyrn" Nguyen

Published by Thriftbooks.com User , 12 years ago
I picked this up cause I enjoy a little manga and I adore the original Cirque Du Freak series. They are pretty faithful to the book. A lot of dialogue seems lifted right from the pages most of the time. The art is pretty good, it took some getting used since that wasn't quite what I had pictured when reading the novels but by the end of the book I was very excited that I'll be taking this wonderful journey again but in a different medium. Very impressed. :) EDIT: Oh I'd also like to add that if you aren't quite warming up to the art, back when I was in Japan I bought volume 9 and 12 cause they had favorite moments of mine in them and I have to say in comparison the volume one, Takahiro Arai has grown quite a bit as an artist by the end. I think this was also his first manga.
Copyright © 2020 Thriftbooks.com Terms of Use | Privacy Policy | Do Not Sell My Personal Information | Accessibility Statement
ThriftBooks® and the ThriftBooks® logo are registered trademarks of Thrift Books Global, LLC