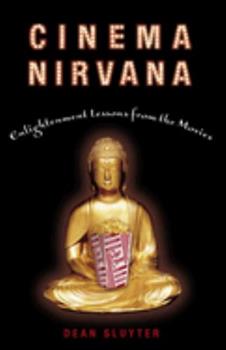 Movie fans and spiritual seekers, unite In Cinema Nirvana , meditation teacher and award-winning film critic Dean Sluyter illuminates the hidden enlightenment teachings of Casablanca , Jaws , The Graduate , The Godfather , Memento , and ten other classic films, revealing spiritual wisdom in everything from 007's secret weapons to the colors of the Seven Dwarfs' eyes. So grab your popcorn, sit back, and prepare to have your mind opened. Cinema Nirvana...

A terrific book and a way fun read!

Published by Thriftbooks.com User , 17 years ago
Cinema Nirvana is a terrific book and a way fun read. I want to go over some of it again because it is quite thought provoking for me. I got a non-New-Age-Oh-Wow-How-Cosmic-Dude look at roots of some of my own beliefs and practices. Completely unexpected, and pleasantly surprising.

Published by Thriftbooks.com User , 17 years ago
A lot of spiritual writing succumbs to the platitudes of new-asge mush. Not so with this book. Cinema Nirvana is extraordinarily well written, creative and insightful. Basically, Sluyter does an analysis of cinema in terms of Buddhist teaching. Each analysis made me think again about the movies I had taken at face value - I even ended up reading some of them twice. I have definitely reconsidered the way I approach popular culture as a result of Sluyter's critical technique. I would recommend this book to anyone who has an interest in Buddhist philosophy, wants to steer clear of the new age drivel, and enjoys well wrought, intellectually stimulating critical writing. Even those who don't have much knowledge of buddhist philosophy, but want fresh crticial insight into cinema should give this book a reading.

A Jokester Sage at the Movies

Published by Thriftbooks.com User , 17 years ago
After searching through the Spirituality section of my local Barnes & Noble, I finally found this book shelved under Film, keeping company with the Marilyn bios and Leonard Maltin guides. That sort of makes sense. Like Certs ("It's a breath mint AND a candy mint!"), "Cinema Nirvana" is an oddball but well-informed romp through the world of classic American film, as well as a savvy guide to meditation and spiritual growth. Sluyter writes like someone who's been around both of those blocks more than once. He excels at noticing the overlooked (the shark in "Jaws" has been terrorizing the beach, but the three heroes illogically hunt it down in deep water, out of sight of land) and squeezing epiphanies out of it (the ocean represents the deep waters of the infinite, where familiar moorings are left behind). Sluyter's brand of spirituality is mostly - but not dogmatically - Buddhist, with the plain-spoken, common-sense approach of the best Buddhist writers. His writing is extremely clear and often very funny. His wit and his skillful use of personal stories (his saga of involvement with a cultlike group in the "Invasion of the Body Snatchers" chapter, or his account of the psychedelic 60's in "Easy Rider") make for top-notch entertainment. But what's most entertaining is watching him make astonishing connections - his cosmic interpretation of the lyrics of "Jailhouse Rocks" will blow your socks off.

The Way of Film

Published by Thriftbooks.com User , 17 years ago
Cinema is an art form that combines still photography, motion, and sound on a grand scale. The combination of the sheer number of individual stills, the technology of light, and the magic of sound (the first element of creation in the secular model) is sheer wonder. It is no accident that this miracle of creative intelligence happens in large interior spaces, darkened, and viewed in the presence of many other souls focusing their attention to a single location at the front of such chambers. For nearly a century, such temples of light, motion, and sound have reached into the interior spaces of individual viewers not unlike the model of Self versus self found in Eastern traditions. The form has become a tool of persuasion, propaganda, and profit effectively used and replacing reality itself--"live" events are no longer complete without a simultaneous broadcast on it derivative technology--television. So, Dean Sluyter makes explicit what has been implicit in the technology and the form. Sort of like Hero's steam engine that opened the doors to the Egyptian idol, so too does the cinema make possible the worship of our secular religious values. When we look at cinema, we must learn to see beyond the image, the motion, the sound, the thrill--we must learn to see the screen and the light--we must learn to recognize the structures of our own self and creative intelligence that connects us, the viewer, with that of the director/producer. Actors and props are the doors of the idols, but the vision of the director/producer is the Hero. Dean takes us through this process. He ignores the obvious selecting the obscure in order to make clear how the underlying principles of intelligence and self are expressed to us in current symbols. He is not DE-constructing--he is IN--structing. Dean is our needle and we are his thread, to borrow the image of teacher and student used by the 17th century mystic and warrior, Miyamoto Musashi. He pulls us through the warp and the woof of the cosmic fabric of our mind to help us see old themes in new insight. Snow White is discussed in Sashimi terms of Asian enlightenment and expansion versus the ponderous fatty sausage of Germanic Grimm or a Yorkshire Pudding Campbell. We are treated to a pastiche of the soul's yearning to find fullness of Self. Marlow represents a Light Warrior girding his loins to vanquish the forces of ignorance driven by passions and the senses. But more than an exercise in the new American idiom of enlightenment, I am drawn to the volume as a document, a testament, of a generation's contribution to the growing richness of the American Mind and Spiritual Capital. Dean, like his subject, is telling us about things he himself is struggling to express. Like all of us, Dean is reassessing and revising his own experience of reality and our American experience with respect to his own consciousness. We are brought inside his awareness and witness his meditation. We have a theme, a mantra (a

Published by Thriftbooks.com User , 17 years ago
Dean Sluyter has done it again! If you are looking for yet another place to find the seemingly ubiquitous and universal teachings of spiritual practice, Dean has opened the doors of american popular film. I loved rethinking some of my favorite movies as important spiritual teachings. What I found most helpful about this book, was that it explained what can be difficult concepts in easy to understand ways. Using movies has his area of exploration, Dean takes spirituality out of some far off esoteric eastern tradition and puts it right in my living room. A great book for someone who's just beginning to be interested in spirituality, or a spiritual "veteran" (not to mention movie buffs!).
Trustpilot
Copyright © 2022 Thriftbooks.com Terms of Use | Privacy Policy | Do Not Sell My Personal Information | Accessibility Statement
ThriftBooks® and the ThriftBooks® logo are registered trademarks of Thrift Books Global, LLC