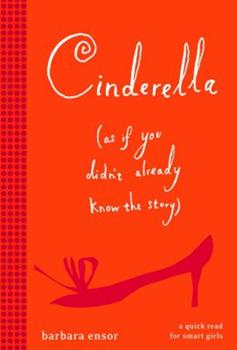 Cinderella (as If You Didn't Already Know the Story)

I know, I know. You've heard the story a million times before. Mean stepmother. Lots of sweeping. Fancy ball. You remember. Or do you? Did you remember that Cinderella was such a nice girl--so smart and funny? You probably would've liked her. Did you know that "Cinderella" was just a nickname? And that her handsome prince loved Jell-o and was a wonderful dancer? Readers will delight in following Cinderella through all the usual happenings, presented...

Turn off the Nintendo and get out your Cinderella

Published by Thriftbooks.com User , 15 years ago
Grandmother alert! This is the perfect book to give to your [...]granddaughter; and if you're really smart, you'll throw in a sheaf of black paper and a pair of sharpened scissors. The tale of Cinderella has been retold many times (my own version, written for adults, is called The Fool's Path: A Tale from the Lothemian Legacy) but, surely, never before has a retelling been written that will appeal to modern pre-teens as much this one. Ensor's Cinderella is a pony-tailed heroine who dwells in a timeless world filled with castles and wallpaper, patent leather shoes and armor, pageantry, peasantry, and golf. The prince may be charming, but not as charming as the silhouettes that illuminate the pages, adding texture and depth to the story. What a delight!

Bought for my daughter- I loved it myself.

Published by Thriftbooks.com User , 15 years ago
I bought this book as a read aloud for my six year old and yes, she loved it. The illustrations and hand written notes from Cinderella to her dead mother added a degree of postmodern hilarity perfect for a smart nine to twelve year old and for me as well. This book makes a great gift.

original retelling of a beloved classic

Published by Thriftbooks.com User , 15 years ago
"Cinderella" is one of the most popular of fairy stories. It has been not only translated into about every language, it has also been modified for our diverse cultures and times. Barbara Ensor's CINDERELLA is a fun little version that is decidedly for contemporary readers. In this version Cinderella tells her story through a series of letters to her dead mother. The letters are sweet, poignant and often funny as she unburdens her heart. When she writes the letter telling of her father's remarriage, she ends with: P.P.S. Don't worry about writing back, I don't expect miracles or anything. (We don't believe in them,) or do we? Of course, this is a story that abounds with miracles. There are fairy godmothers, magic slippers, pumpkins turning into carriages, and all the usual magic of the traditional fairy tale. With several clever twists, however, Cinderella falls in love with a prince who is terribly spoiled and is put out when his parents aren't as concerned about finding the girl who fits the shoe and instead choose to go on a golf outing. The stepsisters are as conceited as ever, but not really as ugly as we have been led to believe: The truth is, they were nice enough to look at, maybe not as pretty as you or Cinderella, but certainly not ugly. All right, some of what they said was ugly, yes, I agree... So this is the book that lets us know what actually happens to everyone. Did they really just live "happily ever after?" There are some surprises here. The nasty stepsisters have to move out so Cinderella and the prince can provide a sanctuary for wild animals. Cinderella's father and stepmother are given royal dispensation and allowed to stay in the castle (provided the stepmother works double shifts on the cleaning staff). Most importantly, Cinderella and the prince learn a great deal about each other: "As the love between them grew, they began to trust themselves, even the dark scary places." No one pushes little Cinderella around anymore. So finally there is peace in the kingdom as Cinderella insists that big bombs just don't interest her in the least. The artwork is made up of creatively rendered silhouette cutouts. Cinderella's letters to her mother are handwritten, smudged with ink and scratched out words. This book could easily translate into an animated Shrek-like film that would delight people of all ages. Don't miss this very original retelling of a beloved classic. --- Reviewed by Sally Tibbetts (stibbetts@maine207west.k12.il.us)

Best book in the world - really!

Published by Thriftbooks.com User , 15 years ago
The book expresses all of Cinderella's feelings, unlike the Disney version. When Cinderella writes a note it's sort of sloppy handwriting - but at the end it's elegant and beautiful. If I could, since it is summer vacation right now, I would tell all of my friends that it is the best book in the world. By Helena

Published by Thriftbooks.com User , 15 years ago
Reading as an adult this version of the Cinderella fable is rewarding in a number of ways. Its exploration of Cinderella's feelings is new and intriguing. The illustrations and writing by Ms. Ensor are invariably right on, always funny, sometimes hilarious. This is reading as pure pleasure!
Trustpilot
Copyright © 2022 Thriftbooks.com Terms of Use | Privacy Policy | Do Not Sell My Personal Information | Accessibility Statement
ThriftBooks® and the ThriftBooks® logo are registered trademarks of Thrift Books Global, LLC