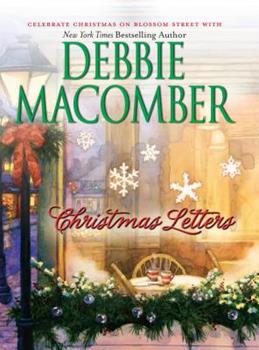 (Book #3.5 in the Blossom Street Series)

Katherine O'Connor often spends her days at a cozy caf on Blossom Street in Seattle--where she writes Christmas letters for other people. She's good at making their everyday lives sound more interesting. More humorous. More dramatic.But for Dr. Wynn Jeffries, who also frequents the caf , Christmas means lies and deception. In fact, the renowned child psychologist recommends that parents "bury Santa under the sleigh." Katherine, however, feels that...

Published by Jennie.reads , 10 months ago
This wasn't my favorite of the Debbie Macomber holiday romances I've read so far this season. I didn't like KO's focus on her weight, and how she gained 2 pounds and it was the end of the world. But I thought the story as a whole was cute, I just wanted it to be a bit longer. I wanted more conversation about the hero and heroine's differences.

Have Yourself A Merry Little Christmas Book

Published by Thriftbooks.com User , 14 years ago
Debbie Macomber captures the mood of Christmas, its sights, sounds, and tasty treats, in her annual holiday gift to her readers. Her likeable heroine even writes Christmas letters for other people as a "second job." Between her at-home work as a medical transcriber and hunting for the perfect job in public relations, she has found the way to make even mundane or depressing lives cheerful for the annual Christmas message to friends and families. Heroine Katherine O'Connor (K.O. to her friends) is outspoken and brutally honest, especially when she crosses paths with renowned child psychologist Wynn Jeffries. She has been predisposed to dislike the attractive doctor's philosophy of raising free children since her own two nieces have started to run amuck once K.O.'s sister adopted his child-rearing techniques. When they do meet, there are fireworks and harsh words, but an attraction that is undeniable. They disagree on many things, but somehow they agree that they have something special. There is the inevitable break-up until both discover that love means accepting your differences and Christmas is about sharing. No great surprises in this one, but a totally enjoyable tale to add to your happy holiday mood. If you leave out cookies for Santa and visions of sugarplums dance in your head, this is a perfect addition to your holiday reading.

Published by Thriftbooks.com User , 14 years ago
Katherine O'Connor (known as K.O.) is sitting in a café on Blossom Street working on her part-time job of writing Christmas letters for other people when she spots Dr. Wynn Jeffries. Dr. Jeffries has written a book called "The Free Child" in which he says, among other things, that parents should not allow children to believe in fantasies such as Santa Claus. K.O's sister Zelda swears by the book, but K.O. feels that the book has turned her nieces into brats and tells Wynn exactly what she thinks of him and his book. Not a great beginning for a relationship but K.O's neighbor LaVonne claims to have had a psychic vision that K.O. and Wynn belong together so she manipulates another meeting between the two. To her surprise, K.O. and Wynn get along great and are soon dating. But will their relationship stand up to the very real differences between the two? "Christmas Letters" is the perfect book to read to get a break from the stress of the holidays. It's a quick and humorous read. The romance between K.O. and Wynn is very sweet and there's even a second romance thrown in that's very cute. There's gentle humor throughout the book from the Christmas letters K.O. writes (especially the one she writes for LaVonne); to LaVonne's psychic vision from kitty litter; and to when K.O. and Wynn baby-sit her nieces, to name just a few. For a short book, the characters are pretty well developed: K.O. is a strong heroine, especially at the end which I really liked; LaVonne with her psychic "visions" is a bit eccentric, but loving; and Max, Wynn's aging hippie father. Wynn, with his unsettled childhood and troubled relationship with his father is the most developed and likable character. Fans who have read other books by Debbie Macomber will be pleased that "Christmas Letters" takes place on Blossom Street and several characters from her Blossom Street books make cameo appearances in this book. I wish the book had been a bit longer since it doesn't take that long to read, but the length is perfect for the hustle and bustle of the holiday season. "Christmas Letters" is a good book to read to put you in the holiday spirit.

Published by Thriftbooks.com User , 15 years ago
Her sister Zelda knows that Katherine "K.O." O'Connor has a full plate. Besides working as a medical transcriber and searching for a better job, K.O. writes Christmas letters for other people. Z knows K.O. is so good, her side business at the French café on Blossom Street in Seattle is booming. Famous child psychologist Dr. Wynn Jeffries thinks Christmas is a commercial lie. He believes kids should know the truth about Santa. K.O. thinks otherwise and that kids should have some whimsy in their life. He got her tossed out of a local bookstore and now wants her removed from the French Café though he admits to himself he enjoys their debates over his "Free Child" methodology. She accuses him of being Dr. Frankenstein causing the change in her formerly precocious angelic nieces into cold monsters so she wonders why she cherishes their arguments. This is a fun holiday romance as Debbie Macomber warms the hearts of her readers with this fine Christmas cheer. The two lead combatants make for a nice coupling as she really believes in the magic of the holiday while he literally writes if off as a bah humbug waste of parenting. Fans will enjoy how these beloved enemies find the way to each other's heart. Harriet Klausner

Published by Thriftbooks.com User , 15 years ago
Christmas Letters is one of those books that hits home. I laughed all the way through especially during the baby sitting gig and the brown tailed African rat made my day. This is a must read for Debbie fans.

...Will warm you from head to toe, and leave you craving more

Published by Thriftbooks.com User , 15 years ago
Twenty-eight-year-old Katherine "K.O." O'Connor, adores the holidays on Seattle's Blossom Street. She spends her mornings lounging at the French Cafe, a peppermint mocha and bran muffin seated in front of her, and clicks away on her laptop, creating Christmas letters for the hurried and harried who have no time to write their own. It may seem like a crazy job, but it gives K.O. pleasure knowing that she's helping people out around the holidays, and gives her a chance to get away from her never-ending job hunt and medical transcription wonderland. However, when K.O. finds out that her younger sister has decided to boycott Christmas, and bury Santa under the sleigh, ending all of her lifetime holiday traditions and creating a horrible holiday atmosphere for her twin daughters, all because of a ridiculous child-rearing book written by Dr. Wynn Jeffries, K.O. gets angry. She feels that Dr. Jeffries is a pretentious quack, and finds his theories borderline insane. But when she comes face to face with the doctor of the hour, K.O.'s opinions quickly begin changing. Suddenly she realizes that the man who seems so evil on paper, is actually quite a warm-hearted fellow, who just happens to be quite easy on the eyes and absolutely irresistible. Oddly enough, Wynn finds K.O. just as irresistible. But when the two of them see just how much they disagree with one another, and realize that their personalities and beliefs are, quite frankly, on two different sides of the hemisphere, K.O. and Wynn begin to question whether or not their feelings for one another will make it through the holidays, or be shelved with the decorations come January. I suppose I should admit that I'm a sucker for holiday romances, especially those that mention quaint cafes, fallen snow, and presents galore. So you can imagine that I was instantly taken with Debbie Macomber's CHRISTMAS LETTERS the moment I saw the cover, and read the inside flap. K.O. is a wonderful character, who instantly captured my heart. Her love for the holidays, determination to find the perfect job in PR, and creativity in starting a business writing Christmas letters are so admirable; while her witty dialogue, oft-times sharp tongue is hilarious, and keeps you laughing as she muddles through one awkward situation after another. Wynn, on the other hand, possesses many of the same traits as K.O., yet allows them to shine through in a less rough and tumble manner. The romance that develops between both him and K.O. is awe-inspiring; while the difficulties in finding a stronghold for their relationship often leave you on the edge of your seat. The appearances of characters such as K.O.'s friend LaVonne, Wynn's father Max, and LaVonne's assortment of cats, are also quite entertaining, yet never overshadow the main characters of the story, and leave room for a possible holiday sequel starring another pair of lovebirds next year...Will warm you from head to toe, and leave you craving more. Erika Sorocco Freelance Revi
Copyright © 2020 Thriftbooks.com Terms of Use | Privacy Policy | Do Not Sell My Personal Information | Accessibility Statement
ThriftBooks® and the ThriftBooks® logo are registered trademarks of Thrift Books Global, LLC