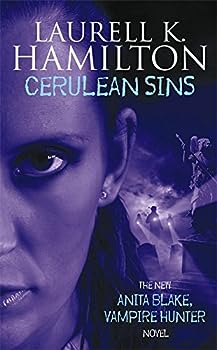 This description may be from another edition of this product. In this novel in the #1 New York Times bestselling series, vampire hunter Anita Blake learns what it's like to be at the new end of a centuries-old bloodline--and just how far she'll let herself get...

I don't know what all the grousing is about....

Published by Thriftbooks.com User , 17 years ago
I loved this book and thought it was a perfect addition to the Anita Blake universe. It addressed plotlines that were alluded to in previous books. (I've read them all, in order, and at this point in the series, I think that helps.) There's a steady, overall story arc going on, and every character in LKH's large and complex cast was skillfully drawn down the line of their own particular development to my satisfaction. In fact, I've gone back to some of the earlier books and have been browsing them for fun, just to see how far the main characters have come -- it makes you curious about where they're going next. My fascination with this series just doesn't end. Hamilton is one writer who'll play you along like foreplay and doesn't neglect to deliver. Get it. Get them all, and enjoy.

Published by Thriftbooks.com User , 18 years ago
I read those unflattering reviews and thus held off buying this book, big mistake. I should have just trusted one of my favorite authors.I love this Anita, she is not such a hypocrite in this book. She seems to have mellowed out a little and is trying to take care of her people. Yes, I do miss the wise cracking shoot them first Anita, but I don't miss the Anita that was just such mean sprited self-rightoues ... to those around her. This book dealt with things that had been sitting on the sidelines for too long; ie., Asher/Jean Claude and Jason. Despite what was written by one reviewer concerning Anita's new Federal Marshall status, I think she handle it quite well and wasn't pushy just professional. Yes, this book dealt a lot with the arduer but that is also where NIC left off, and showing her dealing with it and controlling it is important so that by the next book she can have it more under control like JC does. Also people complained about the amount of sex, the way I look at it is: 1. she is not having sex with strangers, the two/three people that she is with are long time friends and confidants. 2. if you don't like the sex scenes (which there is not a lot of), skip that part.Now that things have been worked out and through for Anita in this book, I too would like to see a lot more action (not in the sexual form). The way I look at this book in comparision to the rest of the books in the series, is that she needed this time to come to grips with her personal life, instead of running away like she had done it the past. And as for those who are uncomfortable with her sexual nature, then realize that this is a fantasy realm and either don't read that section or just lighten up.Overall I wish that I had read this book sooner!!! I can't wait for the next installment.

Published by Thriftbooks.com User , 18 years ago
'Cerulean Sins' has delivered everything I was hoping for and more. I couldn't put it down. I love this book, I love the character development. If you haven't read the earlier books in this series, go back and do so. I continue to be amazed, each character has grown and changed so much. Each one impacting Anita's life, just like each person in my life impacts my decisions. The titilating history between Jean Claude and Asher gets kicked up a notch in this book. Giving this reader, exactly what she'd been hoping to see. Anita exquisitely rides the fence of the moral dilemma she faces. While, Ms. Hamilton knows how to keep the sexual tension at a fever pitch and uses it to it's best advantage. I for one, can't wait for the next book. The author hints that Richard and Anita are headed for something explosive, no matter which way the relationship turns. I'm sitting on the edge of my seat. Thank you Ms. Hamilton.

Published by Thriftbooks.com User , 18 years ago
Sometimes you keep reading a series out of habit, just because you started it and you might as well keep going. The Anita Blake, Vampire Hunter series is definitely NOT one of those kinds of series!!! The 11th book, Cerulean Sins is involving and carries on the tradition of lush storytelling that Laurell K. Hamilton has led readers to expect. Each book has introduced new players and storylines, and Cerulean Sins does a great job of pushing the story forward. In this book, Anita has to make a big decision about Asher, gets more drawn into vampire politics than ever, tries to sort out her ever confusing love/sex life, and still manages to balance a major police case involving a werewolf. Suddenly my life doesn't seem so confusing... I read it all in one sitting, and now I can't wait for the next one!
Copyright © 2020 Thriftbooks.com Terms of Use | Privacy Policy | Do Not Sell My Personal Information | Accessibility Statement
ThriftBooks® and the ThriftBooks® logo are registered trademarks of Thrift Books Global, LLC