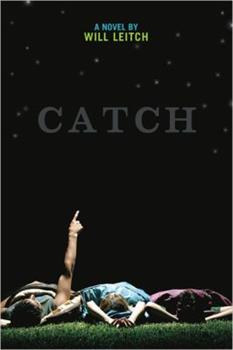 Everything comes easy for Tim Temples. He's got a sweet summer job, lots of love from the ladies, and parties with his high school buddies. Why does he need to go to college? Then Tim falls hard for Helena--a worldly and mysterious twenty-two year-old. Their relationship opens his eyes to life outside the small town of Mattoon, Illinois. Now Tim has to choose: Will he settle for being a small town hero, or will he leave it all behind to follow his...

So good, it gives me chills

Published by Thriftbooks.com User , 15 years ago
CATCH was the best book I've read in a long, long time. At least, the best book I wasn't forced to read. The author made me understand what it's like living in small town America. He also touched on topics that were more familiar to me--maybe too familiar. Like, what it's like to leave everything you know to take a chance on things that are different, confusing, and maybe better than anything you knew before. I felt Tim's happiness when love came his way, and his pain when things didn't work out the way he wanted. All in all, Tim, the main character, has a good heart, and in the story, he discovers that. Readers do, too. Pick CATCH up and go hang out with Tim Temples and his friends on their way from high school to college--and on Tim's way from selfishness to a sense of the world around him. It's a great ride, and you won't be disappointed.

Published by Thriftbooks.com User , 16 years ago
I picked up this book on a whim and spent the rest of the day with it. I loved Tim and his brother's fading connection through baseball, and thought the family dynamics were beautifully written. Tim's affair with an older co-worker was nicely portrayed with just the right amount of attraction and regret. I hope we get to meet Tim again when he begins his new life in college.

Published by Thriftbooks.com User , 16 years ago
I just finished reading CATCH and I was utterly moved. The characters are unique and involving and it perfectly captures that moment between high school and college, youth and maturity. Pick it up!

A story of friendship and family

Published by Thriftbooks.com User , 16 years ago
Tim Temples is a high-school graduate. He has survived the four long gruesome years of hanging out with his posse, drinking, and meeting nearly every girl in their small town of Matoon. Okay, so it wasn't that wretched. Not only that but the Temples family are legend, for playing baseball. Tim's father, Bryan, played in the minor leagues and would have made it to the majors except for injuries. Tim's older brother, Doug, was drafted by the Cardinals, but went to collage instead. Now when Doug comes back from that four year scholarship Tim fears that it has ruined him. Since Tim is the next to go to college, he fears that he will also not finish, become fat, always be angry at everybody, along with an assortment of other things that changed his brother to the pathetic state he is in now. Tim is facing his last summer with his posse called the Horsemen, and the normal routine. At his summer job of carring crates, Tim meets Helena. Helena is 23, gorgeous (with a full rack), and hates his guts. This soon changes, and they become girlfriend and boyfriend. They spend every night together, and the Horsemen are forgotten. Things will change with college soon approaching. Will his relationship with Helena change? Will he end up like Doug, fat and lazy? Who knows until the last page. Quick witted dry humor, cussing, romance, and the average legend in a small town. The closest thing that I can compare this novel to is J.D. Salinger's "The Catcher in the Rye". I won't lie, there is quite a bit of cussing, and sex. But it is not so much that this is all that there is. It's also a realistic fiction story of a teenager heading off to college in the year 2005. It was one of those books where you just kept reading, always telling yourself that you will stop at the next chapter. Ten Chapters later you are still in the same position that you started in, saying you'll stop at the next chapter. You look deeper still. It's a story of friendship and family. Things will change but with the support of those close to you. Reviewed by a student reviewer for Flamingnet Book Reviews www.flamingnet.com Preteen, teen, and young adult book reviews

Published by Thriftbooks.com User , 16 years ago
What a moving, utterly memorable read! This book entirely exceeded my expectations. Having little to no interest in baseball or the midwest, I still found myself completely riveted from beginning to end. The author has an excellent ear for dialogue and a seamless, natural style. Rich in evocative detail and clever nuance--though never in an obvious, overdone way--I would highly recommend CATCH to anyone of any age!
Copyright © 2022 Thriftbooks.com Terms of Use | Privacy Policy | Do Not Sell My Personal Information | Accessibility Statement
ThriftBooks® and the ThriftBooks® logo are registered trademarks of Thrift Books Global, LLC