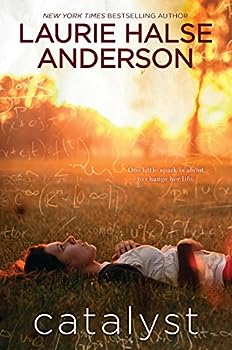 This description may be from another edition of this product. Meet Kate Malone-straight A science and math geek, minister's daughter, ace long-distance runner, girlfriend, unwilling family caretaker, emotional avoidance champion. Kate manages her life by...

Published by Thriftbooks.com User , 15 years ago
The book {Catalyst was such an awesome book. The characters: Kate, Terri, Mikey, and Mitch were my favorites especially Mikey. Towards the end of the book is the best part of the whole thing. You don't want to put it down. It reminds me of my brother's life. He is a lot like Kate in so many ways. This book is about a typical teenagers life; the pressure of school, the pressure of friends, waiting for your college acceptance letter (hopefully), and just life at home. I would highly recommend this book to anyone especially those between 12-19. This book is in my top two. It's basically about an average 18-year-old girl named Kate whose mother died and her father is the town pastor, she has a 14-year-old brother and a boyfriend named Mitch. She's waiting for her acceptance letter to MIT, the school her mother went to, and a tragedy befalls the neighbors, which leads Kate from her normal happy life to a rude awakening.

Published by Thriftbooks.com User , 18 years ago
Powerful. Laurie Halse Anderson has created characters and situations that fill the reader with as much stress and emotion as those on the page. We're not sure we really like Kate, the high school senior who suffers from insomnia and runs so hard that she does physical damage to herself. We can sympathize with her college dilemma, but still, I'm not sure we like her. And most readers probably won't like Teri, the harsh outcast character who Kate ends up aiding. But Ms. Anderson writes with such force that we are compelled to read non-stop until we find out the heart-wrenching conclusions that these two difficult characters face.Definitely a high school read and for any adult who remembers what being a teenager is like.

Different from what I usually read... but very good.

Published by Thriftbooks.com User , 18 years ago
I really enjoyed reading this book. It dealt with a lot of issues that many books just don't cover, and it was refreshing to read something different from fantasy for a change (I'm a big fantasy fan). It was also interesting to think about what the title means. To different people, Kate's catalyst was caused by different things... college, Teri, Mikey... it's up to you to decide just what was the turning point in Kate's life and what was the cause.The plot follows an 18-year-old straight A chemist named Kate. Her father is a preacher, which makes the story interesting, because Kate is an active aetheist. She runs at night, irons clothes, cleans her brother's room, anything to get herself out of bed. This causes many of her friends (mainly Mitch, her boyfriend) to worry, but she explains that she can't sleep. Kate is trying to get into MIT, the college that her mother went to, and didn't apply to any 'safety' schools, so if she doesn't make it to MIT she's not going to college. The story also follows Teri Litch, Kate's neighbor, though Kate is still the main character.Catalyst will keep you guessing. It's not a boring, predictable book, and I was surprised so many times in this book that it's not even worth it to write them down. Though the plot was unpredictable, the book still flowed extremely well. Happiness, confusion, loss, anger, grief, and unconditional love were all wrapped up inside, and I can assure you that this book is definately worth reading. :)

A book about REAL teenagers? Couldn't be.

Published by Thriftbooks.com User , 18 years ago
As a sixteen-year-old, I can appreciate Laurie Halse Anderson's writing for its honest and unabashed portrayal of adolescence. In Catalyst and Speak, Anderson recognizes the fact that high school is not necessarily the "best years of our lives" filled with fun, friendships, and happy endings. In fact, Catalyst, while not overdramatic, focuses on many of the unhappy events in the protagonist's life, many of which will impact her future as well. And the book's ending, while relatively satisfying yet abrupt, is not at all reminiscent of the conclusion found in most young adult books.The main character Kate is like many high school "geeks" - she has a good GPA, takes advanced classes, and is on the school track team. She has a boyfriend and a close group of friends, but her life is thrown into tumult when one of her "enemies" moves into her house after a fire. The book focuses on Kate's grappling with the fact that she is not accepted into the one college to which she applied, MIT. Anderson's genius lies, however, not in plot but in character development. Avoiding stereotypes and overdramatization of relationships serves the book well and lays a foundation to which all types of readers can identify.If you are looking for an easy read that is not wrought with petty boyfriend-girlfriend relationships and high school dramas largely focused on prom and getting your first kiss, I would recommend this book to you. It held my attention the entire time I was reading it.And for those of you who are fans of Speak, this book contains cameos by a few of the characters.

Published by Thriftbooks.com User , 19 years ago
... ...But, getting back to Laurie Halse Anderson and to Merryweather High, the setting for SPEAK, and now for CATALYST... What? Yes, indeed, Laurie returns us to the land of the infamous Mr. Neck, and Hairwoman, and Andy the Beast--none of whom we get to see here. The story is set at the end of the school year following SPEAK, and Melinda, in another of Mr. Free-man's classes, does actually make a cameo appearance. So, knowing all of this ahead of time, you are possibly going to open this book and look for it to grab you by the throat and mystify you the way you were immediately mystified by Melinda Sorrentino's treatment on the bus and in the auditorium on her first day at the school. Right? Well, get over it! This is a whole different chemical equation: Kate Malone, minister's daughter, star student, and runner, is a senior who lives for her acceptance letter to MIT--the only college she has bothered to apply to. "Insomnia rocks, actually. You can get a lot done if you don't sleep. I've turned into a hyper-efficient windup Kate doll, super Kate, the über-Kate. I wish this had happened last year. It would have given me more time to study for my AP exams." She introduces us to her family: "Toby and I are the proton and neutron of our atomic family unit. Dad is the loosely bonded electron, negatively charged, zooming around us in his own little shell." She introduces us to her group of friends: "Sara slides her sunglasses across the table. I take off my glasses and put them on. The room mellows to a golden, SFP-protected glow...They are all out of focus now, but...I'd recognize these shapes anywhere. Sara Emery, my BF, is a self-described Wiccan Jewish poet. This would send most parents screaming to the therapist's office, but the Emerys are totally cool with it. I've been asking them to adopt me for years.Travis Baird is to Sara as water is to fire: opposite and necessary. Trav is a freakazoid good guy with a taste for body art. The vice principal in charge of discipline has been aching to bust him for four years. He refuses to believe that good things can come in colorful packages.A warm hand snakes around my waist. My knees buckle and the hand pulls me down into the very familiar lap of Mitchell A. Pangborn III--my friend, my enemy, my lust." She introduces us to the story's outcast, a tough female named Teri Litch: "The ugly girl, the one who smells funny, studies carpentry at vo-tech, stomps around with sawdust in her hair, and has fists like sledgehammers. Teri beat me up every year in elementary school, fall and spring. I turned the other cheek for a while, then I learned to run. Intelligent life pursues self-preservation." And she introduces us to her "sad excuse of a motor vehicle, a Yugo named Burt." But who or what is the catalyst here is one of the things you're going to have to read the book to find out. ...CATALYST, which alternately had me crying and laughing, is a moving story that seeks to knock us off our little career tracks lo
Copyright © 2020 Thriftbooks.com Terms of Use | Privacy Policy | Do Not Sell My Personal Information | Accessibility Statement
ThriftBooks® and the ThriftBooks® logo are registered trademarks of Thrift Books Global, LLC