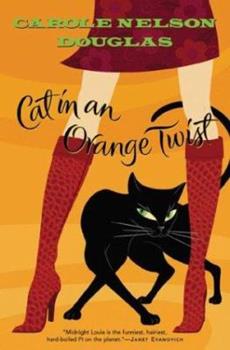 (Book #16 in the Midnight Louie Series)

Temple Barr is a sharp and sassy public relations ace in Las Vegas whose life is finally taking a turn for the better. Hard-nosed homicide lieutenant Carmen Molina is too busy chasing after her own ex-lover, rogue L.A. cop Rafi Nadir, to pursue Temple's boyfriend, sexy magician Max Kinsella, and nobody Temple knows has been murdered... at least, not in the past few weeks.Temple takes this downtime as a signal she should buy a new pair of Jimmy Choo...

A new favorite in the amazing Midnight Louie series

Published by Thriftbooks.com User , 17 years ago
I'm desperately addicted to these books. While I really enjoy the individual mysteries, and "Orange Twist" is a good 'un, I'm absolutely hooked on the overarcing storyline, laid out in what will, eventually, be 27 chapters (starting with "Catnap" and "Pussyfoot" before the alphabet starts with "Blue Monday"). About the only thing I can't stand is that I'm going to have to wait about eleven years for, oh, say, "Cat in a Zebra Stripe"! This installment moves the lives of our intrepid cast of characters forward without losing track of the intriguing mystery at hand, murder in a new furniture store. The ever-resiliant Miss Temple Barr tackles her PR duties while sleuthing out who the culprit(s) are with her usual finesse and style, and in the meantime, my favorite golden boy Matt finally makes his move while the nice-but-rarely-there Max is too busy, once again, saving the world from rogue magicians to get in the way. Pardon my lack of impartiality, but good. Midnight Louie and possible-daughter Midnight Louise round up a cast of cat characters to help save the day and rope in the baddies and, of course, save Louie's beloved Miss Temple! Also nice to see some folks from the "old days" back, including Danny Dove and the flotilla of Fontana Brothers. I also very much appreciated the extremely sensitive and intelligent use of gay characters. Hooray for Ms. Douglas. All in all, an extremely pleasant read and my favorite of the series since "Cat in an Indigo Mood." It's really tough to have to wait a year between chapters. One fun thing is to read the series rapidly and in order, which, with this volume, is up to 16 chapters and of course has taken over a decade to write, while only about two years of "book time" has passed, which means Las Vegas has swelled, changed, and grown at an awesome rapid pace. Topical events happen in staggeringly rapid session. But no matter. Even with the occasional inconsistency (often a sudden change of hotel or stumble over detail, and just a few little things anyone familiar with Vegas might cringe at), I just can't wait for the next installment.

Published by Thriftbooks.com User , 17 years ago
When I wrote my review for the last book in this series, _Cat in a Neon Nightmare_, I said that due to the deterioration of the series over time I was going to give it one more book to see if I wanted to continue reading it. Well, this book paid off. Carole Nelson Douglas has returned to basics, and _Cat in an Orange Twist_ is the most enjoyable Midnight Louie book for quite some time. Temple Barr is acting as PR rep for a large furniture store that, as part of its grand opening, is hosting an internationally known Feng Shui master. During the opening cermonies, the store comes under attack from unknown people bearing automatic weapons. Shortly thereafter, one of the furniture store employees is murdered. Because murder is bad public relations--and because she knew the victim--Temple leaps in to make right. "Orange Twist" resembles earlier Midnight Louie books in that the crime takes the main stage here. Gone, for the nost part, are the long, introspective monologues that made the last few volumes increasingly tedious. We still get insight into the characters, but it's more subtle. CND has let them stand on their own, rather than telling us what to think, and that was a good choice as far as I'm concerned. There are also fewer of the main characters to deal with. Several ongoing plotlines take a back seat and I can't say that I miss them. At the same time, some old faces are shown in a new light and I enjoyed that a great deal. Temple's (and Louie's) investigation proceeds along lines standard to the genre and this series in particular, with lots of red herrings, spooky locations and strangely overblown action sequences. Sloppy editing and a few internal inconsistencies prohibit me from giving this book 5 stars, but for a good evening's light entertainment, you could do worse than visit Las Vegas with Louie and Company.

Published by Thriftbooks.com User , 17 years ago
Spectacular! Midnight Louie is the best and the brightess of all mystery felines. When characters such as those created by Ms. Douglas are able to reach out and grab you and make you truly believe they are as real as you and I...well this is book writing at its finest! We all know one of those feisty,aloof,smarter than humans cat. The one cat that swaggers instead of walks, well this is Mr. Midnight Louie and his associates. You will not be disappointed in this wonderful book or any other Carole Nelson Douglas and Midnight Louie adventures. I am a fussy reader of mysteries and I can not put down these books once I begin reading. Midnight Louie and company really speak to you and what a wonderful gift it is for a writer to create characters that communicate with the reader. Carole Nelson Douglas has a rare and beautiful gift. Please support Midnight Louie you will Love him as much as I do! Alison B. Cuff Midnight Acres in Middleboro, MA

Louie, Louie, So Good to See You Back

Published by Thriftbooks.com User , 17 years ago
Midnight Louie is back, in slighter finer form in "Cat in an Orange Twist." Also back are his might-be-daugther Midnight Louise, Temple Barr and the rest of the usual gang. They're mixing it up with a new group in this brand-new adventure in this great series. In this edition, Midnight Louie and Temple find themselves mixed up in the world of feng shui and interior design. Temple is doing publicity for the appearance of a feng shui personality at a furniture store when what else should happen but murder. It turns out that the inner workings of this store are far more complicated than anyone could have ever thought and to figure things out, Temple will be hooking up with some unusual characters, while fending off some as well. Midnight Louie is also right in the middle of the action, along with some feline help, not that he still isn't the star. The ending for this book is definitely one of the best yet of the series. In fact, there are a lot of great moments and surprises in this newest book of the series. I really enjoy this series because it has a definite feel of realness about it. Sure, there are other stories about mystery-solving cats, but in this one I really feel like I get an in-depth look at all sides of the characters. Sometimes it's not pretty, but it definitely has me waiting for more. Shall we next be seeing "Cat In a Purple Predicament?" Nahhhhhhhhhhhhhhh.

Published by Thriftbooks.com User , 17 years ago
Life has been quiet for public relation specialist Temple Barr for the last few weeks. She has not been involved in any homicide investigations, nobody she knows has been involved in a crime, and Max Kinsella disappeared from her life again. She is unaware that the former magician is working with his former mentor Gary Gandalf in order to infiltrate the Synth, a cabal of magicians with a secret agenda that threatens world peace. Temple is the PA maven for Maylords Furniture opening and she is coordinating feng shui mover Amelia Wong's appearance at the grand opening. The event is ruined when someone starts shooting and the lights go out. Nobody has a clue who the intended victim was but a couple of days later, Simon, one of the decorators, is killed. His lover is Temple's friend so she is determined to bring the killer to justice. Not long after that homicide, the manager from hell is killed and Temple cannot figure out how the two murders connect until her fabulous homicide solving feline Midnight Louie gets involved. Carole Nelson Douglas takes the Midnight Louie series to a new dimension. Matt declares his feelings for Temple and even acts on them; Max is keeping his distance from Temple so he does put her in danger and Temple teams up With Rafi Nader, Molina's ex-lover and the father of her child, to bring the guilty to justice. The heroine discovers that Rafi is not as dark as Lieutenant Molina paints him and she is thinking as much about Matt as she is about Max. CAT IN AN ORANGE TWIST is another wild, wacky Midnight Louie roller coaster ride. Harriet Klausner
Copyright © 2020 Thriftbooks.com Terms of Use | Privacy Policy | Do Not Sell My Personal Information | Accessibility Statement
ThriftBooks® and the ThriftBooks® logo are registered trademarks of Thrift Books Global, LLC