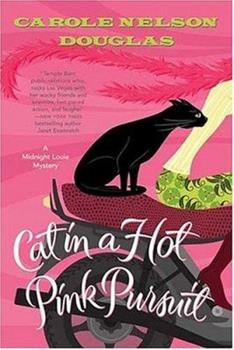 (Book #17 in the Midnight Louie Series)

Ace freelance PR woman and amateur detective Temple Barr is 30-going-on-19 when she agrees to do homicide lieutenant Carmen Molina a big favor and go undercover as a contestant at Teen Idol, a TV reality show. The lieutenant is worried because someone is threatening the contestants--including her own 13 year old daughter--by leaving mutilated Barbie dolls all over Las Vegas. Reliving the years of melodrama and teen angst while acting as a nanny-cum-diversion...

Published by Thriftbooks.com User , 13 years ago
Once again, Carole Nelson Douglas, has Midnight Louis and his "roommate" Temple Barr in the middle of the action for both conventions in Vegas and murder and romance. The action is all over the board from a stalker for Lt Molina, a proposal for Temple, and lots of pink and purple clothed ladies. A can't miss adventure!!

17th in the series

Published by Thriftbooks.com User , 13 years ago
This is the 17th book in the Midnight Louie series. Temple's petite stature and youthful looks work in her favor for a change, as, at Lieutenant Molina's behest, she enters a Teen Idol contest--a reality show. Molina's daughter Mariah entered behind her mom's back, and there've been some creepy threats targeting the show, so Molina wants someone close by to keep an eye on Mariah. In exchange, she promises to lay off on her investigations of Max. Meanwhile, Matt Devine is off to Chicago at his mother's request, to find out information about his biological father's family, and Max is back undercover again. There's a theme in this book of family and connections--Molina struggles as a single mother of an adolescent, Temple ends up bonding with Mariah and--horrors!--understanding Molina, and mentoring Mariah. Mariah's unsuspecting (and unsuspected--by Mariah, at least) biological father is at the show as a bodyguard, and there's some tension there as those in the know try to keep him and Mariah apart and Molina worries about whether, when, and how she should tell the two about each other. And Matt's search for his relatives leads him to his father, and the resulting dilemmas, emotions, and lack of emotions. Max, too, has his emotional concerns as he worries about whether his current quest (for his surrogate father) will cost him his place in Temple's life. Even Midnight Louie joins the theme, admitting that Midnight Louise is his daughter. I suppose you could read Cat in a Hot Pink Pursuit as a stand-alone story. The mystery of who is targeting the teen contest and why, and the pursuit of the killer is complex enough and compelling enough to carry the story. But there's also so much emotional punch to this book, and I doubt you'd get the full effect of it without having read the previous books.

Published by Thriftbooks.com User , 15 years ago
So, Anyway, I was about to tell you about Midnight Louie's latest Caper! Let me first tell you that he, too, has a companion. Her name is Temple and she is one cool lady! She is a PR guru, but for some reason, she's always getting mixed up in something mysterious, dangerous... This time, in the Hot Pink Pursuit, she was "bargained" into entering a teen queen contest. Geesh! Duh, she's, like, 30...but because she is so small and beautiful, she was able to pass for 19. Now, why would this major professional lady want to do this? Why, for a man of course! You see, she's involved with a magician, Max--what a hunk! Max is being pursued by the police; specifically, a policewoman named Molina. Molina has a beautiful young daughter, named Mariah, who, without getting prior permission, entered the Tween contest, and was accepted! So, here's the deal, Molina bargains with Barr to enter the contest so that she can guard and protect Mariah...and, in return, Molina will lay off of Max! Sooooooo, you got it, the deal was made. Enter Xoe Chloe, pronounced Zo-ee Chlo-ee, with a Cher long black wig and "goth" makeup and "big" attitude. She and Mariah, backed by Molina's money, splurge on a wardrobe worthy of queen contestants, and fortunately wind up as roommates at the contest location. Of course, my Midnight Louie sneaks along to protect them...because there is murder, no less! And he's on a hot pursuit of the killer! Of course, an added benefit for him was being near Yvette and Solange, silver and golden persians that are soooo not worthy of Midnight Louie...You might know that they would be there too! Meanwhile, another of Temple's love interests, er, I mean friends, Matt is on a hot pursuit of his own. At the stubborn insistence of his mother, he's tracking down information on his father, who is supposed to have died many years ago. The face-to-face meet with his father in a hallway as both men wait for an elevator is a cool scene! And, wonder of wonders, Matt seems to have gained much needed confidence through this wild experience...for he later moves boldly in pursuit of Temple! Did I tell you that Max has been around, searching for Temple, not knowing that she is off "saving him" from Molina... As always, this is a cool whodunit by Carole Nelson Douglas and somehow Midnight Louie figures it out (he's been tracking the pink fruit smoothie smell on suspects' shoes!) about the same time Xoe Chloe does! So Midnight Louie is back at home, stretching his long black beautiful body on the couch when his companion Temple comes home with....Matt??? Now What?! Can't wait to read the next in this fantastic series! And, Oh! I'd just love to meet the super-star, Louie! (As told by Ricki, one of Glenda's cats!)

Published by Thriftbooks.com User , 16 years ago
This volume in the ongoing Midnight Louie series is a strong novel with compelling characters and a complete plot which is comparable in quality to the preceding novels. Temple gets roped by Molina into playing a teenager in a reality-makeover-pageant show in exchange for leaving Max alone. Molina's daughter Mariah is a younger contestant. Murder and mayhem are present as always. Matt heads to Chicago seeking information on his unknown and supposedly deceased father. Max is sort of on the sidelines, building up to something in a future novel no doubt, dealing with the magician retirees. Louie is helping out Temple and is "reunited" with the Divine Yvette and her sister Solange. The ever-perky Midnight Louise also arrives on the scene. Max lurks around Temple's apartment, reminiscing, and wonders if it's all over. Matt surprises Temple at the end, but you'll have to read it to know what he does.

Published by Thriftbooks.com User , 16 years ago
In Las Vegas, anything goes and usually does. A new reality show is coming to town Teen Idol, a program that involves teens competing in two age groups to become queens of their respective divisions can be picked. Unknown to Lieutenant Carmen Molina of the Las Vegas Police Department, her daughter Mariah entered the teen competition and made the cut. Molina reluctantly allows her daughter to go for the two weeks in house event but worries because someone is mutilating the advertising posters and a girl was killed on the site where the audition occurred. Molina asks Temple Barr to go undercover and enter the contest as a teen so she can watch over Mariah; she agrees because Max is nowhere around and hasn't been in quite some time. Her friend Matt is in Chicago looking for some clue that will lead him to the identity of his biological father. A serious of mischievous threats culminates in the murder of the contest's dietician. Temple with the help of her feline companion Midnight Louis investigates to stop the killer from murdering others. Carole Nelson Douglas always keeps her series fresh by taking her characters in different directions and CAT IN A HOT PINK PURSUIT is no exception. For long time fans, secrets are finally revealed and the heroine makes a life alternating decision. The story is told in the third person point of view except when Midnight Louis is on stage and he gives his first hand perspective. This writing technique is deftly handled by Ms. Douglas so that this charming and entertaining mystery is a must read for people who like creative and riveting amateur sleuth tales told mostly by one with a tail. Harriet Klausner
Copyright © 2020 Thriftbooks.com Terms of Use | Privacy Policy | Do Not Sell My Personal Information | Accessibility Statement
ThriftBooks® and the ThriftBooks® logo are registered trademarks of Thrift Books Global, LLC