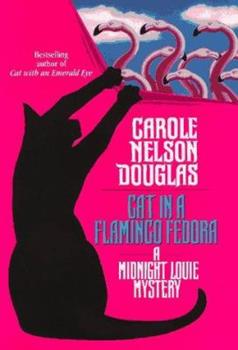 Cat in a Flamingo Fedora: A Midnight Louie Mystery

(Book #7 in the Midnight Louie Series)

This description may be from another edition of this product. That rough-and-tumble black tomcat Midnight Louie and his flame-haired human companion, temple barr, think shooting a cat food commercial will allow them to play hooky from mayhem. But life is never...

Cat in a Flamingo Fedora

Published by Thriftbooks.com User , 12 years ago
This was the second Midnight Louie book that I read. so I knew already that it would be fun to read. I was rather upset after reading a previous Midnight Louie book to learn that Louie was helping to produce kittens, which is a bad thing in the real world. This story resolves that problem in a unique way and the notes at the end reveal the author as a real cat lover. This is more than a fun read. The Matt character brings a note of seriousness and glimpses of truth into the story in a way that is very effective. I hope he gets the girl.

Published by Thriftbooks.com User , 15 years ago
For those who are Louie fans, this entry in the series is entertaining and fun. It's a mix of a mystery, a soap opera, and imaginative fun for all. Especially, Midnight Louie's um - experience and new found awareness. The book offers a little of everything - not unlike the city of it's setting. A little fantasy, reality and good natured fun! It's a coaster ride till the end. You really never know what next, but at the end when the loose ends are tied up, the good news is there is another story to come...

Murder is for the birds.

Published by Thriftbooks.com User , 22 years ago
In Cat in a Flamingo Fedora, amateur sleuth, Temple Barr, finds herself up to her high heels in pink Flamingos and one of the suspects in a murder. When philandering actor, Darren Cooke is murdered and Temple is one of the last people to see him alive, she must once again undergo questioning by her nemesis, Lt. Carmen Molina while trying to solve this murder with an unusual twist. The murder occurs while Temple is playing stage mother to Louie who is filming a cat food commercial with his lady love, the Divine Yvette at Gangsters Night Club. Whenever danger rears its ugly head, however, this feline sleuth drops what he is doing and springs to the side of his human companion to try to solve yet another murder. Louie not only helps Temple, but he must also contend with the murderous Maurice, a feline felon who threatens all of Louie's nine lives. Even if he solves the murder and dodges Mauriice, he must face the wrath of Yvette's human, Savannah Ashleigh! How much can one dude take? Fast paced and as captivating as a litter of kittens, Cat in a Flamingo Fedora gets two paws up!

That feline sleuth Midnight Louis at his show stopping best

Published by Thriftbooks.com User , 24 years ago
Temple Barr, Las Vegas public relations specialist and part time sleuth, finds herself once again simultaneously working both careers. The local Chamber of Commerce has hired her to serve as a liaison between artist Domingo, and the movers and shakers of the town. They hope to obtain permission for the eccentric maestro to plaster their collective properties with about a million pink ceramic flamingos. While acting as stage mother to her cat, the renowned Midnight Louie, who is starring in a TV commercial, Temple meets Darren Cooke, a womanizer and famous comic, who needs her sleuthing help. ....... Darren is being stalked by a woman, through letters and vitriolic phone calls. The near hysterical woman claims to be his biological daughter. Darren wants Temple to find out if this woman is in deed a child of his that he knew nothing about or if she is a dangerous nut. After finishing his heartfelt plea, Darren makes a pass at Temple, who walks out on the aging Don Juan. However, when he is shot on the set, she begins to investigate the women in Darren's life. As Temple peels away the layers of deception, danger to her own life grows stronger, forcing her personal body guard, Midnight Louie, to protect her while looking over his own shoulders to insure he does not become a victim too. ......... Anytime Midnight Louie appears, readers know that they are in for a treat. With her latest entry in the fun series, CAT IN A FLAMINGO FEDORA, Carole Nelson Douglas continues to provide some of the most thrilling and humorous sleuthing west of the Mississippi. ........Harriet Klausner
Copyright © 2020 Thriftbooks.com Terms of Use | Privacy Policy | Do Not Sell My Personal Information | Accessibility Statement
ThriftBooks® and the ThriftBooks® logo are registered trademarks of Thrift Books Global, LLC