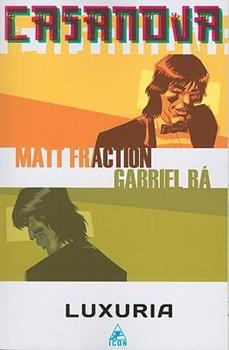 Casanova is back as you've never seen him before The Eisner Award winning team of Matt Fraction (INVINCIBLE IRON MAN, UNCANNY X-MEN) and Gabriel Ba and Fabio Moon (UMBRELLA ACADEMY, DAYTRIPPER, PIXU) bring their appropriately iconic book to ICON FULL SIZE FULL COLOR REMASTERED and REBORN Meet Casanova Quinn, morally flexible and terminally directionless, as he gets abducted across space and time to infiltrate his own father's E.M.P.I.R.E. of law and...

Published by Thriftbooks.com User , 13 years ago
"The shortest, write-it-on-the-back-of-a-business-card pitch for Casanova is "the world's greatest thief gets blackmailed into being a pawn and double agent in a global game of super-espionage." There are more keywords and PowerPoint topics, like The Man from U.N.C.L.E., and Diabolik, Jim Steranko, Jerry Cornelius, Nick Fury, and Our Man Flint. "Then I do a little interpretive dance." -Matt Fraction The most important thing to know before reading this book is that Luxuria was originally published as monthly comic books. They were meant to be dense, stylish little blasts of cool that'd satisfy a reader for the weeks and weeks between issues. So I'd recommend trying to take a pause between each chapter to appreciate and absorb them individually. Other than that, if you enjoyed some of the weirder, frantic, and fun elements of The Immortal Iron Fist, which Fraction co-wrote with Ed Brubaker, then buckle in, because that was the mass-consumption model. This is the pure, uncut stuff. *** Casanova Quinn... imagine James Bond playing the role of a happily morally-corrupt master thief. His twin sister, Zephyr, is the finest agent of E.M.P.I.R.E., the law-enforcement intelligence agency of their world that is run by their father Cornelius. The sudden death (by, like, page 4) of Zephyr knocks Casanova's world out of whack, and is the event that precipitates his being sucked OUT of his world ( timeline 909) into an alternate timeline (919) by Newman Xeno, a bandaged super-genius hedonist running an evil organization called W.A.S.T.E. In the 919 timeline, Casanova is the star secret agent and his evil sister Zephyr is an agent of W.A.S.T.E. The finest agent of E.M.P.I.R.E. (in this case, the 919 version of Casanova) has been W.A.S.T.E.d and the master thief (909 Casanova) is blackmailed by Xeno into taking his place within E.M.P.I.R.E. as a double-agent. Clearly, this book can get a bit complicated. Luxuria follows Casanova on missions as he tries to serve both of his masters and still survive. It has roots in the superspy genre, but mixes in a healthy dose of sci-fi and fantasy that allow the story's trippier elements free reign to go wherever they like. This can also be a negative. The book, at its best, has a great, sexy "just come with me for a ride" energy like an excited child tugging at your sleeve and which totally sucked me in. Sometimes, however, that enthusiasm drowns out clarity in the story, which is a bit egregious a flaw when Luxuria tries to deal with the mechanics of double-crosses in tight spy-story plotting. It's clear Fraction is more interested in thematic resonance, style, and tone. To this end, Luxuria works best for me at points like chapter three, where a simple story's narrative tension is maintained by how Fraction and Ba reveal information to the reader, or in the "Islander" (chapter 5?) story where Casanova and the reader are together in the discovery of big secrets That Change Everything (in that

FAMILY CIRCUS IS GOOD. THIS IS ALSO GOOD.

Published by Thriftbooks.com User , 14 years ago
I like a lot of things. Family Circus is one of those things. It is a circle with some drawings in it, and it appears in my newspaper six times a week. On Sundays, it is not a circle, and I don't like that very much, so I pretend it is not real. This book is also one of those things I like. It is not a circle, but there are circles in it. It is about a lot of things, so for me to say it is about one or two of those things is bad, because I will leave out things that it is also about, and you will not think it is about those things because I did not mention them here, and that would be a failure on my part. So, to avoid such a soul-crushing defeat, I will not try to tell you what it is about. But I will tell you some things that are in this book: a giant robot, a nurse, beards, beverages. Matt Fraction wrote this book while on vacation from being a cop. Gabriel Ba drew it, but not while he was on vacation from anything - drawing is his real job. Fraction might not really be a cop, I'm not really sure what he does. Maybe he sells vacuums, or maybe he does something else. Ba, I'm pretty sure, draws all the time, but he might also sell vacuums, but only as a hobby or for snack money. You should buy this book and read it. If you are sad, it will make you happy. If you are happy, well then good for you. You should also buy other books by both Fraction and Ba; because you need to make it to $25 for free shipping. THANK YOU GOOD NIGHT.

Published by Thriftbooks.com User , 14 years ago
Avocado green on Acid and a psychedelic post post modern physics plot and visual sensibility makes for an exciting read, visual stimulation and flashbacks to the future in the multiverse. Plus I liked that they tackled that whole brother sister love taboo with such style and grace.

Published by Thriftbooks.com User , 14 years ago
This book rocks your socks off. Business socks, sweat socks, which ever you happen to be wearing at the time. And if I'm not wearing socks, you ask?! Well then it rocks the skin right of your feet. This hardbound collection comes in a smooth and shiny cover, packed with story and art literally bursting off every page. The creators intentionally made this comic for the pressed for cash fan, so every issue reads and feels like 2 or 3 of the "other guy's" stuff. You just can't go wrong with Fraction and Ba. Just buy this book if you ever want to feel what it's like to be cool. ever.

Published by Thriftbooks.com User , 14 years ago
I can't begin to tell you how cool this comic is. That's really the best way to describe it, absolutely. Freaking Cool. Alright. It's tangentially in the spy genre, more in the vein of Jerry Cornelius (although much less 'modernistic,' maybe) than James Bond, with generous helping of minty fresh Jim Steranko in there as well. The story? Well, the protagonist, Casanova Quinn, is mixed up between several super-agencies with acronyms for names, and he's also from another dimension or timeline or something. It's a little science-fiction, but not in that "thinky," irritating, way. To express how cool the series is, in the first issue, Casanova fights like a giant floating head in a floating casino. Only, the giant floating head is actually three guys, fused together by crazy Buddhism. Casanova and said head then engage in a titanic floating staring contest. Later, Casanova sets a town ablaze through orgone overdose, steals a god, and has a kung fu battle in the head of a giant robot. And not only is the book filled with crazy, mind-bending set pieces, but the characterization is strong, albeit sparse. Most importantly for a work as, uh, inspired as this, Casanova feels like an authentic person. The dialog is perpetually hilarious and the art sings on the page. It's dynamic and it's in one color, like the old-school Barbarella comics. I think, of all the hundreds of comics I read every year, this is my favorite probably as far back as I can remember. This particular edition is beautifully over-sized and well-designed. I totally recommend it, especially if you haven't already read the book. Umm, in summation, the writer is Matt Fraction and the artist is Gabriel Ba. The book is cool. Yes.
Copyright © 2020 Thriftbooks.com Terms of Use | Privacy Policy | Do Not Sell My Personal Information | Accessibility Statement
ThriftBooks® and the ThriftBooks® logo are registered trademarks of Thrift Books Global, LLC