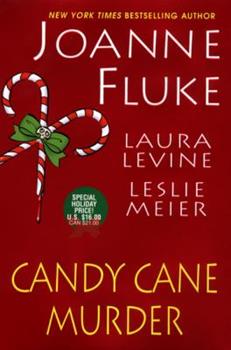 Tis the season for trimming the tree, caroling, baking cookies, and curling up by the Yuletide waiting for Santa to drop down the chimney. But in this festive collection of holiday whodunits, murder is also paying a visit. . . "Candy Cane Murder" By Joanne Fluke When a trail of candy canes leads to a corpse outfitted in a Santa suit on a snowy bank, Hannah Swensen sets out to discover who killed Kris Kringle. . . "The Dangers Of Candy Canes" By Laura...

I love Hannah, Lucy, and Jaine and their mysteries!

Published by Thriftbooks.com User , 3 years ago
I love all the mysteries that I have read! Joanne Fluke, Laura Levine, and Leslie Meier are some of my favorites; these ladies have a way with words and with mysteries!! I plan to read the whole series by all three authors!

Published by Thriftbooks.com User , 15 years ago
This is one of the most wonderful, charming, interesting, and fun books that I have ever read. I was very satisfied when I finished it. This book is three books in one, by three different authors. All three books are fun, very well-written, clever, and entertaining. "Candy Cane Murder" by Joanne Fluke: The first book is by Joanne Fluke. Anybody who reads my reviews knows how crazy I am over the Hannah Swensen series, and this book is no exception. This book starts out with Hannah at the Christmas party, dressed up as an elf. They are having a dinner and invited the children at the children's home. Hannah has a bucket of miniature candy canes for the children, and is looking forward to making candy cane cookies with the leftovers. When leaving the party, Hannah and her sisters find a miniature candy cane. . . Hannah also finds a body. I will not say more about the candy cane because I do not want to ruin the book. There are lots of clever clues and fun adventures. The final solving of the mystery is very interesting and clever. And the recipes really look good. On a scale of 1 to 5, a hundred stars would not be enough for Joanne Fluke's part. "The Dangers of Candy Canes" by Laura Levine: While putting a huge, decorative neon candy cane on a roof, the person falls off because a shingle is loose. Was the roofer negligant in making sure the shingle was in place, or did someone deliberately loosen the shingle? Jaine is determined to find out. She goes on some interesting investigative adventures until she finds out who did it. The mystery solving was interesting. This book was fun and funny. I had never read anything by this author before. By itself, this book would definitely have been 5 stars. Actually, a lot more than that. Five stars would not have been enough. "Candy Canes of Christmas Past" by Leslie Meier: Lucy, the main character, reflects on her first Christmas in Tinkers Cove, Maine as a young wife and mother. She makes friends with Miss Tilley and Sue Finch (and others). A glass candy cane makes Miss Tilley remember the death of her mother, which was many years ago. I will not say how the candy cane makes her remember, because I do not want to ruin the book for those who haven't read it. Lucy solves her first mystery that year: she solves the mystery of Miss Tilley's mother's death, even though it was many years ago. I enjoyed the mystery solving; it was really clever. I love the atmosphere of this book. Lucy is taken back in time when she was a struggling new wife and mother. Her little boy, Toby, is sweet and adorable. Their house needs a lot of costly repairs. Even though those times seem hard and bad, those were actually the "good ole days". I know this because I have been reading the Lucy Stone series, and as the series progresses, and the kids get older, and Lucy and her husband are doing better financially, the atmosphere isn't quite as good and sentimental. But this story is more like one of the original books of the seri

Published by Thriftbooks.com User , 15 years ago
I am not the biggest fan of short stories. I want more content to sink my teeth into. However, this book was the exception. I loved it! Hannah was in her usual keen sleuthing mode. I liked how the second short story referred back to Joanne's story and recipes. I am especially thrilled to be introduced to Leslie Meier. I enjoyed her story and I plan to read more of her books.

Published by Thriftbooks.com User , 15 years ago
The holidays are upon us once again; and with them come a large array of holiday stories that will assist us in finding the holiday spirit within. None, however, may do the job as well as Joanne Fluke, Laura Levine, and Leslie Meier's CANDY CANE MURDER. Bringing their trademark mystery, humor, and yummy recipes to the table, this is one collection you'd be crazy to pass up. CANDY CANE MURDER - By: Joanne Fluke - Hannah Swensen, owner and proprietor of Lake Eden, Minnesota's popular business, The Cookie Jar, is looking for a quiet holiday at home, curled up with her badly behaved kitty, Moishe, and a plate or two of her famous Chocolate Candy Cane Cookies. But when she's roped into playing an elf for Lake Eden's annual holiday gala, which includes a visit from Wayne Bergstrom - the owner of Bergstrom's Department Store - in the role of Santa, she realizes that her holiday dreams may be dashed. Bad enough that she's forced to squeeze into a tunic and tights that make her look hippy, but when she discovers a trail of miniature candy canes leading to Wayne's lifeless body at the bottom of a snow bank, Hannah is positive that her holiday shopping, and baking, will certainly be taking a backseat to an impromptu holiday investigation. One that could leave her in the midst of a very silent night. 5 stars. THE DANGERS OF CANDY CANES - By: Laura Levine - Freelance writer, Jaine Austen, would give anything to simply go to sleep and wake up when the holidays are over, but her fish gut-loving kitty, Prozac, and her mounting bills are determined to keep her from indulging in such a luxury. Not to mention her dreaded Christmas trip to Florida to lounge around the pool with her parent's and her size two, bikini-clad cousin - along with her obnoxious family. The fact that Jaine is positive that she doesn't have enough money to buy even the tiniest gifts for her friends and family doesn't help matters much either. That is, until she strikes gold with a new case. When her client at Fiedler On the Roof roofing company is accused of murder, after a wealthy suburbanite takes a tumble off of his newly finished roof, Jaine is convinced that it had more to do with murder, and less to do with carelessness. Stepping into the world of Hysteria Lane, she begins to realize that the world of the wealthy is chockfull of nuts who have homicide on their mind, as well as quite a few hidden secrets that they would do anything to keep private. And if she doesn't watch her back, Jaine just might end up a stiff, even in the sweltering L.A. heat. Of course, if her investigation doesn't do her in, her "girlfriend" Angel, from the mentoring program she recently decided to volunteer with - aptly titled L.A. Girlfriends - is sure to give her a coronary. 5 stars. CANDY CANES OF CHRISTMAS PAST - By: Leslie Meier - As Lucy Stone sits down to enjoy a Christmas with her ever-growing family, she is reminded of the year she first arrived in Tinker's Cove, Maine, some twenty-odd years ago. T

Christmas Can Be Murder

Published by Thriftbooks.com User , 15 years ago
This is a collection of three Christmas mystery novellas written by three great cozy writers. Starring their series sleuths, they stand alone well enough to be entertaining for any cozy fan looking for some light reading in December. Up first is the title story. "Candy Cane Murder" by Joanne Fluke finds Hannah Swenson playing Santa's helper, literally, at the Lake Eden Inn. Wayne Bergstrom, owner of a local department store, is doing his annual good deed playing Santa for the underprivileged kids in the area. But when leaving the party a little while later, she follows a trail of candy canes to find Wayne's body in a snow bank. Who would want Wayne dead? For a novella mystery, this one is fairly complex. Any of Hannah's numerous fans will love this story. It's a cozy Christmas offering and includes 8 cookie recipes, 2 drink recipes, and 2 quiche recipes. Next comes "The Dangers of Candy Canes" by Laura Levine. I'm a fan of Laura's books so was thrilled to find another story starring freelance writer Jaine Austen. When one of Jaine's clients, Seymour Fiedler of Fiedler on the Roof Roofers, is sued for wrongful death, he hires Jaine to put down her pen and solve the crime. Seems that Garth Jankin fell off his recently reroofed house while decorating for his neighborhood's annual Christmas decorating contest. Since Garth had numerous enemies, Jaine quickly decides that the tiles were loosened. But who would do something like that? As with the books, this story is very funny. A sub-plot about Jaine volunteering with a group that mentors underprivileged girls almost slows the story down at times. But in the end this is a fun read. Even though she's a staple of the cozy sub-genre, I have never read Leslie Meier before. I changed that with the third story, "Candy Canes of Christmas Past." This story takes us back in time to the first Christmas that series star Lucy Stone spent in Tinker Cove, Maine. Lucy is trying to deal with her husband's project, fixing up their home. So when town librarian Miss Tilly is nice to Lucy, Lucy looks for some way to repay her new friend. And that's how she begins trying to uncover the circumstances surrounding Miss Tilly's mother's death almost 50 years before. This story is as much about Lucy's struggles to fit into a new town and live in an old house as it is about the mystery. In fact, this was the weakest mystery of the book by far. But I liked the characters and plan to read the first in the series soon. This story includes 2 recipes, bringing the total for the book to 14. If you love cozies and want to book to put you in the Christmas mood, this is the book for you. Pick it up and enjoy today.

Have a Very Scary Christmas

Published by Thriftbooks.com User , 15 years ago
This anthology is the perfect read for all of us who think the Christmas season is just plain murder. Joanne Fluke and Leslie Meier contribute highly entertaining mini-mysteries, but my favorite part of the collection was--with all due respect to Publishers Weekly--Laura Levine's latest Jaine Austen adventure. "The Dangers of Candy Canes" was hardly "skimpy," but involving, fast-paced, and moving, without being overly sentimental. All of these stories, however, are recommended for anyone wishing to try original twists on the standard murder mystery. It would be interesting to see the authors follow this up with further holiday-themed stories.
Trustpilot
Copyright © 2022 Thriftbooks.com Terms of Use | Privacy Policy | Do Not Sell My Personal Information | Cookie Preferences | Accessibility Statement
ThriftBooks® and the ThriftBooks® logo are registered trademarks of Thrift Books Global, LLC