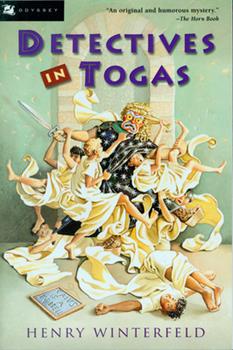 (Book #1 in the Detectives in Togas Series)

In these two delightful history-mysteries, seven boys in Ancient Rome solve strange crimes . . . thanks to some help from their cranky teacher, a little bit of logic, and a lot of amusing misadventure. Yes, Rufus wrote CAIUS IS A DUMBBELL on his tablet at school, but no, he did not break into the schoolroom, did not tie up his teacher, and certainly did not paint his slur about Caius on the Temple of Minerva (even if it is in Rufus's own handwriting)...

Published by Thriftbooks.com User , 18 years ago
This book is hilarious and one of the greatest mysteries ever written. When I read a mysery I usually at least have a guess of how it ends, but i couldn't even immagine the ending of this book.

Review of Detectives in Togas -by Sean Cook

Published by Thriftbooks.com User , 21 years ago
This book is a comical mystery about seven rich boys who live in ancient Rome and go to the Xanthos school for boys. Cauis isn't very bright, Rufus is the class clown, Aucius is a hard worker, Flavius is the slow boy, Antonius is the fast boy, Publius is the poorest one, and Julius is the boy with the best ideas. In the beginning of the book, Cauis and Rufus pick a fight with each other. Rufus, the class clown wrote, "Cauis is a dumbbell" on a writing tablet. The teacher cruelly punishes Rufus and kicks him out of school. The next day, when the teacher didn't show up for school, they went to his house and found him manacled. Everything in his house was demolished. The same day, another crime was committed. Graffiti was found on the temple wall that was dedicated to Cauis' father, Senator Vinivius...I think this was a great book with an unbelievable ending. The ending was so awesome because I never saw it coming.

A favorite from my childhood for my son.

Published by Thriftbooks.com User , 23 years ago
I searched for this book for months in used book stores around town before it occured to me to look here. Regardless, I read this thirty years ago and recently to my 5 year-old son Felipe. As I have read much Greek and Roman mythology to him I had been at a loss trying to relate ancient Rome as a living city to him. He understands the ruins and the appearances thereof from Nat'l Geographic . . . . This book filled him with the images of the ancient city as a regular place for kids and people-something different than the decadent structures we see today. My fondest recollections of this book from my childhood were picturing the images of the academy the boys attended, Caius' home, the temple and other places in Rome. Until I studied Western Civ and read more sophisticated literature, my clearest and most descriptive pictures of Rome were somehow related to this book whose title I only recently recalled. A kind of archaic Hardy Boys thing that was really quite fun! to read.

A great mix of fun and mystery

Published by Thriftbooks.com User , 24 years ago
My fifth grade class just read this book for our reading group. It was amazing! The suspense and the humor added just the right touch to this woderful book. I won't give too much away because it would ruin yhe suspense. Seven young Romans attend the Xanthos school. Two students, Rufus and Caius, get into a fight over a tablet reading 'Caius is a Dumbell' that Rufus wrote. The next day in red paint, the same thing is written on a temple dedicated to the Emperor, who is Caius' father! But rufus is innocent. I really enjoyed this book, and you will too! Enjoy!

This is one of the best books I've ever read!

Published by Thriftbooks.com User , 24 years ago
Detectives in Togas is a great book! This book starts out with a big practical joke. Detectives in Togas is about a boy named Rufus who finds out a deep dark secret. He is thrown in jail where he is starved and beaten. It's up to Rufus' friends to crack the case and get Rufus out of jail. The boys' teacher, Xantippus, is assaulted. When the boys scour the house for clues, they find a gold chain, which must have belonged to the assaulter. The boys take the chain to Lukos, the seer. When the boys show it to him, he goes into a rage and throws snakes at the boys. When the boys sneak back into Lukos' chamber, they to find out the deadly secret themselves. Do the boys get Rufus out of jail? You'll just have to read this excellent book!
Trustpilot
Copyright © 2022 Thriftbooks.com Terms of Use | Privacy Policy | Do Not Sell My Personal Information | Accessibility Statement
ThriftBooks® and the ThriftBooks® logo are registered trademarks of Thrift Books Global, LLC