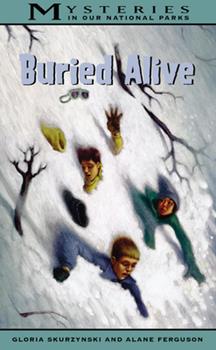 (Book #12 in the Mysteries in Our National Parks Series)

This description may be from another edition of this product. Who was that man in the Park Service uniform who brought Jack and Ashley Landon into the wilds of Alaska's Denali National Park along with their friend Nicky Milano? Whoever he was, he has given them...

Published by Thriftbooks.com User , 15 years ago
I thought this book book was a good book. It probably is one of the best in the series. It is heart pounding suspenseful,thrilling and full of action. It was heart pounding and suspenseful because when the avalanche comes they get freaked. This book is about Jack and Ashley going Alaska's Denali National Park and Reserve to investigate the death of two male wolverines. They bring a boy named Nickey Milano and Jack gets suspicious about him when Nickey says that he is crazy and they don't know what they are dealing with. They get to their cabin and the next mourning Jack and Ashley go out in the snow to see a moose but Nickey finds them and they find out that his dad is in the CIA but jack knows he is lying. They get to Denali and a man named Chaz has agreed to take them on a dog sled ride to wonder lake while Olivia is studying the dead wolverines. They next thing the Landon kids and Nickey know the is they see Chaz riding away leaving them stranded in the middle of Alaska's wilderness. Suddenly they hear a roaring sound what is it AVALANCH! Can the the three of them escape the roaring mass of snow or will they be buried alive. I recommend this book to a 8-13 year old or someone who likes mystery books.

Published by Thriftbooks.com User , 17 years ago
This National Park Mystery is different from all the other ones. The story actually spends more time talking about the foster kid, Nicky Milano. If you enjoy the National Park Mysteries, and like the story about the kids verses the mystery, then this book is for you. It just gives so much more detail. Remember, there are eleven other books before this one.The thing with this book is that it is so suspenseful to see if the Landon kids and Nicky Milano will survive. (...). That's when Nicky stops lying, and tells Jack and Ashley the real story of his dangerous, hidden life, and his father, an ex-criminal.I liked this book because I think it had more emotion in it. This story's foster kid really bonded with Jack and Ashley. The only thing with this last book is that I think the author rushed it. I mean, the bad guy goes right out and says he did it. Where's the mystery? Other than that, it was great. So read all the other Mysteries in our National Parks.
Copyright © 2020 Thriftbooks.com Terms of Use | Privacy Policy | Do Not Sell My Personal Information | Accessibility Statement
ThriftBooks® and the ThriftBooks® logo are registered trademarks of Thrift Books Global, LLC