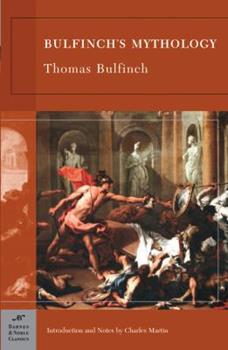 &&LIBulfinch''s Mythology&&L/I, by &&LBThomas Bulfinch&&L/B, is part of the&&LIBarnes & Noble Classics&&L/I&&LI &&L/Iseries, which offers quality editions at affordable prices to the student and the general reader, including new scholarship, thoughtful design, and pages of carefully crafted extras. Here are some of the remarkable features of &&LIBarnes & Noble Classics&&L/I: New introductions commissioned from today''s top writers and scholars Biographies...

A Must-Have for Every Home Library

Published by Thriftbooks.com User , 12 years ago
This is a reference work that belongs in every home, especially if you have kids. The width & breadth of stories contained here will astound even those who think they are well-versed in mythology. Everything from the Greek & Roman gods to King Arthur is included in this book, along w/lesser known stories that are just as interesting in their own right. While it may be too sophisticated for elementary readers, it is just right for 11-13 y.o. kids to jump into to supplement their Harry Potter or Star Wars passions. Even curious adults will find something they didn't know before. Makes a great gift for all ages!!

I never knew how interesting this would be

Published by Thriftbooks.com User , 12 years ago
I bought this book so that I could understand the symbology in my Kabbalah studies. I ended up reading the whole book front to back because the stories are so interesting. I also learned the symbolism I was wanting and much more. I used this book to help me with The Shining Paths

Published by Thriftbooks.com User , 18 years ago
This new edition of the classic Bulfinch's Mythology is excellent. It has retained all of Bulfinch's old texts and introductions to myths and their histories, but it has also added some new introductory material. This material, much having to do with Bulfinch's own life and education helps to bring light into the context for which Bulfinch was writing. For example, did you know that Bulfinch originally began writing mythology pieces for magazine entertainment? There is also much information in the new introductions about Bulfinch's education and the place that he held (or rather, didn't hold) within Boston's then extremely rigid social strata. The editor also provides an interesting look at why Bulfinch told the myths in the way he did and compares the sources that Bulfinch used to those of his contemporaries (Hawthorne, for example). It really is very interesting reading.Of course, this edition of Bulfinch's mythology still contains all of the wonderful myths that our society has come to know through this book, along with Bulfinch's original introductions to each chapter. The book is large and heavy, therefore not a great traveling companion. Still, it more than makes up for it with content. If you keep this book out on your shelf and read a small bit of myth every day, you will never be bored or lack for reading material again.

Published by Thriftbooks.com User , 20 years ago
Bulfinch does a great job of retelling the classic Greek/Roman myths of antiquity as well as the myths of Old Europe including, among others, Arthur, Charlemange, Orlando, and Thor. One part that stands out is the Mabinogeon which (and this is noted on page 561 of the Modern Library edition) has a Thousand and One Nights fell to it. One part that appeared to not fit into the book at all was Chapter 37 of The Age of Fable, which hastily describes a portion of Eastern Mythology. Although this section has no true faults with the information, one gets the sense that Bulfinch quickly threw the myths together and since he didn't have room for them anywhere else he put them in this chapter. Although it does not take away from the quality of the book it might have been better had Bulfinch chosen either to elaborate slightly on the myths or to not include them altogether. However, for an introduction to classical mythology for the reader who is having trouble understanding Byron or Milton or Shakespeare or a hundred other classical European and American writers this book is a godsend. Bulfinch tailored this book to just this kind of reader. At times it may seem a bit dry, but Bulfinch intended his work to be used as a reference mainly (which is why he included a great index in the back of The Age of Fable). For those readers who are interested in mythology as an end unto itself, I recommend this work as your main road map through this sometimes confusing trail. Robert Graves and Edith Hamilton's works are good also but in my opinion Bulfinch outdoes both of them. From here you will definitely want to look at the Madrus and Mathers 4 vol. edition of the Thousand Nights and One Night (that is the full title) if you liked the Eastern feel that you get in Chapter 37 in the Age of Fable and the Mabinogeon. If you are interested in the Greek and Roman myths mainly go straight to the horses mouth and read Ovid, Homer, and Virgil. For more European mythology, Malory's Le Morte D'Arthur is indespensable. I recommend Penguin's two volume edition but with some hesitation, as the annotation is a bit strange, making you flip back and forth between the front of the book and the back of the book. However, Penguin prints out almost every major mythological story, ranging from the Medieval French Romances to the Icelandic Sagas. As stated before, let Bulfinch lead you through this mass of myths, he knows what he's doing.

One of the greatest mind expanders ever assembled!

Published by Thriftbooks.com User , 23 years ago
I found Bulfinch's in our school library when I was in the 4th grade, eleven years old. My mother had to go before the school board to gain permission for me to check it out. Even then, I was not allowed to have the book at school! The pictures and stories, in the board's mind, were too titillating for the other 4th graders. Thank God for my mother. I found a world I never knew existed, full of fantasy and beauty. The strife and conniving natures of both gods and mortals captivated me. The stories of the Greek and Roman myths were my favorites, and cultivated in me a love for both cultures. And as for the titillating parts, well, I promise you that General Hospital is far worse for 4th graders than Bulfinch's will ever be.
Copyright © 2020 Thriftbooks.com Terms of Use | Privacy Policy | Do Not Sell My Personal Information | Accessibility Statement
ThriftBooks® and the ThriftBooks® logo are registered trademarks of Thrift Books Global, LLC