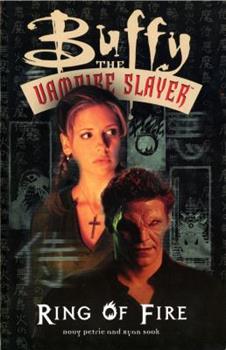 From the writer of the television series and the most talked about artist on the comics series comes an intricate and explosive graphic novel. Set in Season Two of Buffy the Vampire Slayer, the story begins just after Angel killed Jenny Calendar. Giles is a wreck, and Buffy's not much better, knowing the man she loves is a homicidal maniac. But when the armor of a samurai demon is stolen from a cargo ship, a new battle is pitched to determine who...

Published by Thriftbooks.com User , 14 years ago
"Ring of Fire" is a graphic novel, written by Doug Petrie who has written notable episodes for "Buffy the Vampire Slayer", such as the fan-favorite "Fool for Love." This story takes place in Season Two of Buffy, right after "Passion." I was surprised by "Ring of Fire." When I began to read it, I was under the false assumption that Christopher Golden (a writer for the comics and books, who hasn't convinced me of his talent yet) had written it. I was immediately blown away by how the dialogue captured the personalities of each character as well as the tone of the show perfectly. Wondering how Christopher Golden had suddenly become such a good writer, I flipped to the index and saw that he, of course, hadn't written it. Doug Petrie, a writer for the actual television series, had. Well, let me say this: If this is his first venture into comics, he is a natural. The pacing is perfect, and the writing truly brings me back to what I feel was the best period of the show: The Angelus arc. The story is a simple "stop demon from killing people" kind of thing, but the dialogue and the twists in the plot, such as the introduction of Kendra into the mix, are what sustains the story. However, speaking of Kendra, I couldn't help but note how jarringly out of character she is. She's speaking like Faith, which is very non-Kendra-esque. No matter; it doesn't take away from my enjoyment of the story. Petrie manages to insert this tale into a tight spot in the Second Season that craftily manages to develop the characters without contradicting anything that happened subsequent to the events of the story. This graphic novel is actually better than a few of the actual television episodes that followed "Passion" (ex. "Go Fish", "Killed By Death"), as it dealed with certain aspects that weren't explicitly addressed on the television show. "Ryan Sook." The name of this artist when said to a fan of "Buffy the Vampire Slayer" either causes sneering or smiling. After seeing his art in the "Spike and Dru" one-shots, I found myself more among the sneering crowd. His depiction of the characters was crude and often made their faces hideous, though I did note that he had a knack for complex backgrounds. However, his art in "Ring of Fire" wasn't nearly as bad as in the aforementioned one-shots. He often got dead-on likenesses of all the major characters. There were a few major slip-ups (he can't draw vamped out faces at all), but for the most part the art ranged from satisfactory to good. His art never got in the way of the storytelling, but actually complimented it this time around. *NOTE: Hold out on buying this. It's much more practical just to pick up Buffy the Vampire Slayer Omnibus, Vol. 2, which reprints this as well as six other Buffy comic stories in one volume* 9/10

What more could you ask for?

Published by Thriftbooks.com User , 19 years ago
Maybe I should just list the elements that BTVS fans love that Ring of Fire contains. We have:1. Spike and Angelus ready to rip each other's throats out fighting over Dru2.Giles being pushed too far and going into Ripper mode3. Jenny Calandar's spirit4. Spike making a Sex Pistols reference5. a temporary alliance between two characters who hate each other's guts6. Kenda showing up, kicking [behind], and taking namesThis is probably one of the top, if not THE top, Buffy graphic novels out there. It takes place during those golden months in late Season 2 when Angel was bad and moved into the mansion with Dru and a jealous, wheelchair-bound (or is he?) Spike.The illustration by Sook is the best-- he captures Buffy's face, all huge sad eyes haunted by the knowledge she's inadvertantly turned her soulmate into her worst enemy, perfectly. There at least one VERY bone-chilling drawing of Angelus in a graveyard, momenarily caught by some poor b-stard of security guard's flashlight, with very bad timing.Also, Doug Petrie wrote the text, and it shows. This could have been a actual episode story arc (only now it can never be as it involves the second season trio of Spike, Dru, and Angelus). There's a bonus of several pages of sketches and conceptions by the illustrator at the end, including many of the best drawings of a brokenhearted Buffy and even a mosh-pit Spike. If you're a BTVS fan, and want to invest in a graphic novel, this is the one to go for...the most inventive, best-written, truest to the series and the second season yet, and stunningly inked.If you're an adult Buffy fan but maybe feel slightly geeky starting in on the graphic novels (I was worried the clerk might look at it and ask, 'uh aren't you a little old for this?'), just buy this one and you'll be both delighted and proud of yourself that you did.Things are about to get VERY interesting....

Published by Thriftbooks.com User , 20 years ago
Some people may not like Ryan Sook's style of drawing but I think it really fits the story and manages to capture various aspects of the characters. This trade has everyone -- Angelus, Dru, Spike, Kendra, the ghost of Ms. Calendar. . .I really really don't want to give away any of the story, but it really is quite good at dealing with Giles' reactions and feelings. Also, Petrie really understands what is cool about BTVS -- there's a part where Joyce offers the Scoobies some lemonade when they're in the middle of interrogating someone in the basement, how cool is that? This really is a must buy.

Superbly enhanced with the impressive artwork

Published by Thriftbooks.com User , 21 years ago
Buffy The Vampire Slayer: Ring Of Fire takes place at a time when Angel, the vampire with a soul, had reverted to his murderous ways because when he and Buffy consummated their love and he felt true happiness, the gypsy curse kicked in to thrust him back into pure vampiric evil. The first to die was Watcher Rupert Giles' friend, Jenny Calendar. Now the corpse of a demonic samurai has come across the sea to Sunnydale, promising ultimate power to whoever revives it. An apocalypse is again brewing over the Hellmouth, but this time Angel and Buffy are on opposite sides! Doug Petrie's riveting story of love and monsters that has won a massive following for his television series has brought those same writing skills to the graphic novel format, superbly enhanced with the impressive artwork of Ryan Sook. Buffy The Vampire Slayer: Ring Of Fire is a "must" for the legions of Buffy and Angel fans!

Published by Thriftbooks.com User , 21 years ago
Despite the cover and the back cover, the main characters of this story is Buffy and Drusilla with Angelus and Spike backing up their main squeeze. Dru's new demon boyfriend is consolidating power and decided to show his "affection" by eliminating the Slayer. Which places Angelus and Spike as third wheels - either support Dru by destroying Buffy or eliminate their rival for Dru's attention. A difficult decision for Angelus who wants that joy for himself. So if you were looking for the major confrontation between Angelus and Buffy, buy a copy of the video. But if you're looking for a good story within the time period that most of the writers of the books avidly avoid, pick this up. It's an excellent addition to the Buffy Universe and Sook's artwork is getting better and better
Trustpilot
Copyright © 2022 Thriftbooks.com Terms of Use | Privacy Policy | Do Not Sell My Personal Information | Accessibility Statement
ThriftBooks® and the ThriftBooks® logo are registered trademarks of Thrift Books Global, LLC