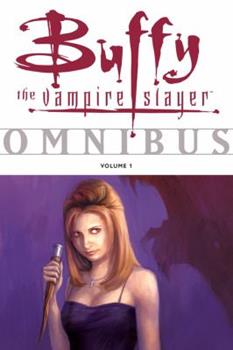 (Book #1 in the Buffy the Vampire Slayer Omnibus Series)

The definitive comics collection of all things Buffy starts here. This first massive volume begins at the beginning - The Origin, a faithful adaptation of creator Joss Whedon's original screenplay for the film that started it all. The newly-chosen slayer's road to Sunnydale continues in Viva Las Buffy and Slayer, Interrupted. Next, high school, the Scoobies and an English librarian lead the way into Season One continuity. Plus, The Goon creator Eric...

Published by Thriftbooks.com User , 5 years ago
Pretty satisfied with graphic novel of Buffy the vampire slayer cause set of graphic novels in one book an tells origin of slayer.

SO much better than season 8!

Published by Thriftbooks.com User , 13 years ago
This is so much better than the Season 8 comics, I can't wait to see the next volumes. It's actually got more plot and more said and more substance. It's interesting with better storylines, filling in the blanks we always wanted filled in. I loved seeing Angel (and Whistler!), Wesley, Giles, and whoa, Giles' Dad! Even the artwork was infinitely better, it wasn't like the other ones where it was all about the skin. This was more sophisticated and just...awesome. Spike's story was kind of boring, as was the Vegas part, but after that, everything picked up and it was stuff we actually cared about. This is a must-read for Buffy-fans, it's stuff that was mentioned in passing in the show but never elaborated on, until this. I'm so glad I found it!

Great way to get the early Buffy history!

Published by Thriftbooks.com User , 13 years ago
With a faithful adaptation of Joss Whedon's ORIGINAL screenplay for Buffy the Vampire Slayer (the movie), a story about the immediate after effects where Buffy runs away to Las Vegas, as well as giving us the story about her sojourn in the mental institution, we're finally given a good glimpse into what forces shaped the Buffy we grew to know and love in the first season of the series. Of course, we're also treated to a cute story featuring Dawn (because although she wasn't *really* there at the time, Buffy REMEMBERED her as being there), and we see Spike and Dru at the world's fair in 1933. All in all, a great collection of stories; a bit pricey, perhaps, but well worth the time to read - and practically a must-have for any serious B:tVS fan.

If you are enjoying "Season 8" of "BtVs," maybe you would be interested in "Season 0"

Published by Thriftbooks.com User , 14 years ago
I did not collect the first "Buffy the Vampire Slayer" comic book series mainly because I did not cotton to the artwork. I picked up the first issue but that was it, although I did pick up some of the associated minis-series. So I got "The Origin" when it first came out because I liked the idea of redoing the movie script to better incorporate it into the mythos created by the television series, as well as "Willow & Tara Wilderness," Joss Whedon's "Fray," and "Tales of the Vampires." More recently I bought the "False Memories" trade paperback collection because it sounded like it might be similar to a "BtVS" novel that I tried writing once upon a time. But with Joss Whedon writing and serving as "executive producer" for "Buffy the Vampire Slayer Season 8" (and now gearing up for "Season 6" of "Angel"), Dark Horse decided to reprint a definitive collection of the first "BtVS" comic series and its assorted spin-offs. Initially I was sitting on the fence with regards to even checking out the series, but then I discovered that this omnibus series is organized chronologically following the timeline of the television series. In other words, the stories in "Buffy the Vampire Slayer Omnibus, Volume 1" take place before the show's first season. That, I decided, meant Volume 1 was at least worth a look and then I can see what I have missed: "All's Fair" ("Spike & Dru" #3), script by Christopher Golden, pencils by Eric Powell, and inks by Drew Geraci & Keith Barnett. This is a Spike & Dru story where the love vamps are checking out the Chicago World's Fair of 1933, where a scientist has tapped into energy from a demon dimension. Meanwhile, there are people who want to make Spike pay for killing his first Slayer during the Boxer Rebellion. Those story lines are interesting on their own, but putting them together does not up the ante. There is a neat scene where Spike and Dru simultaneously put the bite on a pair of young lovers kissing, but sharing pages ends up hurting the two main plot lines (4 Stakes). "Buffy: The Origin," adapted from Whedon's original screenplay by Dan Brereton & Golden, pencils by Joe Bennett, and inks by Rick Ketcham. What if the original movie version of "BtVS" had been filmed the way Joss wrote it and not turned into a camp comedy by the director? This three-part comic book story gives fans an idea of what might have been. Beyond making Buffy look like Sarah Michelle Gellar, it is cutting all that campiness that makes this worth reading and upgrading the supporting cast: for example, Merrick looks like a cross between Donald Sutherland and Richard Riehle, the actors who played the character in the movie and TV series respectively. Not great, but I like it way more than the movie (4.5 Stakes). "Viva Las Buffy!" (#51-54), script by Scott Lobdell & Fabian Nicieza, pencils by Cliff Richards, and inks by Will Conrad. What I like about this one is that beyond the whole idea of a road trip to Las Vegas (th

If you loved Buffy then this is a must buy!!!

Published by Thriftbooks.com User , 14 years ago
Big buffy fan? or just starting with buffy? then this book is for you. The art is amazing, same with the dialogue. It's a true collectors item.

a must for any Buffy fan!

Published by Thriftbooks.com User , 14 years ago
The Slayer Omnibus collects previously published comic book stories that are set before Season 1 of Buffy the Vampire Slayer. Its an enjoyable read, especially for any Buffy fan. We get some insight into Giles/Ripper, learn a little about Buffy's "lost days" in Las Vegas with her then boy toy and witness Angel's stalkage of the slayer. And then there's Dawn's story with Hoopy the Bear - gotta love it!
Copyright © 2022 Thriftbooks.com Terms of Use | Privacy Policy | Do Not Sell My Personal Information | Accessibility Statement
ThriftBooks® and the ThriftBooks® logo are registered trademarks of Thrift Books Global, LLC