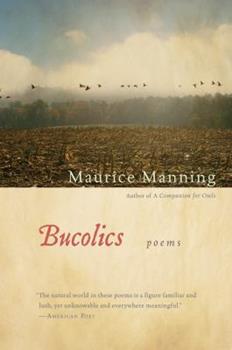 Untitled and unpunctuated, the seventy poems in this acclaimed collection seem to cascade from one page to another. Maurice Manning extolls the virtues of nature and its many gifts, and finds deep gratitude for the mysterious hand that created it all. that bare branch that branch made black by the rain the silver raindrop hanging from the black branch Boss I like that black branch I like that shiny raindrop Boss tell me if I'm wrong but it makes me...

Published by Thriftbooks.com User , 14 years ago
Read all three books by Maurice Manning. And try to see him read if you get the chance. He's a terrific poet, one the very best writing today.

Sensible & Intelligible Questioning of the Divine

Published by Thriftbooks.com User , 14 years ago
What I like about Bucolics is the accessibility of the poems. I can understand them at a first reading, but have re-read all of them. They remind me of what I thought about asking the Divine, but never set it down in writing. Manning does that for us. Plainly and cleverly. I call this sensible poetry. The kind that high school and college students should be introduced to, because of the images, word play and themes. The poems reminded me of my reading of the Classics. How Ovid speaks to the gods in Metamorphoses. But these are mostly nature centered so akin to Virgil's Georgics. Manning's near irreverence can be misleading, I think he has profound faith. My kind of faith. Not ranting fire and brimstone, but he talks to the Boss from the respectful distance of beloved child. The cover is attractive and I have purchased numerous copies as gifts.

Ought to win the Pulitizer Prize- Pure Poetry

Published by Thriftbooks.com User , 14 years ago
There is no doubt about it, this collection of poems is far and away the most unusual collection I have read. Unpunctuated, unbound by the restrictions and conventions of language and thought, these poems pay homage to the natural world and credit to the Maker.

I'm The Boss Card In Your Hand

Published by Thriftbooks.com User , 15 years ago
In his third volume of poems, Maurice Manning returns to the more lyric Appalachian language that haunted his first book, Lawrence Booth's Book of Visions (Yale Series of Younger Poets), to create a masterpiece, at once Southern, Appalachian, American, and English. Drawing on the bucolic tradition in poetry, Manning fashions a dialogue between a unnamed country boy and his "Boss," a figure construed variously as overseer, landlord, and Lord God. The language of these poems, which may be read individually or as a long sequence, moves effortlessly between the devotional and demotic, producing an almost hypnotic and always musical effect. This is one of the best books of poems, not only of this year but of many recent years, an essential purchase for anyone who loves poetry and for anyone who is interested in language of any kind. A wonderful, beautiful book.

The "Boss" Poems: A Fine Collection

Published by Thriftbooks.com User , 15 years ago
Maurice Manning's BUCOLICS is fine collection of poems. You'll find yourself strangely drawn into the beautiful, rough, and -- to many folks at least -- familiar farming world of the narrator. Professor Manning read from this collection at the Alabama Writers Symposium in Monroeville (the south Alabama hometown of Harper Lee and Truman Capote) this spring, and the "Boss" poems of BUCOLICS really came to life for many of us.
Trustpilot
Copyright © 2022 Thriftbooks.com Terms of Use | Privacy Policy | Do Not Sell My Personal Information | Accessibility Statement
ThriftBooks® and the ThriftBooks® logo are registered trademarks of Thrift Books Global, LLC