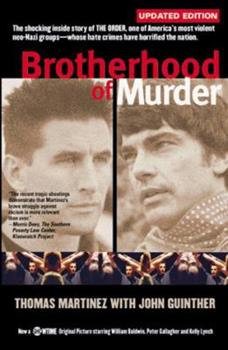 by John Guinther and Thomas Martinez

Now a SHOWTIME Original Motion Picture starring William Baldwin, Kelly Lynch, and Peter Gallagher, Brotherhood of Murder chronicles the dramatic true story of Tom Martinez, a man who was undercover for the FBI in one of America's most dangerous white supremist terrorist groups. Given the recent tragic hate-crime shootings, this classic non-fiction book is more relevant than ever. Growing up poor, white and angry on the mean streets of Philadelphia,...

The rise, fall, and redemption of a man.

Published by Thriftbooks.com User , 21 years ago
One word to describe this book? "Amazing."Tom Martinez gives an inside look of the far-right, from his fundraising days with the National Alliance to how he helped the FBI bring down Bob Mathews, leader of the Order.Besides learning the inner workings of such organizations, what amazed me about the book is Martinez's personal experiences. For example, his shattering the myth that hate and racism is learned at home. Martinez makes it clear that hate is a form of fear...in his case, his fear of black gang members in his high school led to his support of David Duke and a downward spiral from there. Not once did his parents ever utter a derogatory word about minorities, Martinez says.Martinez could have easily written this book in a spiteful manner, blaming his felony conviction for passing bad money on the members of the Order. But he doesn't. Martinez takes full responsibility for his actions and even has compassion for some of the Order members who he brought to justice...even Bob Mathews who was killed in an FBI shootout.Unfortunately, I missed the Showtime movie based on this book...but I recently won a copy of it on eBay and cannot wait until it arrives!

A detailed account of one man's career in the hate movement

Published by Thriftbooks.com User , 22 years ago
This book could be read in conjunction with Kerry Noble's Tabernacle of Hate. It is less of an emotional tale of fall and redemption than Noble's book, but it is gripping nonetheless. Martinez tells in detail how he was slowly drawn into The Order (the most organized and violently active neo-Nazi group in American history) and convinced of the importance of its cause by the now-dead leader, Robert Matthews. The book shows how the Order eventually collapsed in on itself due to treachery within its own ranks. (Like all organized pro-white terroristic groups.) It is a good book for gathering information on how the groups operate, where their thinking (or lack thereof) is headed. It's a good reference for preparing for the coming battle in which the non-Aryans will rise up and exterminate all Neo-Nazis, (the real result of the future racial war that Nazis are dreaming of).

One of the Most Important Books I've Ever Read

Published by Thriftbooks.com User , 22 years ago
Tom Martinez' story is terrifying and uplifting. It's frightening to learn how easy it can be for someone to become a neo-Nazi. It's exalting to see the same person change. Martinez is one of the bravest characters you'll ever meet in the pages of a book, and he's real, not fiction. I bought copies for every teenager I know.
Trustpilot
Copyright © 2022 Thriftbooks.com Terms of Use | Privacy Policy | Do Not Sell My Personal Information | Accessibility Statement
ThriftBooks® and the ThriftBooks® logo are registered trademarks of Thrift Books Global, LLC