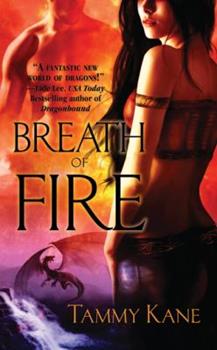 A cynical Mattaen monk meets the ultimate temptation: a passionate female dragonrider who claims him as her mate. This description may be from another edition of this product.

Published by Thriftbooks.com User , 13 years ago
I really enjoyed this book and am soooo glad I read it. It is very original. If anyone has read Anne McCaffrey's Dragon riders series and wanted more romance in her books, you will love this book, too! But I do this author a disservice, her book has dragons but she has a different mythology and world that are fascinating. I loved the strong hero and heroine! Both were equally interesting and the more I read about them the more they became alive for me. Usually one of the main characters is has 'less' of a personality but not so in this novel, bothe were equally matched. Plus Tammy Kane has a few unexpected suprises in her story that kept me turning the pages in rapidly to find out what exactly was going on! Here is a brief synopsis: Karl is a Mattaen Initiate trained as a warrior but destined to give up worldy pleasures in search of knowledge. He is on his final journey before taking his vows but along the way he discovers a primative village which believes in dragons. And to his horror they are offering a poor, terrified virgin sacfice. Appalled by these backward people and to save the young female from being sacrificed he offers himself instead, knowing the are no dragons. But to his suprise a dragon appears and even more startling a beautiful dragonslayer. She dispatches the dragon but demands Karl as her reward... Well, you have to read the rest to find out more. This was such an enjoyable book. Everything was wonderful, the story, the main characters, the villian was extra evil. Fantastic fantasy read!!

Published by Thriftbooks.com User , 13 years ago
This book is a nice mixture of romance, political intrigue, and ethical issues. It does a great job making the paranormal realistic; not just instilling superpowers. Hero and heroine are both strong and the story is written in both perspectives.

Published by Thriftbooks.com User , 13 years ago
I took a chance on this author and boy, it kept me up. Loved the main male character...Yummy and what a man should be. Very imagination

Published by Thriftbooks.com User , 13 years ago
As a Mattaen Initiate, Karl is trained to be a great warrior. When he reached the village filled with superstitious peasants, he scorns the irrational villagers proclaiming they are murderers; while their leaders defend their actions by claiming a dragon demanded and expected a virginal sacrifices or else. He was not volunteering when they tied him to the rock as their virginal sacrifice. Unchained he could not defeat a dragon if they existed, but chained, he fears if true he is dead. Elera Daughter of Shane kills the dragon and charges as her price, the virgin sacrifice for a night to do what she wants with him. Her virgin prize Karl wants to say no, but she entices him to crave her. When she steals a kiss, he can no longer adhere to his vow of chastity as the Mattaen Initiate Brotherhood requires. She takes him and he wants her to take him again as he desires more, but by doing so he feels guilt for betraying his Brothers who raised him. The key to this romantic fantasy is the world of Kane seems real especially the paranormal. The story line is fast-paced form the onset when a mocking Karl becomes the sacrifice and never slows until the final spin though in between there are world building, romance and plenty of action. Tammy Kane breathes new fire into the dragon mythos with a strong opening act. Harriet Klausner
Trustpilot
Copyright © 2022 Thriftbooks.com Terms of Use | Privacy Policy | Do Not Sell or Share My Personal Information | Accessibility Statement
ThriftBooks® and the ThriftBooks® logo are registered trademarks of Thrift Books Global, LLC