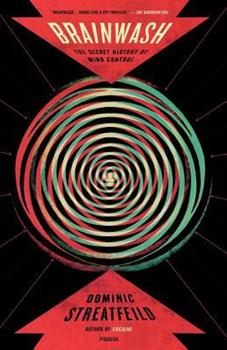 Behind the front lines of every war in the world, prisoners are forced to sit for interrogation: manipulated, coerced, and sometimes tortured--often without ever being touched. Brainwash is a history of the methods intended to destroy and reconstruct the minds of captives, to extract information, convert dissidents, and lead peaceful men to kill and be killed. With access to formerly classified documentation and interviews from the CIA, U.S. Army,...

Good for the older historical info on drug experimentation......

Published by Thriftbooks.com User , 12 years ago
Very good at covering the older information on drug, hypnosis, and group mind control..... Lack explaining in the newer more subtle methods for conditioning individuals (NLP) and the combined uses with the new technologies used for mind control.... Controlling the Human Mind: The Technologies of Political Control or Tools for Peak Performance Mobbing: Emotional Abuse in the American Workplace

Published by Thriftbooks.com User , 13 years ago
This is great stuff. First of all, mind control's a fascinating topic. (In fact, I've always been surprised there hasn't been more out there on it.) Second, the author seem to cover the whole gamut - the Moscow show trials of the 30s, sensory deprivation, drugs, cults, crazy psychiatrists, subliminal messages, satanic ritual abuse, Guantanamo ... you name it. (If there was any one theme typing it together, it would have to the use of mind control by intelligence services.) The author is also a fine writer. Most of the stories read like a good suspense novel. He also seems to be quite a good interviewer, giving the reader a very good feel for the people involved (when they're available). That said, I actually think the book was a little too journalistic for me. A lot of the chapters focus around a single story, with a very strong emphasis on the characters involved. The chapter on subliminal messages, for example, is all about 2 teenagers who commit suicide after listening to a death metal album - and the resulting trials that ensue. Another chapter, on what the British did to some IRA prisoners, talked very little about what was done and what impact it had, and more on how it all played out in the news. Overall, I would have liked a lot more on technique, theory, psychology, etc. In this regard, I found it rather ironic that the author used the Eleanor Roosevelt quote that "Great minds discuss ideas. Average minds discuss events. Small minds discuss people." Another annoying tic of the author's was his attempt to shoehorn journalistic balance into every story. In other words, no matter how crazy the topic and the people involved, the author felt compelled to emphasize the two sides of the story. For example, he seems to have no problem equating religious cults like the Moonies and the Family with the deprogrammers and anti-cult organizations. Same deal with the Satanists.

Published by Thriftbooks.com User , 14 years ago
Dominic Streatfeild has done an incredible amount of research and conducted numerous interviews with those who used the methods he writes about and also the victims of such methods. The author does not insist on his point of view, but compares and contrasts available information and leaves the room for the readers to come up with their own conclusions. This is a must-read book for anyone interested in the history of mind control and the current use of it in Iraq, Afghanistan, Guantanamo Bay, and elsewhere!

Engaging read about a disturbing subject

Published by Thriftbooks.com User , 14 years ago
I enjoyed the author's writing style, in-depth coverage, and exclusive interviews. The interviews are invaluable because they occur decades after some of the events and the people involved are more forthcoming. Everything related to mind control is here: the CIA and drugs, subliminal messages, cults, the Judas Priest trial, and so much more that you haven't heard about before. The book is frightening and a good example of "truth is stranger than fiction". The guys in "1984" are nothing compared to some of these doctors. The fact that some of these experiments were done on unwilling people is even more disturbing. "Hey guys, let's dose this guy with 50x the normal dose of LSD and not tell him!" Or the sleep experiments where they forced people to sleep for months at a time using drugs, waking them up for ECT "therapy". The final chapter (worth the cost alone) is a graphic step-by-step of how the West is interrogating terrorists in Gitmo and elsewhere. Highly readable and recommended.
Trustpilot
Copyright © 2022 Thriftbooks.com Terms of Use | Privacy Policy | Do Not Sell My Personal Information | Accessibility Statement
ThriftBooks® and the ThriftBooks® logo are registered trademarks of Thrift Books Global, LLC