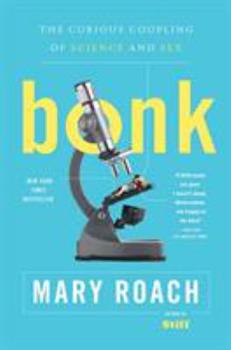 Bonk: The Curious Coupling of Science and Sex

In ?Bonk, ?the best-selling author of Stiff turns her outrageous curiosity and insight on the most alluring scientific subject of all: sex. Can a person think herself to orgasm? Why doesn't Viagra help women-or, for that matter, pandas? Can a dead man get an erection? Is vaginal orgasm a myth? Mary Roach shows us how and why sexual arousal and orgasm-two of the most complex, delightful, and amazing scientific phenomena on earth-can be so hard to achieve...

Published by Bee4 , 1 year ago
I have yet to find a Roach book that isn't hilarious and educational. Her perspective and open-mindedness is refreshing and provides a great lens for the reader to learn about various unusual topics through. Though my favorite so far probably remains Gulp, bonk was also phenomenal and lives up to the Mary Roach name. Keep these books coming!

Published by Thriftbooks.com User , 13 years ago
Took a little while to arrive but customer service was great. Every e-mail inquiry I had was responsed to within the same day.

Published by Thriftbooks.com User , 13 years ago
Roach probably found out more about sex while researching this book than she really wanted to find out. Admirably, she has kept her sense of humour about it and delivers a steady stream of witty interpretations and asides to embellish the flow of facts. I should make an effort to warn the reader that this book is not exactly what I was expecting. It is a run-down of the research work and researchers involved primarily with human sex and its functions and dysfunctions. If you are looking for an erudite exposition of the conundrums of the evolution of sex or anything much about non-human breeding strategies, you might like to look elsewhere. Although that would be a shame as you will miss some great entertainment. If you are interested in knowing how we know what people do to each other of a Saturday night, what companies put in cologne to try and attract the opposite sex or what various things can be done to the body in an effort to restore flagging potency, Roach is your woman. (Poor lass actually watched some of the operations, which strikes me as sacrifice above and beyond the call of authorship.) It is, perhaps, surprising just what a range of research into human sex has been conducted. It is all the more impressive in the light of the "moral" climate pertaining to sex in many of the countries in which it was done. One researcher is working in Egypt, which with the rise of Islamist prudery must make it a risky business indeed. Much of the ground-breaking work done in the USA, such as Masters and Johnson and Kinsey's famous work, was done under the 1950s American Taliban climate of combined sexual repression and suspicion of anything vaguely liberal. It cannot have been easy work and has done a great deal to improve the lot of us all, and especially women in relationships with men, so as Roach says, hats and pants off to these heroes. You will probably also find out more about sex than you wished you knew. While this information is often highly entertaining, some of it is enough to make you join a convent, and I registered a cringe coefficient of up to 9.8. It is bad enough knowing that some methods of execution provoke tumescence in the victim, but I could have taken that. I really, really wish I had never heard of the rectovaginal fistula, however. Well worth a read all the same.

Shopkeep, how much for that vaginal photoplethysmograph in the window?

Published by Thriftbooks.com User , 14 years ago
"Not everyone gets their (masturbation study) funding from research grants. Some masturbation professionals get their funding from the sales of Vibrating Port-A-Pussies and Mr. Fred Jelly Dongs." - Mary Roach in BONK "To get inside a lubricated vagina, a penis needs to be hard enough to push against the opening with one to two pounds of force. That is approximately the amount of force required to open a swinging kitchen door." - Mary Roach in BONK Mary Roach is the author of Stiff: The Curious Lives of Human Cadavers, the enormously instructive and entertaining book on the uses to which human cadavers are put. As far as I'm concerned, instructive AND entertaining is about as good as it gets. With BONK, Roach has outdone herself with a read that I couldn't put down. Science pursues sex because, after all, it's what makes the world turn. Roach first establishes the history of the science, which pretty much reached mainstream acceptance with researchers Alfred Kinsey and then William Masters and Virginia Johnson. (An excellent film about the former, starring Liam Neeson, is 2004's Kinsey.) The meat of the book, so to speak, is the wide array of sexual behavior and physiologic functions which scientists have investigated, and which include: the sure sign of female orgasm, the location of the fabled G Spot, female orgasm as a function of clitoral-urethral separation distance, the link between female sexual pleasure and fertility, the validity of the vaginal "upsuck" concept, the validity of the penis-cervix interlock theory, cures for erectile dysfunction, the historical legal implications of male "potency", societal perspectives on masturbation, testicular transplants, penile implants, penis restoration post amputation, the physiology and structure of the clitoris, the internal mechanics of penile erection, orgasm's effect on overall physical health, the value of orgasm as exercise, the role of electroejaculation in people with spinal cord injuries, vaginal lubrication as an indicator of female sexual arousal, the nature of arousal in men vs. women, the physiologic trigger of male ejaculation, the role of hormones on the female libido, the existence of human sex-pheromones, and the qualitative measurement of sex. Juicy stuff, this. The author's special talent, whether it be in STIFF or BONK, is her serious - but not too serious - approach to the subject matter. At any time, the reader may expect Mary to look up from her notes, cock an eyebrow, and deliver some wryly humorous aside. This is perhaps best seen in the footnotes to the text, as in the one connected to the above quote concerning the amount of penile force required for vaginal entry: "We have three Houston researchers to thank for this statistic. In 1985, the trio attached a pressure gauge to the tip of a penis-shaped Plexiglas rod and penetrated a small group of female volunteers. It seems to me that if they wanted to approximate the surface friction that exists in real intercourse,

were you ever in an MRI with a friend?

Published by Thriftbooks.com User , 14 years ago
This a truly great tale of a first-hand look at science and sex from both the inside and the outside! Mary Roach provides a humorous and often very personal view--both as a participant and observer--of humans, animals, and mechanical devices: there is much that you would never have imagined, and perhaps would rather never of heard of at all. She and her husband Ed have sex in a 20-inch diameter MRI tube in the interests of science. The doctor looks on, makes suggestions, and finally tells Ed "You may ejaculate now". The author also recounts the experiments by Kinsey is his attic many years ago and tries to track down the film footage. The author's great sense of humor needs to be read to be believed. She spares no one, and particularly not herself or her husband. She travels to Taiwan to watch an implant operation. In one of the funniest parts[and this says a lot, since the book will have you howling a lot] she goes to Denmark to watch artificial insemination of sows. We know this happens with cows, and you might suppose that there's not much difference with pigs, but you'd be wrong, very wrong indeed. Suffice it to say that the best results occur, when, among other things best not mentioned here, the AI person lies down on the sow's back and fondles her teats during the process. You may never regard your morning sausage quite the same way again. The author has a lot of asides that are a delight to read. If you usually skip the footnotes in a book, you'll miss a lot here. You'll learn a lot--for all the things that might seem frivolous, but which are not, the book is a scientific one. Roach has a curiosity, an appetite for knowledge, and has the capability that perhaps most scientists do not have, which is to mix science and humor. Stephen Gould was able to do this, but his humor was not as pervasive--his writing is, at a guess, 95% science at 5% humor, whereas with Roach it's more like 50-50. Martin Gardner's great Fads and Fallacies in the Name of Science may be the closest similar work to Roach's book. This book is certainly not for everyone, and there are those who will be deeply offended, but for most it should be a real treat to read!
Trustpilot
Copyright © 2022 Thriftbooks.com Terms of Use | Privacy Policy | Do Not Sell My Personal Information | Cookie Preferences | Accessibility Statement
ThriftBooks® and the ThriftBooks® logo are registered trademarks of Thrift Books Global, LLC